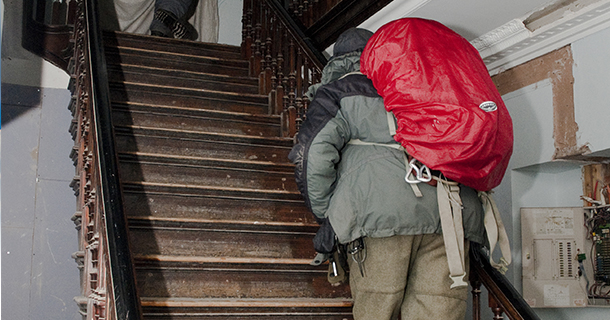 In March, board member Andres Perez held a teach-in on how to wrest “control” of vacant apartments. He called it “homesteading.”

“The best time to enter a building is in the late hours,” he advised a group of about 20, who gathered in front of the half-empty East New York housing complex Arlington Village.

“You make sure you have your proper tools. You remove the chains and padlock, and then you go in.”

He then led them through the next steps -including filling out a change-of-address form at the post office and setting up utilities. After that, “nine out of 10 times the courts will allow you to be able to have control of the property,” he said.

“I can’t let nobody squat where I live,” said Pete Rolon, 64, a 35-year resident who claimed pimps had grabbed two apartments in the complex. “There were hookers. They were smoking crack. There were condoms all over the floor. There were hundreds of them.”

He remembers when the complex of 12 two-story, red-brick buildings was filled with families and children playing.

Police and residents eventually forced the sex-trade squatters out last fall, according to Rolon.

Mohammed Hossain, the superintendent at Arlington, where pads go for $600 to $1,000 per month, said complaints about homeless people breaking in to steal pipes and metal fixtures are common.

“The homeless people, they have no right to be squatting here,” he said. “If they pay rent, that’s different.”

“That’s not right,” said one longtime resident. “That these guys are teaching classes on this-that’s ridiculous.”

The Website for Picture the Homeless boasts a list of accomplishments that includes sending “delegations to the World Social Forum in Brazil.”

Perez, 46, a former city Housing Authority worker, said the group has “two major campaigns.” One is dedicated to opposing the NYPD’s “stop-and-frisk” policy. The other involves schooling people about “warehoused” property.

Homesteading, he lectured, is a permanent occupation, while squatting is only temporary “club housing.”

Picture the Homeless’s annual taxpayer funding is approved by the City Council and administered through the Department of Housing Preservation and Development.

Bederman added that his agency has no control over Picture the Homeless’s funding. “It’s the City Council’s decision,” he said.

Robin Levine, a City Council spokeswoman, said, “We’re deeply troubled by reports that Picture the Homeless is instructing New Yorkers in how to engage in dangerous and illegal activities. If these reports are in fact true, they call the group’s entire funding into question.”