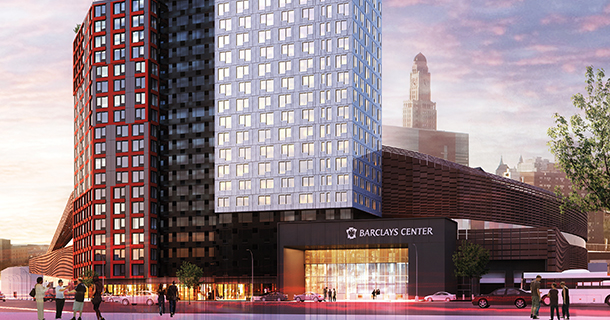 Two years ago, Bruce Ratner sought to ease a shrinking budget and appease swarms of critics who lambasted the original rendering for a residential tower at Atlantic Yards in Brooklyn as a “Lego-like” atrocity.

Like a frustrated schoolboy, he punted the plans to erect a set of oddly arranged giant blocks, shoving designer Frank Gehry aside and bringing in a team of modular consultants who-ironically, given the reputation of modular buildings-transformed the blueprint into a much sleeker 32-story structure.

“It will be beautiful,” Mr. Ratner said at the groundbreaking last month. “You do not have to compromise on design when you build modular, and this building will prove that.”

The success of the B2 building, set to become the tallest modular building in the world, will serve as a catalyst for the growth of modular construction among high-rise and commercial buildings, a market that has exploded elsewhere in the world and that modular builders in the United States have hoped to tap into for years.

“There is no such thing as site building anymore,” said Tom O’Hara, director of business development at Capsys Corporation, a modular builder. “Every single site is using prefabricated construction. Something is componentized, whether it’s the roofing or the doors. Modular takes that one step further-it’s the zenith of that process.”

The 32-story, 363-apartment B2, which will almost rub up against the new Barclays Center, is one of 15 modular towers said to be coming to the site. Like other modular buildings, much of it is being manufactured in a factory setting, and it will eventually be hauled nearly two miles from the Brooklyn Navy Yard and snapped together on-site.

It’s unlikely that 32-story modular buildings will begin popping up across the city anytime soon, but Ratner’s decision shines a spotlight on a building method that has existed for decades.

Proponents of the method have treated modular design as gospel for years, and real estate industry professionals (even those not directly involved in modular building) agree that the cost and time savings afforded in smaller-scale projects translates into larger, taller buildings.

“It’s one of the best-kept secrets in the real estate industry, but I think that this building will change that,” said Amy Marks, owner and president of XSite Modular, the modular consultant on the Atlantic Yards project. “If you’re building a building today and not considering some sort of modular or prefab, you’re missing out on a tremendous value.”

Modular buildings consist of multiple sections, or modules, that are built in a remote facility and then delivered to a construction site and assembled. Because components are created in a factory setting, the method can save time, money and reduce water and energy consumption.

Modular builders procure less-expensive materials from a range of global distributors. While the controlled assembly line-like environment offers factory workers a steady 9 to 5, they are generally paid much less than their on-site counterparts. On-site carpenters earn as much as $50 more in wages and benefits, some experts said.

Consultants on the B2 project have said modular design will shave 10 months off of the 28-month construction schedule, and others said a fully modular design could cut the schedule by as much as 50 percent.

“Whether that means hospital are getting patients into beds sooner, or landlords getting tenants faster, that makes a big difference,” Marks said.

The B2 isn’t the first building to thrust modular design into the public eye. In 2009, a 24-story, $34 million high-rise dormitory was completed in Wolverhampton, England, in less than 12 months, becoming the tallest modular building in Europe. And several years ago, China set off a firestorm in the industry when it started building modular hotels and completing the projects in a matter of days.

The 902 modules used in the Wolverhampton tower and adjacent lowrise units were constructed in Cork, Ireland, before being transported to the construction site, culminating in 657 student bedrooms and 157 postgraduate apartments. The construction would have taken twice as long using conventional on-site methods, its developers said at the time.

While modular building dates back at least a century, it gained national attention as troops returned home after World War II, when it became the preferred building method for housing in rural and suburban settings across the United States.

The 1960s and 1970s gave rise to more complicated designs as consumer demands became more sophisticated, and in the 1980s, even more intricate modular homes began to take shape across the Northeast, in New Jersey, Pennsylvania and, to a lesser degree, New York.

“The New Jersey suburbs are full of beautiful, custom-designed houses that were executed in modular factories,” O’Hara said. Slowly, modular seeped into the commercial industry, becoming popular for building low- to mid-rise structures-affordable housing, hospitals and other medical facilities, schools and office complexes-with companies like Capsys, Deluxe Building Systems and NRB among those paving the way in the Northeast.

But it was buildings like the one in Wolverhampton and those in China that highlighted the dreams of modular hopefuls and captured real estate’s collective psyche, slowly convincing developers like Ratner that modular is viable for high-rise buildings. Ratner admitted that a YouTube video of the 15-story Ark Hotel being erected in China in two days (the building was ultimately completed in six) was the last straw.

“That was the icing on the cake,” Ratner told The New York Observer in December 2012.

In December 2011, Broad Sustainable Building Corporation, the same company that built the Ark, completed the 183,000-square-foot, 30-story Tower Hotel just outside Yueyang in China’s Hunan Province in 15 days. It was reportedly built to withstand a magnitude-9.0 earthquake.

Given the space constraints in a city as densely packed as New York City, transporting modular buildings to certain parts of the city is simply impossible-and adding modular components into a renovation project can be a insurmountable challenge as well (imagine trying to haul four stories of a Midtown high-rise through the Holland Tunnel, or hoisting fully constructed kitchens into an existing office building).

But most agree that incorporating at leastcertain elements of modular design is beneficial, with firms across the city opening up to the idea.

“It’s something that needs to be embraced, just like any other option we have in our arsenal,” said Scott Spector, a principal at the architectural firm Spector Group. “I think there are pieces of it we can use, and we’ve definitely incorporated it, but it depends on the aesthetics and the type of space.”

Spector believes warehouse and suburban office environments are ideal for modular building. It also has its place in larger commercial buildings, in terms of sophisticated video teleconferencing or “telepresence” units, and for certain specialty conference rooms that incorporate glass partitioning not built on-site.

“You would never know it wasn’t built on-site with five different trades coming in,” Spector said. “Instead the panels are made in a factory, and there’s no way you can tell if it was done on-site.”

But Spector remains skeptical about its use in commercial high-rise buildings. The menu of options a modular builder can provide often do not fulfill the requirements of owners-or the creative aspirations of conventional architects, he said. It’s something like being limited to the dollar menu at McDonald’s-it’s definitely cheaper, but it’s not surf and turf.

“You lose the more detailed design and customization options, and that is one of the things that make modular design difficult in a commercial setting,” he said. “I just can’t tell you that they would give me all of the options that I want, it doesn’t lend itself to the type of architecture on these custom-designed office buildings being built in the city.”

The B2 agreement reflects an “innovative approach to development that will allow us to realize the vision of the Atlantic Yards project and create traditional construction jobs that may otherwise have been at risk,” said Gary LaBarbera, president of the Building and Construction Trades Council of Greater New York, when the deal was announced.

O’Hara, the director of business development at Capsys Corporation, agreed.

“To a certain degree, our people used to work in the field,” he said. “There’s no reason a carpenter or electrician working in the field can’t come work for a company like ours.”