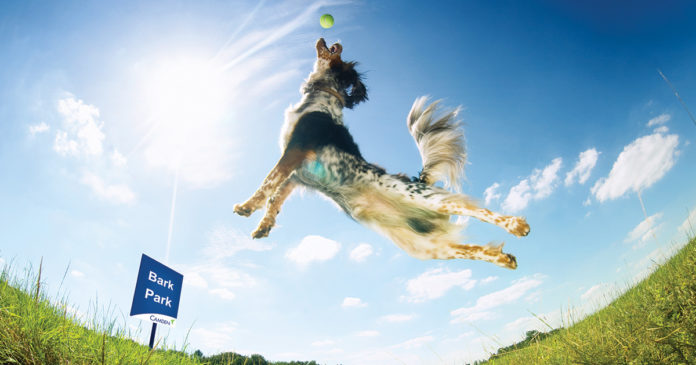 “It’s an absolute requirement to have a dog park in a new development if you want to be competitive in the market today,” said Camden Chairman and CEO Ric Campo in mid-March.

The apartment company that would probably win top honors if there were a contest for excellence in dog park development is installing pooch playgrounds in all new developments and most redevelopment projects.

And, while they are listed among community amenities on apartment communities’ individual websites, dog parks are great marketing tools, which is the main driver of Camden’s plan to be as pet-friendly as possible.

“The market is driving the decision,” said Campo. “People have pets and they’re very interested in their pets, so it’s definitely a marketing thing,” he said.

He believes the REIT’s policy of welcoming pets both attracts new residents and helps with resident retention. “It does attract residents to our properties when we advertise on the Internet and our web site that we are dog-friendly and pet-friendly,” he said, estimating the REIT has around 17,000 canine residents.

While Camden doesn’t have to worry about occupancy, which averaged 95.1 percent across the portfolio in Q4 2012, the young professionals that Camden targets tend to stay longer these days if an apartment community welcomes their pets, which helps reduce turnover costs.

And, with the increase in apartment development, fueled in large part by the growth of the prime-renter-age demographic that is expected to keep apartment occupancies at healthy levels well into the future, the importance of differentiation from other multifamily options in a given market has increased as well.

iPod docking stations, high-end fitness centers and gathering places for the socially-oriented Echo Boomers have become the industry standard for urban Class A apartment communities, and now dog parks and other canine amenities are joining that list.

Household size nationwide has been declining for decades, from an average of 3.5 people per household in 1970 to 2.4 people today, and it’s singles who are driving up the dog ownership numbers. The American Veterinary Medical Association estimates that pet ownership among women and men living alone has increased some 25 percent since 2006, with single women far more likely to own pets than men.

Divorce, delay of marriage and childbearing, and the increase in single-person households are part of the fragmentation of traditional social networks that leave people isolated, turning to pets to fill the loneliness gap.

Camden’s first fenced area for off-leash dogs was built some six or seven years ago, but the REIT has been putting out the “pets welcome” mat for much longer.

“We had a property in Las Vegas in the mid-90s that we were having a hard time marketing, so we started marketing to pet owners. So, we’ve been pet-friendly for at least 15 or 20 years,” said Campo.

“But dog parks, as sophisticated as they are now, probably are a five- or six-year-old phenomenon,” he estimated.

“People are getting married and having children later, and pets are a big part of filling the void that kids did when I was young. Twenty-five or 30 years ago, the average age of marriage was in the early 20s, and most people had kids in their early 20s or mid-20s. Now, it’s the late 20s and early 30s,” Campo said.

“I don’t know if pets are replacing children or it’s about companionship and fun, but it’s a huge part of today’s lifestyle and, if we’re trying to create a very positive and good-feeling community, we have to involve the pets,” he said.

Camden is more lenient about the size of dog allowed than most other apartment REITs. While some apartment companies increase pet deposits based on dog size, more than half of Camden’s apartment communities have no weight restrictions and the rest mostly range from 25-pound to 100-pound maximums.

“The more dense the property, the more weight becomes an issue,” Campo said. “We try not to be one-size-fits-all. A 30-pound dog is not necessarily better than a 50-pound dog. A Chihuahua can bite or damage a place just as badly as a 100-pound dog can.”

“Sometimes high-density properties and highly urban properties work better when you have smaller dogs vs. bigger dogs. So, we do try to customize our rules for the environment that we’re in. Generally, that is done by our district managers in the field. What works in Houston doesn’t necessarily work in downtown D.C. three blocks from the White House,” he explained.

In fact, dogs don’t work at all in two of the company’s D.C. communities, the 105-unit Camden Grand Park that is located just a block from the White House and the 198-unit Camden Roosevelt just a mile north. They are among a handful of Camden communities that either don’t allow pets or allow only cats.

And, while the weight limits are enforced at the Camden communities that have them, the company is mostly concerned with keeping residents happy, so there is no one weighing each dog when they come into the office.

“We try to be as flexible as possible to make sure you have a positive experience with Camden. If your dog gains a little weight, that’s OK,” Campo said of his company’s easy-going approach to the weight limit issue.

But, Camden isn’t so easy-going about canine troublemakers. “You have to think about the other residents. If you have a very aggressive, barking dog, we’re going to have a problem with that because it’s going to disturb other residents.”

“So, you have to play enforcer when it comes to a bad or noisy dog, and you also have to deal with noisy neighbors, whether they’re four-legged or not,” he said.

In addition to including dog parks among community amenities at many of the 192 properties in the REIT’s 65,005-unit coast-to-coast portfolio, Camden also provides canine-focused amenities like dog walks with convenient pet stations along the way, dog runs and pet washing stations.

The addition of a dog park to an existing community is not hugely expensive. “The average cost to build a dog park on an existing property can be very low. It can be a couple of thousand dollars and just involves fencing off an area of turf, or an area where you can allow the dogs to socialize and run around without a leash,” said Campo.

But, dog park designs can get fairly elaborate in a new development, with double entrance gates that provide double ingress and egress to keep dogs from taking off when the gate is opened.

“As you create more amenities, like dog washing stations and those sorts of things, you get the cost up into the $30,000 to $50,000 range. But, when you think about it in the scheme of the total development cost, it’s not really that big compared to the overall cost. Dog washing stations can run anywhere from a couple of thousand dollars to $10,000. It just depends on how elaborate it gets and how you build it,” he said.

Dog washing stations benefit both residents and landlords, he continued. “A lot of people wash their own dogs. We’d rather have them washing in a station that traps the hair and not have it go down the drain in their bathtubs. It’s almost preventive maintenance for your properties,” he said.

A properly configured dog wash, Campo explained, is designed with ramps so dog owners don’t have to bend over when putting pets into washing stations that are set up for various sizes of dogs. “You can walk them up into the station, shut the door, and then wash them off,” he said, adding that washing stations often provide soap.

“We have some stations with electrical outlets, so you can bring blow dryers to dry the dogs afterward,” he said. “Some of the washing stations even have lights for night-time bathing.”

Camden is installing dog washing stations in each new development in the pipeline right now, and adding them during redevelopment of existing communities. “People want them,” he said.

Camden’s use of artificial turf, like football field turf, also helps keep dogs clean. “When you use dirt, real grass, wood chips and things like that, the areas tend to get soiled. When it rains, the areas get dirty and the dogs get dirty. Artificial turf works better because it can be cleaned efficiently and it doesn’t get the dogs dirty,” Campo explained.

“It’s not very expensive and, if it’s done right, it really lasts a long time,” he said.

The artificial turf doesn’t turn brown in the winter, and drains installed beneath it allow for regular washing that prevents long-term maintenance issues. The more elaborate dog park designs also provide tools like pooper scoopers and bags to make cleaning up after a pet easy.

“I was touring our high-rise building in Ft. Lauderdale yesterday,” said Campo. “Because the community is around 10 years old, canine-focused amenities were added later, including a dog walk and washing stations. I asked the manager how many dogs we had there and she estimated 150.”

At another high-rise Camden property on Brickell Avenue in downtown Miami, where 400 apartments are housed on an extremely tight site surrounded by urban retail, Campo found a very creatively designed dog park. “It was probably 20 feet long and triangular. The tip of it was four or five feet wide and the widest part was probably eight feet wide. They fenced it in and made a small place right by the entrance to the parking garage. When I looked, there were six dogs in there,” he said.

“So, we’re definitely putting them in everywhere we go,” said Campo.

In addition to the benefits of exercise and socialization for dogs, pet parks can be a great place for residents to get to know one another.

“A dog park is not only a place for pets; what happens is that people socialize there in a big way. When you get into the 25- to 34-year-old age group, dogs can be dating tools. You go to the dog park and have your pet with you. You can communicate and have fun with your neighbors, and there’s a fair amount of community interaction that goes on.

“I’ve heard lots of stories anecdotally about dogs being used as a dating tool or a socialization tool,” said Campo.

Camden may be a pack leader in the dog park phenomenon, but private companies across the nation are catching on to the phenomenon, as well. Wood Partners started construction last April on the $34 million, 260-unit The Bristol in Morrisville, N.C., with plans to include a dog park among the community’s upscale amenities. The Praedium Group, a New York-based investment firm that recently purchased the 15-year-old, 456-unit Magnolia Station Apartments for $36.5 million in Charlotte, N.C., in partnership with Charlotte-based Grubb Properties, plans to add a dog park as part of a $400,000 spruce-up of that community’s amenities package.