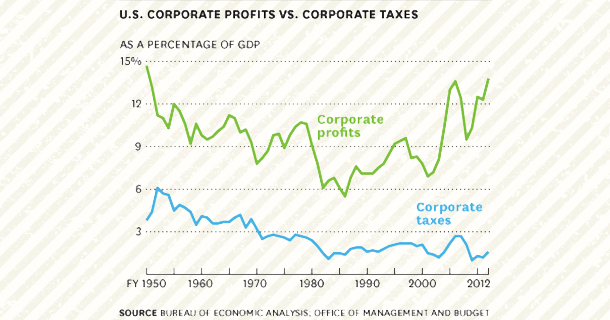 On the assumption that, while this story will wax and wane over the coming months, it’s not going away, here’s some context (for you headline purists, the final two items are admittedly at least as much opinion as fact):

Corporate profits are taxed twice. When a corporation makes a profit, it’s subject to corporate income tax. When it then distributes that profit to shareholders as dividends or buybacks, it gets taxed again as dividends or, eventually, capital gains. This isn’t the only double tax out there: Most of us in the U.S. pay income and/or payroll taxes when we earn money, and sales taxes when we spend it. Also, a lot of corporate shares are owned by tax-exempt pension funds, 401(k)s, and university endowments that don’t pay taxes on dividends or capital gains. But it’s worth remembering that the corporate income tax isn’t the only tax on corporate income.

Economists hate the corporate income tax. Double taxation is one issue. Another is that a tax on corporations is generally a tax on productive investment, and economists think we need to invest more in productive things (as opposed to say, housing). Yet another is that corporations are more mobile than individuals, and taxing them might cause them to move their operations elsewhere. Some also argue that taxes on corporations end up falling most heavily on those corporations’ employees. And there are other objections. One can find economists of widely varying political beliefs who think the optimal corporate tax rate is zero, or at least much lower than it is now.

Economists can be kind of naive. If the corporate tax rate were zero, we would all incorporate ourselves. Accountants, tax lawyers, and economists who actually spend time around the tax system point out that when you eliminate one form of taxation, you have to raise rates on other taxes to make up for the lost income, and those higher rates increase the incentives for tax avoidance and evasion. That means we should want a broad tax base and low rates. Along those lines, most developed countries tax both corporate income and shareholder income, but to make up for the double taxation and other issues they tax them at lower rates than they do other income. In the U.S., though, while dividends and capital gains are taxed at lower rates, corporate income tax rates have remained stubbornly high.

U.S. corporate tax rates are the world’s highest. Since Japan lowered its rate last year, the U.S. has had the highest corporate income tax rate in the world, with a combined federal and state average of 39.2 percent. This doesn’t mean most U.S. corporations pay that high a rate-over the past three decades the share of corporate profits going to taxes in the U.S. has actually declined substantially even as official rates held steady.

That’s partly because, starting in the Reagan years, lawmakers leery of the political backlash from lowering corporate tax rates found other ways to cut corporate income taxes, mainly through various provisions allowing corporations to write off capital investments quickly. It’s also because the share of U.S. corporate profits coming from overseas has risen steadily, to 24 percent of the total in 2011 from 3 percent in 1950.

Finally, while it’s hard to quantify, it seems likely that corporations have gotten far more aggressive over the years at finding ways to minimize taxes. None of which changes the fact that the statutory corporate tax rates in the U.S. are, by global standards, really high. The corporate income tax is the only tax of which I’ve heard economists other than Arthur Laffer argue that it might be on the wrong side of the Laffer curve-that is, that lowering the rate could bring in more revenue.

The U.S. is especially aggressive about corporate taxes. Most developed countries now have what are called territorial tax systems, where an individual or corporation just pays taxes on the income earned in that country. U.S. citizens and U.S.-domiciled corporations, on the other hand, are taxed on their global income, with credits for any taxes paid overseas. But-and this is a big but-corporations don’t have to pay tax on their foreign earnings until they bring the money back to the U.S. This creates strange phenomena like the huge foreign cash stashes held by companies such as Google and Apple. It also leads to calls to switch to a territorial tax system in the U.S., which would at least remove this barrier keeping American companies’ overseas earnings from coming home in the form of new investments or (more likely) dividends and buybacks.

Foreign income is great. Stateless income isn’t. The fact that U.S. corporations are getting a bigger share of their income from overseas isn’t necessarily a bad thing, and the fact that different countries charge different corporate income tax rates isn’t such a bad thing either. A growing global economy is good for the U.S., and tax competition between countries can be healthy. But the new twist, available to multinationals such as Apple, Google, Microsoft whose earnings flow mostly from intellectual rather than physical capital, is what USC law professor Edward D. Kleinbard has dubbed “stateless income.” These are corporate profits that are never taxed anywhere thanks to extremely aggressive corporate tax planning and quirks in, in particular, Irish and Dutch tax laws (the “Double Irish With a Dutch Sandwich” is a favorite tax-avoidance technique). This may be legal, for the moment. But it appears to go against the spirit of the tax laws even of low-tax Ireland.

Corporations (probably) can’t have their cake and eat it too. Apple’s Tim Cook told Levin’s subcommittee Tuesday that “we not only comply with the laws, but we comply with the spirit of the laws.” Actually, what Apple is doing is taking advantage in the inability of tax law and international tax treaties to keep up with rapidly changing economic reality and highly creative tax lawyers-it’s complying with the lawlessness, basically. Legally, that may amount to the same thing. Ethically and, more important, politically it probably isn’t. Apple’s shareholders would really love it if Congress moved to territorial taxation or declared a tax holiday that allowed Apple to bring home its $102 billion in overseas cash taxfree. Corporate America in general would love it if Congress lowered the corporate tax rate. And it appears likely that all of us would be better off with lower corporate rates and a tax setup that didn’t discourage American corporations from bringing their money home. But as long as Apple, Google, and their ilk keep trying so hard to keep so much of their income out of the reach of all tax collectors everywhere, it’s hard to see elected officials budging.

Author: Justin Fox is of The Myth of the Rational Market.