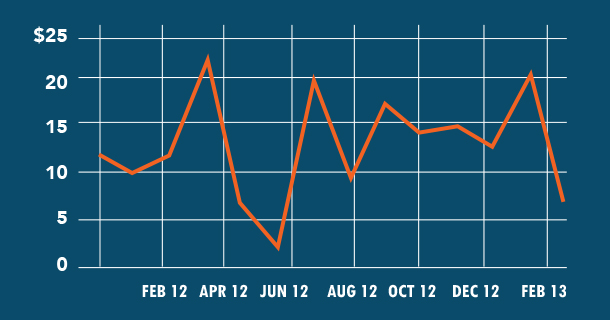 The consumer credit reading includes most short and intermediate-term credit extended to individuals. It does not include loans secured by real estate, so mortgages and home equity lines of credit are excluded.

They break down credit into two categories: revolving (credit cards) and non-revolving (typically car loans and student loans). While the consumer credit numbers don’t explicitly take into account mortgages, the trends in consumer credit translate into mortgage origination, as well. All signs point toward easier access to credit.

Student loans have been increasing, which pushes up non-revolving debt. The reason for increasing student debt has been partly driven by a difficult job market as many students opt for graduate school after they are unable to find a job. This is being borne out in the low household formation numbers, which have fallen dramatically since the housing bust.

Right now, the government, directly or indirectly, touches 90 percent of the mortgages currently being originated. The only loans that are getting completed outside of Fannie Mae/Freddie Mac and Ginnie Mae loans are super high quality jumbo loans.

Put simply, unless you can fit into a conforming or government loan, you are probably not getting a mortgage unless you have 60 percent equity in your home and have a mid-700 FICO score.

We are starting to see the mortgage market thaw for people who had previously been unable to qualify for a mortgage. Redwood Trust (RWT) had been the only issuer of private label (non-government) mortgage backed securities until very recently. Now other bankers are doing deals.

We have seen two additional jumbo securitizations in the past couple of weeks, and we have even seen a sub-prime deal as well. The stated income loan is probably the next product to be introduced; these products are completely dependent on the securitization market. Finally, once we get some regulatory certainty out of Washington, the market should begin to really open up.

Home builders, such as KB Homes (KBH), Lennar (LEN), and Toll Brothers (TOL), are highly sensitive to mortgage origination. If their customers cannot get credit, their activity falls off. The thaw in the mortgage market can only mean good things for home builders. Stated income loans (loans to small business people who don’t have a steady W-2 salary) are going to drive a lot of future purchase activity.

As credit improves, increased consumption should drive economic growth, which should translate into job growth for workers in their 20s.