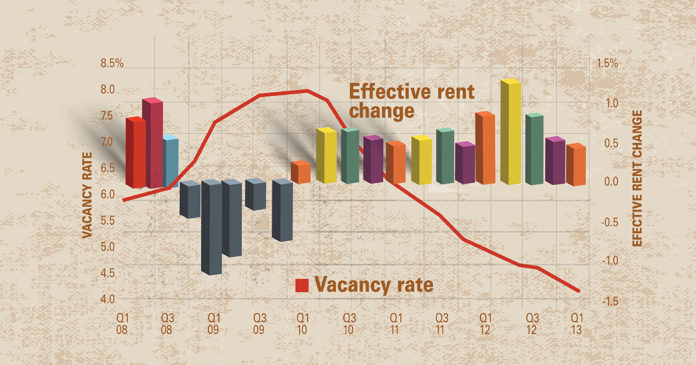 Hundreds of thousands of units are on the verge of being complete, prices in the housing market are improving and the economy is doing better than it once was, and some believe those factors will act to create a migration from the multifamily sector.

Vacancy rates continue to drop for now, but analysts warn that the next few quarters could reveal a shift in a new direction.

According to preliminary first quarter 2013 results from Reis, apartment sector fundamentals continued to improve, with vacancies dipping into the low 4 percent range. Asking and effective rents continued to increase, but there are some signs that improvements in fundamentals are decelerating somewhat.

The sector absorbed over 36,000 units in the first quarter, a relatively healthy rate comparable to the rise in occupied stock from one year ago (in the first quarter of 2012). Deliveries have remained modest at 13,706 units, representing roughly the same pace of inventory growth as previous first quarter periods over the last two years.

Apartment landlords have another quarter or two to enjoy tight supply growth before a large number of new properties come online. Over 100,000 units are expected to enter the market, most scheduled to open their doors in the latter half of the year. With home prices recovering and mortgage rates staying low, it remains to be seen whether demand for apartments will continue to push vacancies down once inventory growth ramps up.

What does this mean?

However, given how tight vacancies have become, rent growth ought to be stronger. Analysts have wondered how rents could keep climbing when jobs are being created at a sluggish rate and wage growth has been relatively stagnant: all of Reis’s major markets now boast rent levels well beyond peaks achieved prior to the recession.

One answer is that the moribund housing market left households with little choice but to absorb rent hikes, but with the housing market now recovering, does that mean the tide is turning against landlords?

The next few quarters will test the robustness of apartment fundamentals in the face of rising supply growth and rent levels that may have climbed to unsustainable levels.

New York remained the tightest market in the country, boasting a 1.9 percent vacancy rate (vacancies declined by 20 basis points this quarter). New York is followed by eight other markets with vacancies under 3 percent; for many markets around the country, vacancies are at lows unseen in at least a decade. 67 out of 79 markets registered improvements in occupancy for the quarter.

On a year over year basis, every single metro out of Reis’s 79 top markets posted increases in asking and effective rents. However, quarterly numbers reveal some potential weak points. First, Washington, D.C. registered a small but negative trend for effective rents, declining by 0.1 percent. This is the first time Reis has recorded a decline in effective rents in Washington in four years; not since the first quarter of 2009 did effective rents fall in Washington-and even then, during the worst recession in recent history, effective rents only fell for one quarter before resuming its steady march upward.

While a single quarter’s results do not necessarily imply a dismal trend, sequestration discussions are expected to impact MSAs like Washington disproportionately. The nation’s capital is also plagued by the prospect of a large number of new projects coming online this year and next, with over 3,000 units expected to open their doors in 2013 alone-the largest increase in supply growth on record in over 30 years of Reis history for the metro.

Over the next 12 to 24 months what happens to Washington will be indicative of how evolving rates of demand for apartment rentals and supply of new projects determine the trajectory of fundamental variables like rents and occupancies.