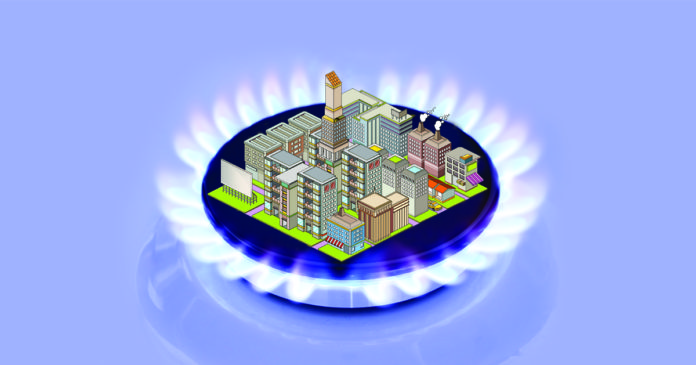 Increasing use of this cheap, clean gas means power stations across the country have reduced their carbon dioxide emissions to levels not seen since 1992-despite serving a population that has grown by almost a quarter since then. On a per capita basis, carbon dioxide emissions from power stations are now at their lowest since President Eisenhower left office in 1961.

This is because, when purged of impurities, natural gas (which is more or less pure methane) is the cleanest fossil fuel around. It produces 30 percent less carbon dioxide per unit of heat than gasoline does, and 45 percent less than coal. Conventional coal-fired power stations churn out 900kg (1,980 pounds) of the gas for every megawatt-hour of electricity they generate. Natural-gas plants emit little more than half that amount.

Given such remarkably cheap natural gas, the outlook for coal is dire. On average, coal-fired power stations still produce the cheapest electricity. And between them, they still account for 37 percent of the electricity generated in America (compared with 30 percent from natural gas, 19 percent from uranium, 7 percent from hydro, 5 percent from renewables and 1 percent from oil). But coal-fired stations, with their belching smokestacks, are notorious polluters, and face tough new air-quality standards that will render many older ones uneconomic.

The EPA’s more stringent standards include lower emissions of nitrogen oxides, sulphur dioxide, soot and mercury. At present, natural-gas plants produce only one class of emission-nitrogen oxides-that exceeds the new EPA thresholds. Many coal-fired plants exceed all the proposed thresholds, says Lincoln Pratson, leader of the study team at Duke. That will make it more expensive-prohibitively so, in many cases-for them to comply.

Industry has got the message. A year ago, Southern Company of Atlanta, Georgia, long one of America’s biggest operators of coal-fired power stations, generated more electricity from natural gas than it did from coal. In 2010, power-plant owners across America announced plans to retire over 40 gigawatts-roughly 12 percent-of their coal-fired capacity in favor of natural gas.

As the transition to gas gathers pace, the need for a more comprehensive network of pipelines and storage facilities has become apparent. Such infrastructure would also assist a second-and in some ways more radical-shift in the way gas is used. For it may be the future of road transport, too.

American commercial vehicles already use a lot of natural gas. For several decades now, local-delivery vans, buses and rubbish collectors, which rarely stray far from their refuelling stations and operate mainly within towns, have been switching to compressed natural gas (CNG) to lower fuel costs and to minimize their impact on the environment. Long-distance haulers would do likewise if there were more highway filling stations with CNG pumps. All of which is encouraging for natural-gas producers. But for real change to happen, private motorists will have to follow suit.

They might be tempted. At an equivalent in energy terms of around $2.20 a gallon, CNG costs a little over half what Americans pay for gasoline. But making the change is not easy.

First, only one car model designed to run on CNG, the Honda Civic GX, is currently available in America. And it is not cheap. The basic model costs $26,300 compared with $18,200 for a comparable gasoline-engined Civic.The two models have similar fuel economy (31-32 mpg-on the combined city/highway cycle), but the GX is nowhere near as spritely as its gasoline-powered twin.

Second, enthusiasts wishing to retrofit existing vehicles to burn the stuff face enormous hurdles. Kits to do so cost anything from $12,000 to $18,000, and have to be installed by a licensed technician. That is because it is illegal in America for private individuals to tamper with a vehicle’s emission system-which is what has to be done to enable a gasoline or a diesel engine to run on natural gas.

Third, it is not just the up-front cost that puts many motorists off CNG. The paucity of filling stations is an even bigger deterrent. America has around 600 natural-gas stations open to the public, compared with 118,000 gas stations. The Honda GX’s pressurized natural-gas tank (holding the energy equivalent of an eight-gallon gasoline tank) is good for about 240 miles. Trips out of town have therefore to be planned strategically, via CNG filling stations spaced few and far between.

This third objection could be overcome if CNG vehicles were hybrids, able to run on gasoline as well as natural gas. That is one of the goals of America’s Natural Gas Alliance (ANGA), a trade group in Washington, D.C. ANGA has had popular models from half a dozen manufacturers, including BMW, Ford, Chrysler and General Motors, retrofitted to run on both fuels.

Which fuel actually will power the car of the future is up for grabs. A century ago, lead-acid batteries and even steam engines vied with diesel and gasoline as serious alternatives in the emerging automobile industry. Now lithium-ion batteries, hydrogen-powered fuel cells and methanol, as well as methane, are queuing up to take on the older fossil-fuel contenders. Two things are clear, though: there is a lot of natural gas out there; and it is extremely cheap. In both electricity generation and road transport, it will be a hard act to beat.