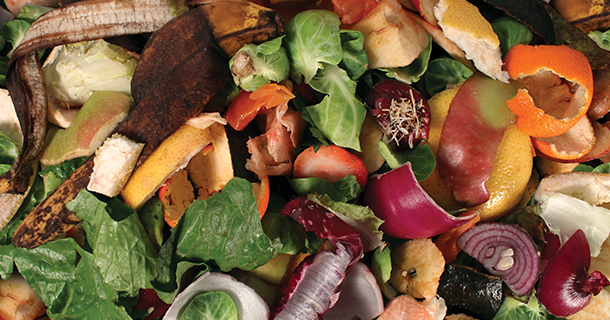 The building on West 57th Street in Manhattan is part of a pilot program in which residents separate food scraps from the rest of their waste.

The Helena is a shining example of New Yorkers aiding composting efforts from their apartments-a practice that Mayor Michael Bloomberg will mandate as he initiates plans to hire a composting plant to manage residential food waste and directs the city’s sanitation department to collect food scraps curbside. By 2016, all New York City residents will be required to separate their food waste for collection to be composted.

According to Eric Goldstein, senior lawyer at Natural Resources Defense Council in N.Y., food waste is the largest single portion of municipal waste in the U.S., with 97 percent thrown into landfills.

“This proposal is very positive because it means we will be able to complete food cycle here and restore food to compost and reuse it as fertilizer or soil stabilizer,” said Goldstein. “If successful, this program will both save taxpayers money, because we won’t need to send food waste to distant landfills, and will be good for the planet.”

Composting occurs when leftover food waste such as coffee grounds, egg shells or apple cores are combined with what are called bulking agents-wood chips, foliage or dirt, allowing the organic materials to break down. The resulting material can be used to create healthy soil, reducing the need for fertilizers and pesticides when growing food.

New York is not the first city to promote composting citywide. San Francisco has a mandatory recycling and composting ordinance, and as a result sends 600 tons of food compost a day to farms and vineyards around the Bay Area, according to spokesman Robert Reed of Recology Sunset Scavenger. Seattle and Portland, Ore., have similar rules.

Linda Corso manages a building in San Francisco that much like The Helena began a composting pilot program before the city made it mandatory. Corso says that New Yorkers can learn from some of the complications San Francisco faced, such as difficulties with food waste bags, compost pick up, educating building tenants, access to compost receptacles and navigating how landlords can enforce separating food waste.

The key, she said, “is making it as easy as possible for tenants.”

When Mara Lowenstein moved into The Helena in May, she was attracted to the building’s location and dog-friendly residents and staff. The compost bin was an unexpected bonus.

“I am someone who recycles anyway so I thought it was wonderful,” Lowenstein said.

The Helena began by providing individual compost bins to residents on five of its 40 floors, as well as access to a larger communal bin located in the trash room on each floor. Eventually the program was adopted on every floor.

“When it first rolled out, there were concerns that ‘Oh, no, it’s going to smell in my apartment’ or that the hallway will stink,” said Clayton Surratt, a resident who attended the first meetings on composting and supported the program since its initial trial.

Despite the worries, Surratt said that, “generally nobody has said this is stinking up my apartment or told me they have vermin or bug infestations, which they previously feared.”

But New Yorkers who have yet to start separating their scraps are not so convinced.

Jennifer Cohn Beugelmans lives in an elevator building in Gramercy Park and does not like the idea of separating food scraps for compost in her apartment. Despite knowing that it is good for the environment, Beugelmans thinks that Bloomberg’s policy is out of touch.

“Most barely have the room for one garbage bin, let alone a recycle bin, and now a disgusting festering compost pile,” she said.

Other New Yorkers are already doing voluntarily what the mayor will soon mandate.

Christine Rico lives in Brooklyn and has been composting her own food scraps for the 12 years. She uses the compost to improve the soil in her backyard where she grows her own food.

Rico says that the nutrients her compost adds to the soil has changed her yard from overgrown and full of trash to “a vibrant place where trees are growing.” Rico has also noticed a change in front of her house.

“It makes a huge difference in how much waste we put on the curb. When we moved, there was a year that we didn’t compost and our trash was much bigger,” she said.

While Rico is a huge supporter of composting, she does have concerns about the mayor’s plans.

“In apartment buildings they take their trash out every day and someone has to manage that,” she said. “It’s important for residents to be on board and know what constitutes good food scraps and what’re bad food scraps. If someone puts batteries in compost, that ruins the whole batch and on a city scale that’s huge.”

Accessibility will be a challenge for apartment dwellers in New York who live in older style walk-ups that do not have trash rooms on each floor, like The Helena does, and there will likely be other kinks to work out along the way. Attorney Goldstein thinks the hurdles are worth the reward.

“New York City’s size and density, combined with the resulting complexities of doing almost anything in New York, show that if you can implement innovative policies on waste here, then other cities around the nation, other large cities, don’t have much of an excuse as to why they can’t at least seriously consider the same waste alternatives.”