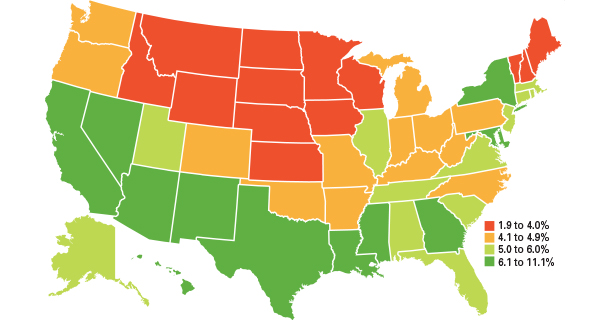 The number of so-called missing households—representing adults who would be owning or renting their own home if household formation had stayed at normal rates since the recession—has increased 4 percent over the past year.

John O’Connor, a 26-year-old lawyer in San Francisco, is one of them. O’Connor has split time at the homes of his mother and father in the Bay Area the past four years while attending the Hastings College of Law at the University of California, where he graduated last summer. He landed a job as an associate litigator at a local firm, but has opted to stay with his parents to avoid paying the city’s notoriously high rents.

O’Connor estimates that renting a one-bedroom apartment would cost him $25,000 a year, after taxes. Staying with his parents has given him more spending money and enabled him to start saving for a down payment on his own home. His sister is also living with his parents while working full time.

“Ultimately, I think the price is right-you’ve got all the amenities of living at home that you wouldn’t have otherwise,” O’Connor said of living at his parents’ homes. “The washer and dryer at your place, the full kitchen all the time, and you’re not living that rugged lifestyle. You get to eat steak and not ramen.”

The analysis on missing households, performed using census data by Jed Kolko, chief economist of real-estate website Trulia Inc., suggests that four years into the U.S. recovery, slow household formation remains an obstacle to a more robust economy. It is damping demand in the housing market, where home sales have been rising but remain below historical levels.

Young adults “have not regained confidence in the economy enough to start moving out of their parents’ homes,” Kolko said. “Even people with jobs are choosing the security of living under their parents’ roof rather than forming their own households.”

Multiple factors lie behind slow household formation. Unemployment remains high, and wages stagnant, particularly for young adults. Many of them lack the down-payments and credit histories needed to qualify for mortgages. High rents, due to rising demand and tight inventory, also are likely limiting household formation. Also, Americans are waiting longer than previous generations to start families, a trend that began well before the recession.

Economists say household formation is closely linked to home construction: If the 2.4 million “missing households” took the leap and entered the housing market-either as renters or buyers-overall housing demand would increase, leading to a pickup in construction.

Builders broke ground at an annual pace of 836,000 new homes in June. That pace is 10 percent higher than a year ago but still far below the long-term average of 1.5 million new homes a year.

More than half of the missing households represent Americans ages 18 to 34 years, Kolko estimated. The rest are split fairly even between those ages 35 to 54, and those 55 and above.

His analysis shows that among Americans ages 18 to 34, nearly a third, or 31.3 percent, lived with parents as of March. That was down from the previous year’s share of 31.6 percent but still far above the 27.4 percent average from 2000 to 2007. The data show that even young Americans with jobs are still more likely to live with parents than they were before the recession.

This pent-up demand could lead to an economic boost down the line when those individuals and families decide to buy or rent their own home. Not only would they then be paying rent or making mortgage payments, but many would also be buying furniture, appliances, home electronics and other goods, while hiring painters and other service providers.

“This key measure of the housing recovery is still near the worst point of the recession,” Kolko said. “Now, the glass half-full view of this is they’re not going to live there forever with their parents, and it means that we’re still probably going to have a surge in housing demand that hasn’t happened yet.”

Some “missing households” aren’t eager to get their own place.

Brianna Pade, a 25-year-old who works in public relations for a software company, says she earns a high enough salary to live on her own but opts to live with her parents in Castle Pines, Colo., outside of Denver.

“It seems this way among my immediate friends,” Pade said. “We enjoy experiences, so if we have to pick and choose and sacrifice certain things, we’d sacrifice living on our own.”