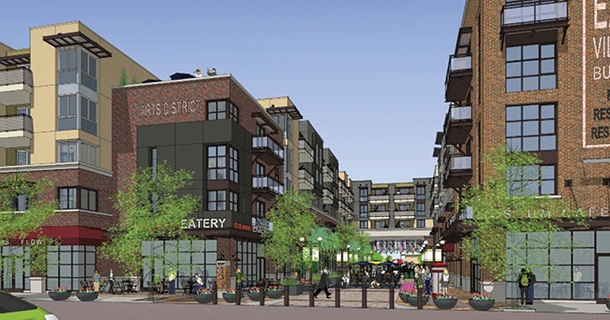 Now it’s back and steaming ahead.

Demolition and of two vacant warehouses on the 2.9-acre site is underway and construction has begun on 320-units.

A condo development received city approvals in 2009, but was delayed because of a sagging economy and a development shift to apartments instead of condos.

Woo renewed talks for the project with Lowe Enterprises a little less than 18 months ago, according to the company’s SVP Tom Wulf. That coincided with MegaToys’ move out of the warehouses—which Woo has owned for more than 20 years—as the company relocated its distribution operations to Commerce, Calif.

And though Woo envisioned a larger, denser condo development for the property, he says that a smaller mixed-use plan made more financial sense for the investors who are backing the project.

The project includes two five-story apartment buildings. The street will be developed into a 15,000-sq.-ft. pedestrian plaza with space for retail outlets and restaurants. All in, the project is slated to cost between $90 and $100 million dollars, according to Wulf. The new project moves forward with a surge of construction in the Arts District.

The project, designed by Togawa Smith Martin Architects, features a primarily brick facade with balconies and other articulations to give it an industrial look. The buildings will be LEED certified.

Units will range from studios to two-bedroom apartments with an average size of 728 sq. ft. Construction is slated for completion in the Q3 of 2015.