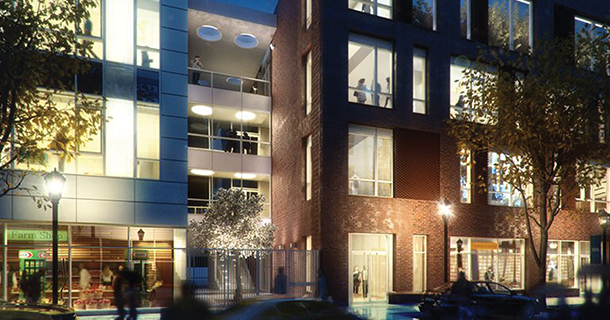 A founding partner and CEO of the Newark-based developer RBH Group, Beit said his shift in vision came from walking into Thrive Academy, a charter school in Newark’s central ward.

“I was blown away by the work they were doing,” he recalled. “The teachers were really energizing, they were focusing on education—I want to harness that energy. These people were top of the class, they could go anywhere for jobs, but chose to go into Newark and teach.”

When it’s complete in 2015, the development will boast three new charter schools and 213 inexpensive residential apartments, all marketed to teachers. The project also includes a retail element with 28 shops, many of which will be storefronts for Newark-based businesses.

The idea is to create a community of teachers who will live in the apartments, shop at the stores, teach at nearby schools and meet with other teachers and their families in plazas designed for collaboration. Their presence will bring energy—and disposable income—to the now run-down area. Designed by star architect Richard Meier, famous for the Getty Center in Los Angeles and the Barcelona Museum of Art, the Teachers Village looks somewhat out of place rising clean from Newark’s streets. But Beit believes the development will “catalyze” the neighborhood; his logic goes that bringing middle-class residents to the city’s depressed downtown en masse is a recipe for a mixed-income, and more vibrant, city.

For Booker, the Teachers Village is emblematic of Newark’s expanding urban renewal—and an opportunity to boast about the progress the city has made under his leadership.

“We’re 3 percent of the state’s population, but one-third of the state’s development is in Newark,” he said at the ribbon-cutting. According to Booker, the Teachers Village alone is bringing “four to five hundred construction jobs” to the city, and its retail outlets, once completed, will add hundreds more jobs.

Wooing investors, the mayor and the developers were able to get the Village constructed for just shy of $150 million—a bargain price given Meier’s big name and the sheer scale of the project. Eventually, the development will consist of six large buildings and will take up almost a full city block. Billionaire Nicolas Berggruen, a quiet celebrity in the investment world known for building infrastructure in troubled areas, is the project’s largest single investor. It was because of his pull that Meier became the Village’s architect.

“He and I have a very close relationship,” Berggruen said of Meier. “Because of the relationship I think he agreed to do something that was maybe not the most economical.”

Beit said Meier, a Newark native was, in fact, the perfect choice. “We want Newark to become a global city. We want the Teacher’s Village to be a destination, and we want to set the bar high for the neighborhood,” he said.

Not all Newark residents are pleased with the project. Outside the invitation-only ribbon-cutting ceremony, police officers held back chanting protesters who attempted to drown out Beit’s and Booker’s speeches.

Some, like Sharif Amerhotep, think the mayor should prioritize money for district schools over building new charters. (Booker, an advocate of school reform, has butted heads with traditional public school teachers’ unions while encouraging the growth of charter schools in the city.)

“I don’t understand why we’re letting these corporate schools in while cutting funding for the district teachers and closing public schools,” Amerhotep said.

Cassandra Dock considers the Teachers Village to represent selfish, showy spending at a time when Newark needs government money for public services. Nearly $100 million in public dollars went to the project in the form of tax credits and school construction bonds.

To her mind, the development was thought up by outsiders, invested in by outsiders and built mostly by workers from outside the city. “Why wasn’t the community included in this?” she said. Beit was candid when confronted with these criticisms. He said the project’s planners looked into leasing district schools for the Teacher’s Village, but most buildings were too big or couldn’t offer the appropriate space.

He noted the Teachers Village apartments, set to begin leasing next year, will be open to district and charter school teachers alike, and the coming retailers will give priority to hiring Newark residents. Eleven of the 28 retail outlets will open their doors in the next several months, with the remainder ready in 2014 and 2015.

While the storefronts are still empty, the Teachers Village classrooms are spiffy and already fully attended. The development’s three charter schools, together serving 815 students through the eighth grade, opened this month.

For Beit, getting those schools open was just the first, if most important, step.

“When we really know we’ve succeeded,” he said, “is when one of the kids comes out of those schools and does something great—for this city, for this neighborhood, for this country.”