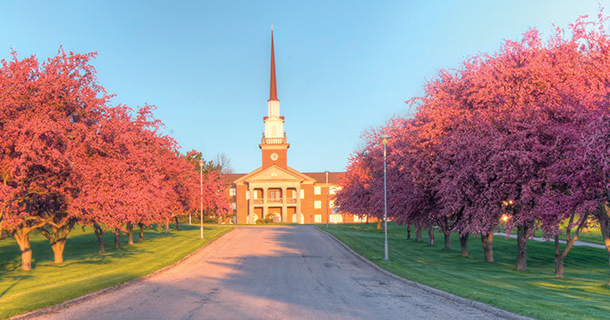 You can still find relics of the building’s school days, but now the space mostly houses the diocese offices, Catholic Charities and the Catholic Herald, among other things. Some past and present priests also call the center home.

“Because this was a high school seminary a lot of these things aren’t needed, at least on a daily basis or a frequent basis by traditional office users,” said Bartylla. “And so the utilization rate of the building is lower than you’d have in a typical office building, but with that comes all the expenses of upkeep and so on.”

We’re told that only about 36 percent of the space is used on a daily basis—but upkeep costs are expected to be around $15 million over the next 30 years.

That’s why the diocese is now looking at leasing the building—for 60 years—and having it redeveloped. “We would move to a different location, probably a more efficient location, more modern type of office facility for our needs as an office and then this building would be repurposed for apartments,” said Bartylla.

Gorman & Company is in talks with the diocese to turn the center into more than a hundred apartment units, though they intend to stay true to the building’s past by applying for historic status. “What we’ve found to be important is to retain the character of the buildings, try to feature elements of the building that indicate what the past usage was,” said Gary Gorman, the company’s CEO. “We love retaining that kind of history of the buildings even though we re-purpose them.”

We’re told that leasing the property out would save about half a million dollars a year. “We’re good stewards of God’s people’s money and we’ve got to be prudent with that,” said Bartylla. He also added that the diocese’s finances are in fine shape.

The groups are hoping for a final agreement in November with construction likely to start next summer.