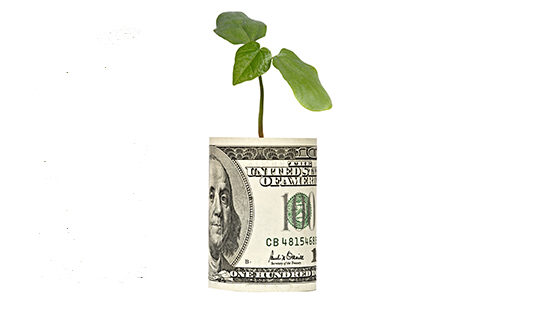 “What we’re hoping for is to engage ratepayers in the effort to fight climate change,” said Mary Nichols, chairwoman of the California Air Resources Board, the state agency that created the cap-and-trade system. “It’s about enlisting more soldiers in the fight.”

The credits will appear as line items on utility bills. Handed out twice a year—in April and October—the payments will vary in size over time, their amounts calculated under a formula approved by state regulators.

They will vary among utilities since the formula takes into account each utility’s number of customers as well as its costs of complying with cap and trade. Pacific Gas and Electric Co. residential customers, for example, will get $29.81 in April, while Southern Calif. Edison customers get $40.

The credits are not just a way to make the public feel vested in the climate fight. They’re also designed to make sure that fight doesn’t give Californians a painful case of sticker shock.

The state’s cap-and-trade system forces power plants and factories to buy “allowances”—essentially, permits to emit carbon dioxide and other greenhouse gases. And while prices have stayed low since trading began in late 2012, with allowances now selling for about $11.50 per ton of carbon dioxide, they will eventually push up the cost of electricity, gasoline and other goods.

Just how much those costs will rise remains the subject of fierce debate.

Price spikes at the gas pump or in monthly utility bills could undermine public support for California’s efforts to fight global warming. So the air resources board devised a way to protect utility customers.

The utilities received large batches of allowances for free, with orders to sell them all to interested parties, including power plants or financial institutions. The money raised would then flow back to utility customers in several ways, including the climate credits.

This year, $750 million from allowance sales will go toward the credits, according to the California Public Utilities Commission. Another $350 million will go to balancing accounts at the utilities themselves to offset the increased costs they face from cap and trade.

As a result, California residents should see no net impact this year in their utility bills due to the carbon trading system, said Edward Randolph, head of the commission’s energy division.

“It’s designed to make sure customers are not inordinately burdened by these programs, and to have the money come back to them,” he said.

The only other carbon cap-and-trade system in the United States has a similar feature. Nine northeastern and mid-Atlantic states have a carbon market that covers only power plants. So far, about 17 percent of the money raised in that market has been spent on “direct bill assistance,” often programs that cut utility bills for low-income families.

While California’s biannual credits won’t be large, state officials are encouraging people to spend the money in ways that will help cut energy use.

Letters accompanying April’s utility bills will encourage state residents to spend their credits on energy-efficient LED lightbulbs or advanced “smart” thermostats. The letters will also direct utility customers to a website, www.energyupgradeca.org, with information on energy-efficiency rebate programs offered by the state.

“They can do things that will both help lower their energy bills in the future and make them a part of the state’s program to fight global warming,” Nichols said. There is, however, no requirement that they do so.

“It’s up to the individual to take that $40 credit as money in the pocket and do something else with it,” she said.