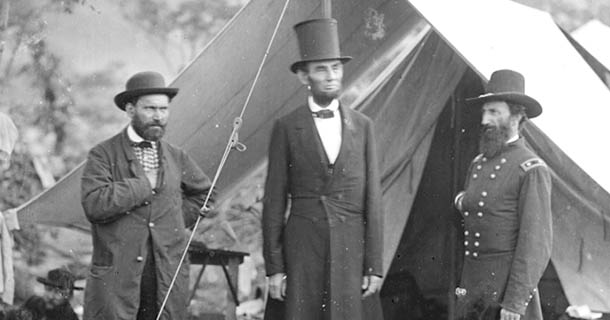 Here’s what Honest Abe did, why it works and how it can make you a better leader.

Get out of the office and circulate among the troops

In 1861 Lincoln spent more time outside the White House than in it. It’s believed he met every single Union soldier who enlisted early in the Civil War. How’s that for being an accessible leader?

Writes Donald T. Phillips in his book,  Lincoln On Leadership: Executive Strategies for Tough Times: “As remarkable as it may seem, in 1861 Lincoln spent more time out of the White House than he did in it. And the chances are good that if a Union soldier had enlisted early in the Civil War, he saw the president in person. Lincoln made it a point to personally inspect every state regiment of volunteers that passed through Washington D.C., on their way to the front; and early in the war they all passed through Washington, D.C.”

Lincoln knew people were his best source of information. And accessibility built trust. He spent 75 percent of the day meeting with people.

“Lincoln was probably the most accessible chief executive the U.S. has ever known. John Nicolay and John Hay, his personal secretaries, reported that Lincoln spent 75 percent of his time meeting with people. No matter how busy the president was, he always seemed to find time for those who called on him,” writes Phillips.

Modern business theory backs him up.

These days the management gurus call it “managing by wandering around.” Seriously.

“Lincoln revealed the cornerstone of his own personal leadership philosophy, an approach that would become part of a revolution in modern leadership thinking 100 years later when it was dubbed MBWA (managing by wandering around) by Tom Peters and Robert Waterman in their 1982 book In Search Of Excellence,” writes Phillips.

Lincoln was always trying to get the best information so he could make good decisions. He was constantly emailing and texting on his iPhone, um, well, the 19th century equivalent of it, at least.

“He virtually lived at the War Department’s telegraph office so he could gain access to key information for quick, timely decisions.

What do CEO’s of the modern era still spend much of their time doing?

The exact same thing Lincoln did: trying to get the information they need to make good decisions.

Says John P. Kotter on What Leaders Really Do: “The GMs do not limit their focus to planning, business strategy, staffing, and other top management concerns. They discuss virtually anything and everything even remotely associated with their businesses and organizations. In these conversations, GMs typically ask a lot of questions. In a half-hour conversation, some will ask literally hundreds.”

Persuade rather than coerce

Despite having the power of the presidency, Lincoln didn’t strong-arm people; he persuaded them. How did he do it?

“When the conduct of men is designed to be influenced, persuasion, kind, unassuming persuasion, should ever be adopted. It is an old and a true maxim, that a ‘drop of honey catches more flies than a gallon of gall.’ So with men, if you would win a man to your cause, first convince him that you are his sincere friend. Therein is a drop of honey that catches his heart, which, say what he will, is the great high road to his reason, and which, when once gained, you will find by little trouble in convincing his judgment of the justice of your cause, if indeed that cause really be a just one.”

And it shows in the way he handled subordinates. He didn’t give orders—he made requests. Look at his letters:

“Here’s the equation for getting what you want. Cutting to the chase: You want to get more. You want more money, a better offer, a better deal; here are the components of what you need to do. First, they need to like you. That’s the first component. The things you do that make them like you less make it less likely that you are going to get what you want,” says From Robert Cialdini author of Influence. He goes on to say: “It’s no surprise that people prefer to say yes to a request to the degree that they know and like the requester. A simple way to make things happen in your direction is to uncover genuine similarities or parallels that exist between you and the person you want to influence, and then raise them to the surface. That increases rapport.”

Lincoln has a famous quote on the subject: “I destroy my enemies when I make them my friends.”

Lead by being lead

Lincoln always gave credit where credit was due and took responsibility when things went wrong.

Says Phillips, “Not only did this satisfy Lincoln’s need for honesty, integrity and human dignity; it also gave his subordinates the correct perception that they were, in many ways, doing the leading, not Lincoln. If nothing else, it made them feel good about their jobs. It also encouraged innovation and risk taking because they knew that if they failed, Lincoln would not blame them.”

By doing this he dodged what Harvard professor Gautam Mukunda says is the most common leadership mistake: hubris.

Lincoln had no problem saying he screwed up, like in this letter to General Ulysses S. Grant:

“I write this now as a grateful acknowledgement for the almost inestimable service you have done the country. I wish to say a word further. When you reached the vicinity of Vicksburg… I never had any faith, except a general hope that you knew better than I that the expedition could succeed… I feared it was a mistake. I now wish to make the personal acknowledgement that you were right, and I was wrong.”

He trusted the judgment of the people who were on the front lines. This is one of the hallmarks of good military leadership.

Looking at the research, what type of leadership works in the toughest situations?

Lincoln’s method: being democratic and listening.

From Via Bold Endeavors: Lessons from Polar and Space Exploration:

“During the early 1960s, the Navy Medical Neuropsychiatric Research Unit (now the Naval Health Research Center) conducted a series of studies concerning leadership at small Antarctic stations. In that research program, Nelson (1962) found that esteemed leaders tended to possess a relatively democratic leadership orientation and a leadership style characterized by greater participation in activities than traditional for a military organization. Further, the esteemed leaders developed individual relationships with each of their crew members and reportedly sought the opinions of individual crew members about issues directly concerning them.”

Leaders take note: research shows that not worrying about who gets the credit for an idea is key to influencing people.

And the greatest minds of history agree. As Lao Tzu said: “Fail to honor people, they fail to honor you. But of a good leader, who talks little, when his work is done, his aim fulfilled, they will all say ‘We did this ourselves.’”

Lots of lip service is paid to encouraging innovation these days. What did Lincoln know about innovating?

Well, he’s the only U.S. President to ever patent something.

“Years before assuming the presidency, Lincoln had shown his interest in innovation when, on March 10, 1849 (at age forty), he received a patent for a new method of making grounded boats more buoyant,” writes Phillips.

What does it take to increase creativity and innovation in an organization? As I’ve said before, it’s pretty straightforward: Reward people for trying new things and don’t punish them for failure.

“And even during his most difficult times, Lincoln continued to call on his subordinates to screen new advances, implement ideas, and win while learning. He realized that, as an executive leader, it was his chief responsibility to create the climate of risk-free entrepreneurship necessary to foster effective innovation,” says Phillips.

By all accounts, Lincoln was a great storyteller and he actively leveraged this skill to win people over.

Lincoln himself said it plainly: “They say I tell a great many stories. I reckon I do; but I have learned from long experience that plain people, take them as they run, are more easily influenced through the medium of a broad and humorous illustration than in any other way.”

Research from Stanford backs him up.

Facts and statistics are great but when people hear presentations what do they remember? The stories.

From Made to Stick: Why Some Ideas Survive and Others Die: “When students are asked to recall the speeches, 63 percent remember the stories. Only 5 percent remember any individual statistic.” If you’re a leader as Lincoln was, you need to know what studies show inspires team morale. And the answer is great stories: “Institutions that can communicate a compelling historical narrative often inspire a special kind of commitment among employees. It is this dedication that directly affects a company’s success and is critical to creating a strong corporate legacy,” said author Adam Galinsky, Morris and Alice Kaplan professor of ethics and decision in management.

As I’ve posted many times, storytelling can improve almost every area of your life. Why is storytelling so powerful? Stanford professor Jennifer Aaker has done research showing stories are key to our sense of meaning: “Some new studies suggest if we spend time thinking about stories in our lives, that might be a more effective way of figuring out what is meaningful versus not.”

There’s a lot to learn from Lincoln. And people didn’t just love Honest Abe because he was a wise leader; he also had a good sense of humor:

If I were two-faced, would I be wearing this one?