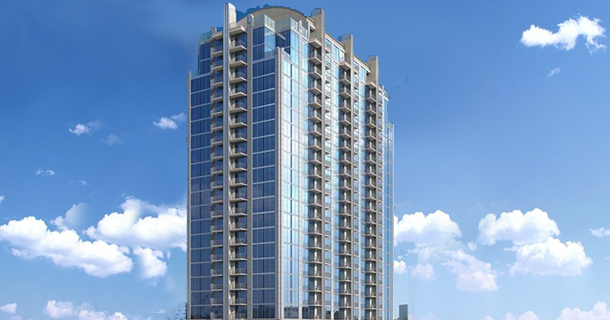 Residential construction—a pillar of the economy and employment—is starting to ramp up again overall, but in previous years the growth was driven by single-family homes. Last year, according to census data, construction was started on a little less than one million new residential units, and about one-in-three of those was a rental in a multifamily building, the highest share since data began in the mid-1970s.

Single-family homes accounted for about two-thirds of housing starts last year, down from their peak of 87 percent in 1993 and about 80 percent in the years leading up to the recession, the census data showed.

The move toward apartment construction reflects the convergence of several trends. Mortgage credit is still tight. Also, Americans have seen muted wage gains, and others have high student-debt loads forcing people who otherwise would have bought homes to rent instead.

At the same time, as the job market improves, larger numbers of young adults are leaving their parents’ homes and forming their own households—adding more to the demand for rentals. And the supply of new apartments hasn’t kept pace, especially in some key markets such as San Francisco.

“Builders are betting on more millennials leaving the nest this year,” said Jed Kolko, chief economist at Trulia, a real-estate site. “But young people don’t get a job one day and buy a home the next. The improving jobs picture for young adults will mean more renters this year, not a surge in first-time home buyers.”

That shorter-term growth in rental demand is combining with long-run demographic trends that are expected to continue to tilt U.S. home construction toward “multifamily” units, a category that includes everything from garden-style apartments to towering condominiums.

The baby boom generation is moving into retirement and empty-nesthood, prompting many to downsize to smaller quarters. The generations behind them, meantime, are having fewer children, later in life, so need less space.

Jordan Rappaport, an economist at the Federal Reserve Bank of Kansas City, projects that by the end of this decade, single-family-home construction will top out somewhere around its pre-housing-boom level of roughly 1.3 million new homes a year. Multifamily units, by contrast, are projected to increase to an annual rate of 550,000 new units a year, or roughly twice the rate of today.

The single most important factor behind housing demand is household formation, which is economist-speak for people leaving one household to form another—an adult child leaving mom and dad’s place, for instance, or when a house full of roommates breaks up into smaller groups.

Take Devon Stansbury, 24, who graduated from the University of Cincinnati in 2012. Stansbury has moved four times over the past few years, living with her parents and roommates before settling in her own one-bedroom apartment in Dallas’s Galleria district. Like many in her generation, Stansbury believes she will continue renting into her 30s.

“I see renting for five years at the very minimum, maybe even up to 10,” Stansbury said. “I am single, just focusing on my career. If something goes wrong here, maintenance will take care of it. And I feel safe.”

Many economists expect the U.S. this year to finally eclipse the 3 percent annual growth rate that has eluded its economy since 2005. Whether that happens or not will depend to a great degree on how much new housing is built.

The category of gross domestic product that includes home building and renovations accounted for about 3 percent of growth last year, below the 4-to-5 percent range that persisted before the housing boom and bust. And housing’s overall contribution to the economy is actually several times as large when knock-on effects—like commissions to real-estate agents or jobs at home-improvement stores—are taken into account.

Consumer spending also gets a bump: When home prices are rising and owners are building equity, they feel richer and tend to spend more.

The housing sector already is starting to make up that ground, but a larger-than-normal share of it is coming from rental apartments. Champion Real Estate, a Los Angeles-based developer, has nine projects in the pipeline totaling some 2,000 new units. That is about three times as many as normal, said Bob Champion, the company’s president. He expects the company to reach 15 employees this year, up from nine in 2012, and they are moving to new offices in June to accommodate them.

Moody’s Analytics estimates that four jobs are created for every new single-family-home start, versus two for multifamily units. That estimate includes the many indirect jobs created by new construction—renovations, furniture and the like. Multifamily units tend to be smaller so require fewer construction materials and labor along with smaller appliances and fewer furnishings.

Apartment growth is strong partly because single-family homes were built at the expense of apartments during the mid-2000s housing boom. On average, the U.S. built a little more than 250,000 new rental apartments each year from the mid-1990s to the mid-2000s. That pace fell by more than half in the worst years of the recession, and, despite two strong years of growth in 2012 and 2013, it is just now recovering.

And while job growth remains weaker than one would hope some five years after the end of the recession, analysts say the economy is producing more than enough jobs to fill the new supply. “We can still absorb the units that are coming online,” said Ryan Bennett, an analyst at research firm Zelman & Associates.

Of course, at least some of today’s new rentals apartments will ultimately become condominiums. Chris Foley, a principal at Polaris Pacific, a sales and marketing firm specializing in new condominium sales on the West Coast, said essentially all of his company’s clients build their multifamily buildings on a so-called condo map—a kind of legal document that makes it easier for developers to sell subdivided units one-by-one.

“Over time you’re going to see these units get converted from rental to condo,” he says.