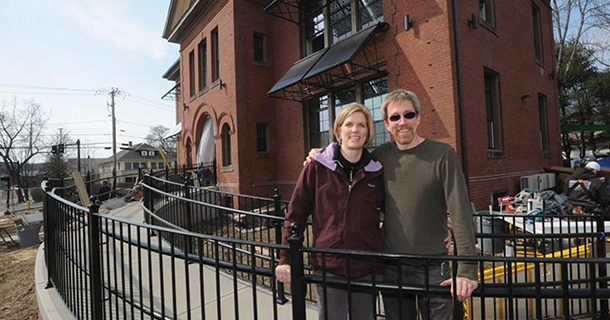 Finally realizing their dream, he and his wife, Barbara, stood inside one of those apartments in March watching that crew work on some of the final details of the more than $1 million renovation and prepared for an open house.

The couple smiled as they discussed their green apartment building.

The Zaccheos aren’t new to the business of taking old buildings and turning them into modern, net-zero, or near net-zero, apartment and office buildings, which produce the majority of energy they use. The couple currently owns several buildings that include a total of more than 100 apartments and office suites, many of which are green.

On Allen Street, an array of solar panels capable of generating 30 kilowatts of electricity cover a carport where residents will park at 51 Allen St., and those solar panels will supply the majority of electricity to the building to light, heat and provide air conditioning to every apartment, the Zaccheos said.

Hot water, which is also included in the rent, will be heated by solar evacuated tubes doubling as canopies outside of the southern windows.

Triple-pane windows will keep the apartments cool in the summer and warm in the winter and dual-flush toilets and high-end, low-flow modern bathroom and kitchen fixtures will help conserve water throughout the building. There is LED lighting inside and outside of the building.

Zaccheo built six dormers on the roof of the attic, which opened that space up for a couple of the larger apartments to have second floors. He also did work to the outside of the building, cleaning it up and building an accessible ramp to the front door.

Rents begin at $900 with everything but cable and Internet included. The couple said residents range from retirees and artists to executives and doctors to professors and website designers and come from everywhere including one resident from outside the country.

The stairwell, with its detailed woodwork and restored maple treads, as well as the original beams in many of the apartments, are some of the remnants of a long-closed elementary school.

“We wanted to keep the old stairwell,” said Mark Zaccheo. “We made a few changes, but it’s what it was in many ways.”

Kitchens include cherry cabinets and granite countertops, while bathrooms have basket-weave tile floors and subway tile showers. The ceilings are tall and five-panel doors were installed throughout the 12,000-sq.-ft. building.

The four-story building is composed of a dozen apartments, all of which are already rented. The Zaccheos said they signed the first lease a year ago, before anyone saw what the building or apartments were going to look like. By last September, they had four signed leases.

People are familiar with the local developer’s work, because he and his wife own several buildings in town, including the large apartment building behind the post office on Franklin Street.

The Zaccheos’ most recent renovation, before the Conway Street School, was the former Mix ‘n’ Match building on Olive Street, now known as Olive Loft Apartments.

They said their residents are encouraged, even within the lease, to conserve as much energy as possible.

They said work will continue on the property into the summer with landscaping and finishing touches.

The town had sold it to a contractor during a public auction the year before, but that developer decided to sell it to Zaccheo, rather than redevelop it.

The Zaccheos said they worked well with the town and suggested that other developers contact the town before they begin a project to make sure they know what will be expected of them.

“You have to do your homework,” said Barbara Zaccheo.

The Zaccheos said they are also happy that they could help boost the economy by adding jobs over the past two years.

The Zaccheos said their Olive Street apartment building has been open for three years and has been fully occupied the entire time.

“We’re proud to be part of the renaissance taking place in Greenfield, Mass.,” said Mark Zaccheo. “I’m glad we could take another old building and change it like this.”