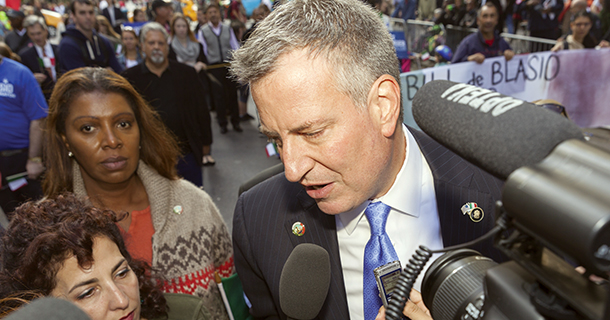 De Blasio unveiled his administration’s ambitious plan to build and preserve 200,000 units of affordable housing, one that he says will house half a million people at a cost of more than $41 billion over the next decade.

The mayor’s rhetoric in introducing his plan matched the scale of his proposal.

“This is literally the largest and most ambitious affordable housing program initiated by any city in this country in the history of the U.S.,” De Blasio said, brandishing his administration’s 116-page report while standing against the backdrop of a residential development site.

The plan is the mayor’s central effort to address the nature of inequality in New York, a theme that De Blasio rode to victory over a host of qualified rivals last fall. And while his housing goal has been known for at least a year—200,000 units of affordable housing over 10 years—the plan released is the public’s first peek at the details of how his administration will accomplish its titanic task.

The main thrust will be a policy of mandatory inclusionary zoning, which would require developers to include affordable units in new buildings in return for zoning changes to allow for taller buildings and greater density. The previous administration relied on a voluntary system to encourage affordable developments. De Blasio said those tactics had not produced as much below-market rate housing as needed.

In an acknowledgement of the lack of available space to build, the plan is weighted toward preserving, rather than building, affordable apartments. Over the next decade, De Blasio says his administration will preserve 120,000 units of affordable housing. Meanwhile, the city will work with the real estate industry to build 80,000 new affordable apartments.

More building will require denser neighborhoods, and the mayor has stated his willingness to build taller and more closely grouped buildings to achieve his goal.

The plan is expected to be a boon for the construction and building-worker industry, with the administration estimating 194,000 construction jobs and 7,100 permanent jobs being created as a result.

On the surface, the plan is diverse and multipronged. It includes specific prescriptions, such as the creation of two new city initiatives—the Neighborhood Construction Program and the New Infill Homeownership Opportunities Program—to aid in the development of small, vacant sites. And it includes broad goals that, for now, lack specifics, such as the revision of the city’s existing tax breaks for developers “to ensure that city resources—are no greater than absolutely necessary to incentivize the production of housing.”

De Blasio’s announcement was made at the site of a mixed-use development that employs the 50/30/20 model. David Picket, president of the developers of the site, Gotham Org., praised De Blasio’s plan, but noted that that model wouldn’t necessarily work for every project going forward.

De Blasio said his desire was to work collaboratively with the real estate industry, but promised to “drive a hard bargain” in future negotiations.

“We need to get the most out of everything we do,” he said.

The mayor did not identify specific neighborhoods that would be targeted for aggressive development, however City Planning Commissioner Carl Weisbrod said his group would initiate a “dozen” planning studies in the months ahead to start that process. His plan calls for additional building atop rail yards, such as Atlantic Yards in Brooklyn and Hudson Yards in Manhattan, but does not identify specific locations.

Public housing will be a component of this plan, though likely not the building of new public housing, as De Blasio noted that funding from the federal government was essentially “frozen.” Asked if new legislation will be required to help entice developers or protect rent regulated apartments, De Blasio responded vaguely that his administration expected the full cooperation from both the federal and state governments.

“We insist on real involvement,” he said.

Homelessness prevention is also a goal of this plan, though De Blasio contested the notion that homeless families would be moved to the front of the line as new affordable apartments are created.

Under the administration of Michael Bloomberg, the City Planning Commission undertook 119 rezonings encompassing 11,000 blocks since 2002, or almost 50 percent of the city. But De Blasio said he was confident that more could be done using the city’s zoning powers. Weisbrod said that even some neighborhoods that had been rezoned under the previous administration would be studied to assess additional rezoning opportunities.