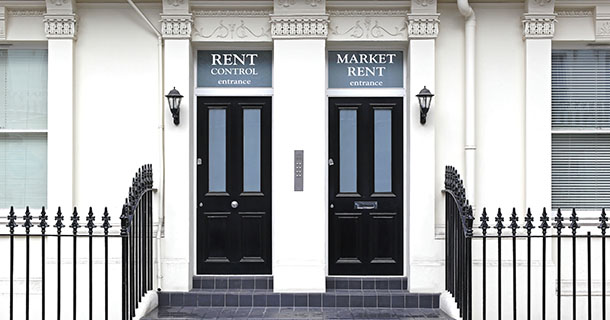 Reilly’s building, the Windermere West End, a luxury rental, is one of several in the city that prohibit rent-regulated tenants from using new services like gyms, playrooms and rooftop gardens. Some co-op and condo buildings have similar restrictions.

Developers say amenities are a marketing tool to lure high-paying tenants. And they say rent-regulation rules make offering them to such tenants problematical.

But advocates for tenants view the policies as ways to demoralize people who pay less than the going rate and to not-too-subtly encourage them to move elsewhere. Although there is no data on how widespread the practice is, both sides agree that it is on the rise.

Now, lawmakers are pushing for legislation to curb the practice.

“We were the only ones with a kid who was age-appropriate and that was just mean,” said Reilly, a personal trainer and actor who pays $1,250 a month for the studio apartment he shares with his wife and son. “But I’ve got stuff to do and a life to live, so I just laughed.”

New York City’s disparities in wealth have long played out in the city’s housing. It’s not uncommon for a luxury tower to rise within throwing distance of a low-income development. Mayor Bill de Blasio was elected on a platform that derided income inequality and the dwindling availability of affordable housing. His “tale of two cities” theme appears to also exist within buildings.

In recent years, developers who have earned tax credits by promising to provide affordable housing have built luxury condos with separate entrances and lobbies for the affordable rental units. The so-called “poor door” makes it easier to restrict who gets access to amenities. Last summer, 40 Riverside Boulevard, a luxury condo rising on the Upper West Side, drew criticism for a design in which low-income tenants enter through a separate door and do not share amenities with owners.

“The city has just begun to wake up and see that if we don’t act, this is going to be an increasing problem,” said Mark Levine, a member of the New York City Council who represents part of the Upper West Side. He is drafting legislation with Corey Johnson, another West Side council member, to expand the city’s anti-discrimination code to include rent-regulated tenants.

Last February, tenants gathered in the community room of Stonehenge Village, an Upper West Side rental complex, to hear about its new gym. Management explained that only market-rate tenants—fewer than 40 percent of the residents—would have access, said Jean Green Dorsey, the president of the tenant association.

“I had a room full of people going crazy,” said Dorsey, who has lived in the building since 1972 in a rent-stabilized unit. “I had to regain control of the room and give people time to blow off some steam.”

Dorsey pays $1,107 a month for a two-bedroom with a terrace and views of Harlem. Her front door is decorated with placards supporting President Obama and her living room is crammed with books and photographs. Dorsey, who is African-American and retired, describes herself as an activist. Soon after that February meeting, she called a press conference to deride Stonehenge’s decision.

Sitting at her dining-room table recently, a sketch of Malcolm X hanging behind her, she said, “Nobody makes me a second-class citizen in my own home. I had thought that by the time I got to be classified as fragile elderly that I would not have to fight this fight.”

At 230 Riverside Drive, a condo conversion on the Upper West Side, rent-regulated tenants cannot use the building’s gym and have limited access to storage areas. “It’s ridiculous to have a gym here that I can’t use,” said Sarah Denby, who lives in a rent-controlled one-bedroom with her husband, Walter Brotman, a building resident for 60 years. “At one point I got so mad: I can store the bike in the bike room but I can’t have a key. I have to return it right away or the doormen freak out. They absolutely flip out. They just besiege me.”

Rent-regulated tenants also earn less. In 2011, the median annual income of a rent-regulated tenant in Manhattan was $51,010 as opposed to $103,680 for a market-rate tenant, according to the Furman Center. So, in a diverse building, the restrictions could create a gym that is largely available only to the younger, wealthier white tenants.

“It’s a subtle form of harassment. It sends a message: You’re not as good as my tenants who pay more,” said New York State Assemblywoman Linda Rosenthal, who introduced legislation requiring landlords to offer amenities to rent-regulated tenants.

“There’s a slippery slope here,” said Mark L. Joseph, a professor at Case Western Reserve University who has studied class tensions in mixed-income developments in Chicago. “What if the next amenity to be created and kept exclusive is a snack bar, or a reading room, or a technology center?”

Developers point to rules governing rent-regulated leases as a reason for restrictions. If a developer offers a gym to a rent-regulated tenant and removes it, the landlord has to get permission from the Division of Housing and Community Renewal, the state agency that oversees rent rules. Otherwise, tenants could be entitled to a rent reduction and reinstatement of the service.

Developers contend that they build amenities like gyms to lure new market-rate renters, not to please existing rent-regulated ones. Stonehenge Partners, the owner of Stonehenge Village, spent $5 million upgrading the building’s systems and common areas. In a statement, the developer said the new gym “is aimed specifically at new and prospective tenants who expect certain amenities and incentives that are commonly available to market-rate renters.”

For developers trying to maximize profits, the stakes are high. In 2011, the median rent for a rent-regulated apartment in Manhattan was $1,321 a month, compared with $2,696 for a market-rate apartment, according to the Furman Center. The payoff for a landlord if a tenant vacates a rent-regulated apartment can be huge, especially in buildings like the Windermere, where a two-bedroom was recently listed on Streeteasy for $7,177 a month.

“The sponsor doesn’t want the tenant to have access to additional luxury services,” said Mark Zborovsky, a broker who sells bundles of rent-regulated apartments to investors. “His goal is to get him out of the apartment.”

Taking the deal with the caveat

The high cost of construction means developers often rely on public financing and tax breaks to build new luxury housing, either as rentals or as condos. In exchange, as many as 20 percent of the apartments must be set aside as affordable housing. Despite the financial benefit, developers worry that well-heeled buyers might be turned off by low-income neighbors.

“You could have people who are unwilling to buy in a situation like that. Their attorney could say, ‘I don’t know what this could do to your property value,’” said David Von Spreckelsen, the president of Toll Brothers City Living, which built Northside Piers in Brooklyn, a luxury condo that placed low-income rentals in a separate building with no access to amenities. “The two populations don’t mix at all. It really feels separate,” he added.

The policy was so successful that the company considered a similar plan at a development near the Gowanus Canal in Brooklyn. Although Toll Brothers ultimately backed away from that deal, Von Spreckelsen said he would consider the arrangement for future projects.

Even withering criticism has not deterred Extell, the developer of 40 Riverside Boulevard. The current design still includes a separate entrance for the affordable units.

Bruce E. Bernstein, a unit owner at 230 Riverside Drive, was dismayed when, last November, the condo’s board concurred with the sponsor’s policy that prohibited rent-regulated tenants from using the gym. Board minutes show that members were concerned about limited gym space and the potential for tenant law suits. The Olnick Organization, the owner of the rent-regulated units, declined comment, and board members did not respond to email requests for comment.

“It’s insulting. It’s ridiculous,” said Bernstein, 59, who was a rent-stabilized tenant in the building before he bought his one-bedroom in 2007. “If it’s some special thing, then charge a fee. But don’t damn them.”