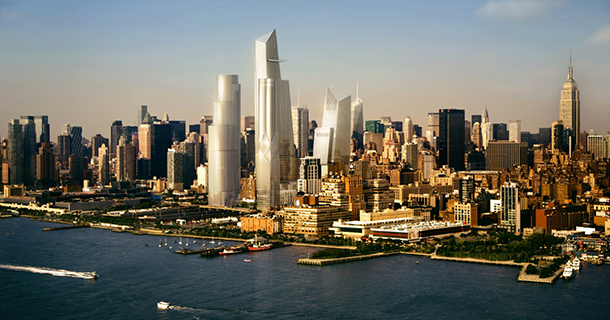 Employers, and by extension, cities seeking growth and tax dollars, are competing more fiercely than ever to become centers of innovation and attract top talent. In New York City, that thinking applies to the city within a city that will rise above wide-open expanse of rail yards on Manhattan’s West Side.

According to its developers, you’d have to go back to the construction of Rockefeller Center to find a development project in New York City that’s bigger than the Hudson Yards, the massive 17-million sq. ft., 28-acre site where began construction last year. With condos, apartments, and offices, plus a school, park, hotel, shopping center, and cultural event space, the $20 billion project will attract an estimated 68,000 visitors a day at its expected full completion in 2024.

The challenge of attracting top office tenants shaped design and planning of the project, with the mix of uses aimed at appealing to a new generation of workers, says Jay Cross, president of Related Hudson Yards, the private real estate developer leading the project. By 2015, when the first building, 10 Hudson Yards, is finished, millennials will already comprise half of the workforce, he says. By the time the last building is done, this younger generation of workers will be approaching 75 percent.

“It’s much more than a real estate project and we actually have to step back and not think of it in those terms,” he says. For “the corporations who are going to relocate their headquarters here we find a never-ending theme: How do I get the best talent in New York and how do I keep that talent? Engaging that talent and giving companies a competitive advantage, I think, is a big part of what we’re trying to do, physically.”

And so Related studied and sought to court the millennial demographic by creating a place where it’s possible, in theory, for a person to satisfy their every need. It’s a concept that seems strange in New York City, where accessible public transit and limitless options for eating and entertainment usually mean there is no real need to live on top of the office.

“They want a lot of work-life integration-far more than goes on in my generation-and they want to work for innovative companies,” Cross says, of the younger generation. “If we create an environment in which innovative companies want to come and congregate, we’re going to create the same environment in which people want to live, shop, and work. So that’s driven a lot of our decisions, especially related to technology.”

Hudson Yards will have its own looped fiber network, with one gigabit free Wi-Fi in public spaces and a distributed antenna system that will make sure everyone will get a strong mobile phone signal, regardless of their carrier. All of its utilities, including Hudson Yards’ own onsite electric microgrid, 13.2 megawatt natural gas co-generation plant and four diesel generators, will be located 40 feet above sea level, meaning that the complex will be a “place of refuge,” as Cross says, during future Hurricane Sandy-like disasters.

Related is also working with NYU’s Center for Urban Science and Progress to create an entire “quantified” neighborhood filled with data-collecting sensors-on building equipment, appliances, and on a voluntary basis, and on people’s smartphones. They will be working with one future office tenant, SAP, and other partners to form a laboratory that will build useful applications with this data, which could measure everything from shopping habits to energy use.

So far, major tenants include beauty and fashion companies Coach and L’Oreal, and the technology company SAP, which will all occupy the LEED Gold building at 10 Hudson Yards. Their floors will be sprawling and open, free from columns, and have floor-to-ceiling windows that look out to the Hudson River and connect into the newly extended High Line park. Another building, 30 Hudson Yards, will house Time Warner (along with its Turner Broadcasting, HBO, and Warner Brothers divisions) along with the tallest outdoor observation deck in the city at the top and a direct connection to a new subway station, an extension of the existing No. 7 subway line. A third building will house offices designed on a smaller plan, intended for the more traditionally-minded legal and financial companies that historically have anchored Manhattan’s economy.

The mix echoes the growth of the larger neighborhood on the West Side of Manhattan, a 400,000-person population area bound by Columbus Circle and Tribeca to the north and south, and 8th Avenue and the Hudson River to the east and west. According to Cross, people who are moving to this growth area include single, educated people with high household incomes and from a more diverse range of industries than is typical of New York (around 20 percent are in tech, 35 percent in creative industries, and only 15 percent are in finance or law).

This all bodes well for a completely new, young, and vibrant community. But there’s also a certain planned sterility about it all that reflects a city that’s becoming a harder place to live for the young people who don’t work at companies like SAP or Time Warner.