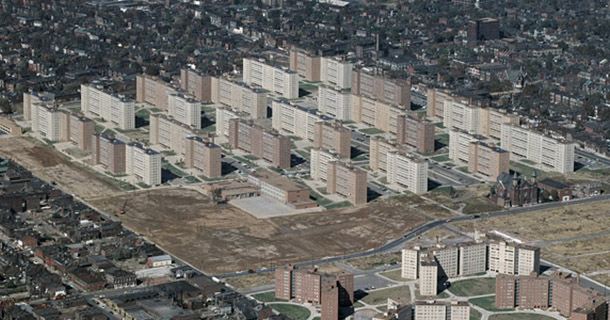 When you leave a place, you are unwittingly marked with its memories. Such memories become framed in your perspective and there they remain, inherently guiding you, until something such as a Ferguson-Missouri-Google-alert releases them like a jack-in-the-box hitting the trigger note.

When I was a child, my family lived in a late 1800s railcar flat in St. Louis. My grandparents, who owned our building and others in and around the area, lived across the street. A railcar flat, as we knew it, was a straight-line apartment made of loosely partitioned rooms. To get from the kitchen to the living room, you likely had to walk through a bedroom. Today we might call it a studio.

Nearly our entire extended family lived on or around 22nd Street and attended Holy Trinity Catholic Church a few blocks away. My grandmother and her sisters rose up through St. Vincent’s Catholic orphanage to the west, and the business she and my grandfather started after WWII was on the other side in the now-famous, Ferguson. Even then, the neighborhood was hundreds of years old and my family’s connection to the town wove through its history.

In those early days and a few blocks to the south, my beloved 22nd Street dissolved into Puitt Igoe, the city’s well publicized, albeit failed attempt at public housing in the 1950s and 60s. It is also a life lesson I’ve carried since. To know history is, at least, a small attempt at not repeating its errors.

“Pruitt-Igoe has lived on symbolically as an icon of failure. Liberals perceive it as exemplifying the government’s appalling treatment of the poor,” writes Alexander von Hoffman for the Joint Center for Housing Studies at Harvard University.

For a brief moment, it was thought to be a breakthrough in community empowerment and renewal. The city had been dotted with slums mostly inhabited by poor blacks. These tenements housed over 85,000 families and 33,000 of them were without as much as indoor plumbing. These same slums were also taking up space in an area the city had targeted for gentrification. St. Louis’ population was dwindling by the day and things seemed quite hopeless for its downtown. In those days, there was truly trouble in River City: We were losing population in droves so our city’s planning commission devised a strategy to bring people back. It was during this time that the landmark Gateway Arch was also in planning and construction.

The first buildings of the 33-tower Pruitt Igoe were released in 1955. Some were designated for black occupants, while those on the other side of the property were designated for whites. A year later the community was legislatively segregated, but whites had already refused to move in making Pruitt Igoe an entirely black community. Prior to the property’s construction, the area was poor, but a mix of whites and blacks.

The 57-acre Puitt Igoe was blocks from the Mississippi to the east and 20 minutes south of the subdivision of Ferguson. The 11-story buildings cost $36 million, 60% above the national average for public housing at the time. Its construction was tormented by budget-busting Federal regulations, inflated unionized labor wages and vast overruns. Still, the community was heralded an icon in solving the city’s housing problem… at least for a moment. Heavily propped up by Federal funds and spearheaded by Democratic Mayor Joseph Darst, Pruitt Igoe’s siren called the impoverished to abandon their slums and shanties, and inhabit the brand new towers. Pruitt Igoe was to be a brief story of unintended consequences.

The project was designed by Yamasaki, a young and inexperienced architect later known for his work on the first terminal at Lambert Air Field and then the World Trade Towers. Long before micro-apartments were in vogue, Pruitt Igoe’s dwindling budget created a fiscal fork in the road: civic leaders made the unforgiving error of choosing high density over fewer units. Higher density meant small units, undersized kitchen appliances, narrow hallways and no air conditioning in a town known for its thick humidity and scorching summers. Mayor Darst led the charge to ratchet up the density and shrinking the units.

The 2,870 apartments made up the largest public housing community in the country at the time.

Not long after its first residents moved in, Pruitt Igoe began to disintegrate under the weight of poor upkeep and devolved into unimaginable gang violence, murders, and mayhem. Police would not enter the property and left calls for help unaided. Those who were able, fled to the outer margins of the city and its furthest suburbs, i.e. white flight.

By 1968, HUD (Department of Urban Housing) encouraged the remaining residents to leave Pruitt Igoe. By 1972 the icon of public housing was completely razed and lessons learned swept away into the history books.

Pruitt Igoe is one chapter in a tale that is deeply rooted. It might even add historical precedent to the Ferguson officer doing a job most of us wouldn’t want, and one misguided kid who was in the wrong place at the wrong time.

Before moving to California and just after college, I moved back to Ferguson (St. Louis) for a final year before leaving my hometown for good. It was a rough neighborhood even then for the likes of a young person… but it’s what I could afford just out of college.

The week after I moved from my one-bedroom apartment in Ferguson, Missouri, for an opportunity in California, my neighbor / friend was entertaining in what had been the apartment next door to mine. There was a knock at the door. When her boyfriend answered, he was shot in the face.

It really didn’t make news because he was black as was the guy who took his life. Everyone said it was drug-related but I don’t know. I only knew I was now 3,000 miles away in California and that Ferguson, Missouri, was now very far away.