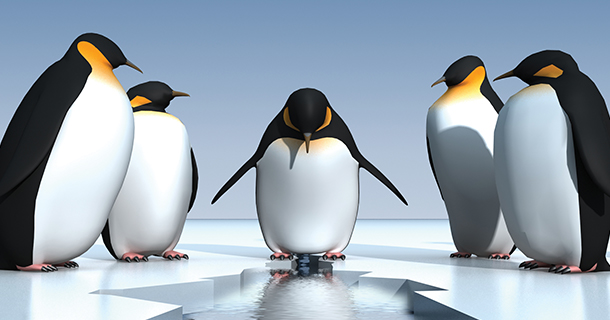 The research paper, “The Role of Contagion in the Last American Housing Cycle,” written by Wharton real estate professors Joseph Gyourko and Fernando Ferreira, and doctoral students Anthony DeFusco and Wenjie Ding, examines the boom, which crested in the middle of the last decade. It was followed by a woeful tumble that caused many homeowners to owe more on their mortgages than their homes were worth. The authors use that sinister sounding word, “contagion,” to describe the phenomenon of a housing boom spreading from one area to a neighboring area.

They illustrate the phenomenon in a series of maps that show the housing boom spreading, year after year, from region to neighboring region. It started in 1997 in California and the area connecting New York and Boston, slowly spreading along either coast, and into Arizona, Nevada and Florida.

The researchers crunched the numbers and found that as one metropolitan statistical area, or MSA, experienced a boom, its neighboring MSA often also saw a bump in activity, and remained higher for several years.

Contagion “played a statistically and economically significant role in the development of the most recent housing boom.”

The why behind a boom

Identifying the boom, and its spread, was the relatively straightforward part. The harder task was establishing why.

Typically, housing prices in any given market tend to move at a constant rate, except when there is “a shock to local productivity, amenities, or expectations,” the researchers write. They dubbed a “fundamental factor”—a “positive industry or income shock”—as an economic reason that causes a housing boom.

The researchers put to the test whether such fundamentals were at work when the most recent housing boom spread from one metro area to a neighboring one. DataQuick, a private data vendor that collects housing transactions from county recorder’s offices in markets across the nation, processed the data.

In measuring the fundamentals, the researchers examined such factors as average income of mortgage applicants, unemployment rates, population migration flows, speculative activity, percentage of minority buyers, average square footage of each housing unit, and credit market conditions. If what was driving the contagion, they write, was a spillover in higher income from one MSA to a neighboring MSA, “then we should see it changing along the timeline of the neighbor’s boom.”

For instance, if there is such an “income shock” in the San Jose-Sunnyvale-Santa Clara, Calif., MSA, house prices in this scenario would increase, given the constraints on the supply of housing stock, causing a housing boom.

That surge could spread to nearby MSAs, such as San Francisco-Oakland-Fremont, or the Central Valley of California as jobs migrate away to nearby areas. The fundamentals may take some time to catch up, but “house prices in the neighboring markets should immediately capitalize on the expectation of future economic growth,” they write.

But this was all theoretical; the researchers could find no statistical, real-world connection to explain the impact of one metropolitan area on another above and beyond common trends in both places. The researchers theorized that there was “some type of irrational exuberance or otherwise mistaken perceptions of the influence of a neighboring market.” Or, as Gyourko says, they can’t prove it, but “it looks to us as if contagion is not driven solely by purely rational market factors.”

Residents in neighboring markets may be correct in thinking that higher incomes in Silicon Valley will spill over into their own markets, for example, but they may incorrectly predict its magnitude.

“For individuals, one just needs to be aware that what is going on at the aggregate market level might be driven at least partially by some type of psychologically based contagion that need not have a lot to do with pure market fundamentals,” Gyourko states.

It was notable that the housing boom did not initially leapfrog into faraway places in the country—instead spreading from one neighboring locale to another until it eventually covered a huge swath of the U.S.— despite a world that feels smaller with Internet-based news and social media.

“My gut is that proximity matters,” Gyourko says. “It influences how you frame an issue. If prices are rising in a nearby area, you are more likely to presume that they should be rising in your market, too. You just are much less likely to jump to that conclusion if the booming market is seven states and a couple of thousand miles away.”

Although the housing boom was contagious, the housing bust followed a different phenomenon, the researchers point out. The beginning of the bust, they note, was more national in scope than was the start of the boom, and was much harder to track MSA to MSA.

Policymakers should reevaluate their past practice of refraining from intervening, they write, because regulatory action could limit booms in size and scope. Current Fed policy, Gyourko notes, “is not to try to prick bubbles.” But if they believe a boom is building based on emotion, rather than economic fundamentals, “that could change the calculus about whether it is appropriate to intervene,” he adds.

The factors that led to the boom are not well understood, which helped inspire this research, Gyourko says. “The passage of time provides more data and a broader perspective from which to examine this issue,” Gyourko notes. “That’s our belief, anyway.”