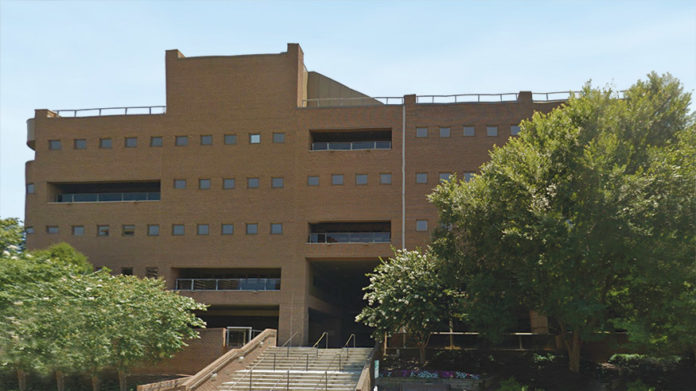 At a time when the nation was facing a severe energy crisis, this 323,000 sq. ft. structure was a beacon of light illuminating the future. Using an air-type collector system, it had a total heating and cooling budget of only $210,000-per-year, less than $1.54 per sq. ft.

That budget covered heating, air-conditioning, hot and cold water, as well as the power used by the approximately 400 people working there daily. The owners did get a special rate because the building was solar.

Not only was the air to water system very efficient it was also very low maintenance, according to the building’s chief engineer at the time, Dennis Miller. The secret to the system’s success was the tubular design of the collectors on the roof. “No matter what the position of the sun the tubes were always working,” he explained.

Flat plate collectors do their best at collecting solar energy while the sun is shining directly on them, but the tubular design was able to collect useful energy from dawn to dusk. This was particularly significant on bad weather days and during the winter months when flat-plate design panels would drop productivity.

Each tube acted much like a thermos bottle. Air was drawn into the vacuum tube and subsequently forced out by a fan. The center of each tube was metal encased in a black shield to absorb the heat.

The outer casing was clear glass. Air from the solar rooftop panels was drawn across coils which heated the water which then circulated through the entire heating system.

The original building contained a total of 5,810 solar tubes totaling 23,904 cu. ft. They were so well constructed that only about three tubes per year needed replacing. The primary source of damage to the tubes, according to Miller, was “the seagulls and the kids.” The blows from the seagulls were due to their droppings from above and kids did their share by throwing rocks from below.

But, the sun was not the only generation source. The other was water. There were 47,340 gallons of water stored in six 7,890 gallon tanks below the second garage level. The time for the water to make one complete cycle through the tanks varied from one hour and 30 minutes for cold water to two hours and 30 minutes for hot water.

Air from the solar panels was drawn across the water coils causing the water to heat. The purpose of the hot water was to cause evaporation in a lithium bromide solution, which acted as a refrigerant.

As this solution cooled it flowed across a bank of chilled water tubes. This resulted in a three to five degree drop in the water temperature. The chilled water was then introduced directly into the absorption chiller. All this resulted in lower demand for electrical current.

During summer months the system was able to harvest 741,000 BTU’s (British Thermal Units)-per-hour for an 80 percent efficiency rating. During winter months solar power supplied approximately 45 percent of the heating load by supplying hot water to the return side of the electric hot water boiler.

Solar power also supplied 75 to 80 percent of the individual demand for hot water throughout the building. The system maintained a constant 135 degree temperature for individual use of hot water.

Known as a thermal storage system, it combined solar power with regular electric power. Dominion Virginia Power noted that the bills for the building were averaging 4.95-cents-per-kilowatt hour compared to the normal fuel/electrical rate of 6.11-cents-per-killowatt hour.

Unfortunately all of that is now history with the reconstruction of the building. Its heating and cooling system is conventional.

It will also no longer be a commercial structure but rather house approximately 60 residential condominiums ranging in price from $1.4 million to $4 million. And, tenants will be paying the utility bills.

The rooftop solar panels are gone, as are the large water storage tanks below the surface and the elaborate circulation system.

The rooftop solar panels are gone, as are the large water storage tanks below the surface and the elaborate circulation system. History marches on. But, not necessarily forward. Alexandria has lost its claim to fame in the solar heating and cooling universe.