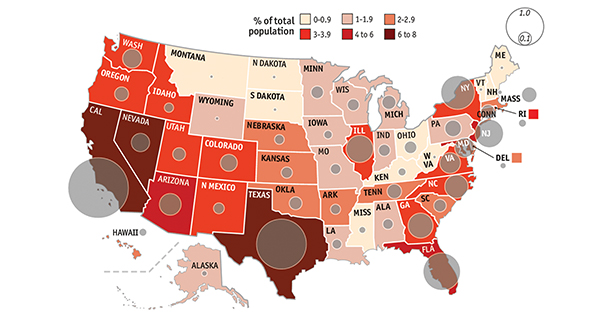 According to the Migration Policy Institute, 3.7 million unauthorized immigrations that are parents of U.S. citizens or legal permanent residents could receive temporary relief from deportation as well as work authorization. Additionally, expansions to the Deferred Action for Childhood Arrivals (DACA) program could provide relief for nearly 1.5 million immigrants. The age cutoff of 31 under the current DACA program would be eliminated, and residency requirements would be expanded from 2007 to 2010.

The president’s plan would also expand immigration options for foreign entrepreneurs who have raised capital from U.S. investors, as well as provide work authorization to spouses of individuals who have received H-1B high-skilled work visas.

A report from the White House’s Council of Economic Advisors estimates that by 2024, the executive actions could increase GDP by 0.4 percent and cut federal deficits by $25 billion. But other experts say the temporary nature of the reforms—and the need for Congressional action for more comprehensive changes—makes the economic effect of the president’s actions far from uncertain.

“Meaningful and lasting immigration reform can only be achieved through the enactment of bipartisan legislation,” U.S. Chamber of Commerce President and CEO Thomas J. Donohue said in a statement following President Obama’s speech. “Executive actions cannot adequately fix our broken immigration system, and they raise important legal and constitutional questions.”

Former Small Business Administration Head Hector Barreto echoed these sentiments, and questioned whether many of the immigrants who could seek relief would even choose to do so given the current landscape.

“Unauthorized immigrants know this is temporary, so it will take months for this to actually kick in. It’s temporary—it can change—this is not legislation,” Barreto said.

The effect on U.S. workers

The CEA report says President Obama’s actions would have no impact on employment for U.S.-born workers and would raise average wages for these workers by 0.3 percent in 2024.

Federation for American Immigration Reform (FAIR) President Dan Stein, however, said the math doesn’t add up for him.

“It is hard to imagine a chief executive who wants to create incentives to pull long-term unemployed workers into the workforce to justify what he did,” Stein said. “Giving 5 million work documents for people who may or may not be working, but will be seeking higher wages for their work as a result, will create labor displacement in the end.”

Stein said increasing the labor supply and increasing competition would make it easier for employers to hold down wages, thereby hurting American workers.

At the liberal-leaning Economic Policy Institute, Director of Immigration Law and Policy Research Daniel Costa argued that the plan would actually be good for low-wage U.S. workers and small businesses.

“Businesses should like it. Those who are paying minimum wage won’t have to compete with those paying less than minimum wage, or who are not paying overtime to unauthorized workers,” Costa said.

“It means that it can be harder for employers to pay immigrants lower wages and take advantage. It’s good for them but also good for U.S. workers who are standing next to them,” he said.

In order to receive work authorization, unauthorized immigrants would have to pay their “fair share of taxes,” according to President Obama. But according to the Migration Policy Institute, it’s unlikely that all who are now eligible for amnesty from deportation will come forward.

“MPI has estimated that as of July 2014, 55 percent of those who met the DACA criteria had applied for relief. Application costs, fear of self-identifying as unauthorized or potentially exposing other unauthorized relatives to government scrutiny and lack of information about the program and its temporary nature were among the barriers,” wrote the think tank.

And as Bartiromo pointed out, some employed immigrants who are being paid under the table may not want to start paying taxes, even if it means amnesty.

These uncertainties make it difficult to evaluate the true fiscal impact of President Obama’s executive actions.

While Kallick said the plan “can only have positive impacts on the economy,” he said it is difficult to assess what temporary relief could mean in terms of tax collection and for the deficit.

“The Congressional Budget Office estimated there would be a $158 billion decrease in the deficit for comprehensive reform,” Kallick said. “If Congress would pass full reform, this is the level of impact we’d see. This is significantly less than that.”

However, Kallick gave a ballpark figure, estimating that on the state and local level, authorizing these immigrants would mean an additional $1 billion in taxes.

When it comes to assessing the impact on the federal deficit, it’s also necessary to address the question of benefits for the unauthorized immigrants who come forward.

In his speech, President Obama said the plan would not extend the benefits that citizens receive to these unauthorized immigrants who would be granted temporary relief. But Stein is skeptical that this will be the case.

“The reason the Gang of Eight bill was objected to was that it would skyrocket non-citizen’s ability for benefits,” he said, expressing concern that this would also be true in this case.

With many questions yet to be answered, the experts agreed on one point: Everyone is now looking to Congress.

“What we do know is that large economic impact from immigration requires Congressional action. Only Congress can add green cards and H-1Bs so high tech and advanced manufacturing and hospitals can get the workers they need. And only Congress can fix the temporary low-skilled guest worker program,” said Partnership for a New American Economy Chairman John Feinblatt.

“This step offers some relief, but it doesn’t change the fact that we live in an iPad and smartphone world, and we still have an immigration system that is stuck in the last century.”