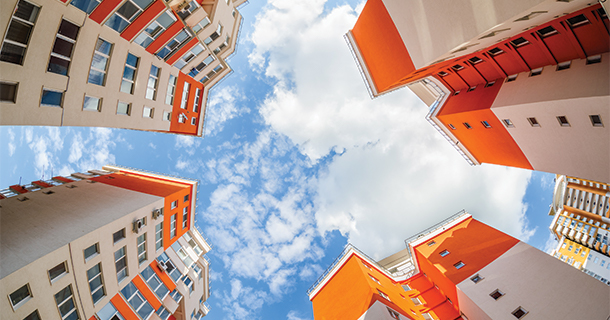 The multifamily sector, especially rental apartment buildings, has been playing a hot hand in 2014 as it demonstrated sustained underlying strength.

Even as new apartment construction levels hit the highest monthly construction pace since the beginning of 2006, the latest absorption rates for unsubsidized, unfurnished, newly built apartments have continued to keep pace.

Who wants to see those kinds of results stop? No one really. However, multifamily executives and brokers we contacted for this outlook realize this exuberance can’t continue at this pace forever. On the whole, they expected to see a continued strong multifamily but not at the same pace as the past couple of years:

Mark Franceski, director of research for apartment owner developer The Bozzuto Group in Washington, D.C., is seeing that dynamic across its Northeast markets.

“In the Northeast markets where we develop and manage multifamily properties, 2015 is a year of major uncertainty. While a few markets are performing fairly well (Baltimore, New York, Boston) others are experiencing softening rents and declining occupancy (Washington, Philadelphia),” Franceski said.

“Supply is of course a major concern in all of our markets because 2015 will bear roughly equivalent levels of new supply to the market as 2014. So far, no market has collapsed and lease-up projects have performed well, but my main concern is the “duplication” of product delivering next year,” Franceski added.

In addition, Franceski noted, apartment rents at the majority of new projects are at or near the top of their respective market, which has raised affordability concerns and may also limit rent growth in the medium term.

That said, “I still believe multifamily is the property type to be in because there is no major office recovery in the near future,” Franceski said. “We are at a difficult point in the cycle because apartment rent growth is maxed out for now, construction costs are extremely high, land sellers want irrational prices and supply concerns are not going away, but multifamily still provides an excellent source of income and long term value.”

The outlook for multifamily is mixed. Homeownership rates are down and recent wage rises are bright spots in terms of supporting demand. Yet at the same time many markets appear overbuilt.

Owners need to concentrate on re-positioning assets and focus on class B/B+ assets in order to perform well and maintain occupancy. Opportunities in Class A exist as well, depending on markets (SF, LA, Atlanta).

Interest in multi residential seems high judging by the amount of capital that is chasing opportunities; lots of investor interest. In theory, class B/B+ should do better given better demand/supply fundamentals. Still, Class A should not be overlooked, depending on the market according to Mitch Strohminger, analyst and principal at Intelligence de marché in Montréal.

The Chicago multifamily market appears to be healthy and thriving based on our demand and activity in apartment lending. While new construction appears to be confined to the downtown Chicago Loop market, mostly in Class A properties, other areas of the city and surrounding suburbs have little or no land available for new multifamily construction, thus demand for existing properties remains healthy. Some economically depressed areas of the city that were hard-hit by the past recession have even shown some signs of stabilization.

Class B and C properties continue to exhibit good demand with both cap rates decreasing and rentals increasing—not significant—but steady. Mortgage financing appears to be readily available and at attractive rates according to Douglas Maxeiner, chief appraiser at BankFinancial in Chicago.

We continue to be cautiously optimistic about what lies ahead. Steadfast Companies’ target markets continue to outperform in terms of job creation. As jobs are added in these areas, people are overwhelmingly looking at apartment homes as a long-term lifestyle choice. This includes the Millennials and increasingly the baby boomers.

The new apartments being built command higher rents than most Americans can afford. So the supply is limited, but demand for living space is increasing as the economy moves forward. This creates an additional opportunity to upgrade the interior of an existing apartment home-say a Class B-and deliver increased value to our residents in return for a bump in rents.

This approach will keep apartment stock physically attractive as demand increases and supply declines for most Americans’ wallets. It is a win-win scenario for owners and residents alike says Ella Shaw Neyland, president of Steadfast Apartment REIT, in Irvine, Calif.

San Diego is among the top markets in terms of percentage of Millennials. We have 96 percent occupancy and in hot submarkets renovations can produce rental increases in excess of 15 percent.

Over the last 30 years our market has averaged about 350 transactions annually of five and above. 2014 falls into that category. There are no obvious factors which seem likely to dramatically decrease that pace says Terry Moore, principal of ACI Apartments in San Diego, Calif.

While price per square foot and per unit are likely to top out, there is still plenty of demand stemming from the millennial generation’s inability or outright lack of desire to purchase a single-family home.

With the economy rebounding more people are looking to move out on their own. However unemployment, and more importantly, underemployment continue to be points of concern.

Garden-style and mid-rise property types in B markets will outpace other types due to them being slightly older and therefore allow investors the greatest ability to add value through unit renovations and modernization of common area features says William Shimerman, business development for Kitty Wallace Team of Colliers International in Los Angeles.

Putting the real into real estate

I’m very optimistic on the multifamily market nationwide. This market represents the “real” portion of the entire “real estate market” in the post-recession of 2008.

The market will continue to expand with strong momentum going into 2015, and beyond. Extensive demographic changes taking place in the U.S. such as population growth, new house formations and economic growth will add to demand for this class asset. Unless we experience some kind of steep “interest rate” increase, which I don’t see it coming for other microeconomic reasons, the multifamily will continue to reinforce its leading position among CRE.

Rents are going up and will continue to do so in 2015, alas, moderately. The November year-to-date (YTD) effective rent growth of 5 percent keeps 2014 as the apartment market’s strongest post-recession year and it will be hard to surpass it. All-in-all, rent growth will continue to grow faster than the rate of inflation predicts Sami Dinar, multifamily broker at Keller Williams in Beverly Hills, Calif.

Not much available in lower- and medium-rent spectrum

Fairfield County in Connecticut is seeing increased residential development with demand across each apartment sector with high demand in lower-middle end sector.

Locally in Norwalk, the Avalon apartments leased up fairly quickly at $2,500+ rents and there seems to be pent up demand for apartments targeting younger and trendy crowd. Merritt 7Apartments easily get north of $4,000/month.

On the other hand, there isn’t much available at the lower-medium rent spectrum ($1,500+/- per month will not get you much). Of course, $1,500 rents do not justify construction or remodel, so developers are targeting the higher rental markets leaving the lower-middle bucket open says Nate Swetland, associate broker with Pyramid Real Estate Group in Stamford, Conn.

It is all about jobs and large projects moving forward again here in Vegas. As long as we are booming again, as building plans for large projects would indicate, we should be back in motion in a large way. Initially, the job growth will occur on the construction front, but once those large projects are completed, they will employ a lot of permanent labor as well.

Class A and B will continue to see stability mostly from millennials that seem to prefer renting, and that the lower class buildings will also see major improvements once we produce those lower end construction jobs in short order.

Ultimately, a rising tide raises all ships and that is my continued prediction in 2015. Where else can you find so many multiple billion dollar projects coming out of the ground, or at least finishing what was started pre 2008 according to Devin Lee, CCIM, partner with the NAI Vegas | Sauter Multifamily Group.

The downsizing of the military has caused cuts that are real and temporarily permanent. The Washington D.C. economy will likely languish with defense contractors attempting to diversify into other non-defense related fields, a process that will take time.

So why does apartment building continue? The simple answer is inertia. Developers are scrambling to get their projects going before the market turns, and banks, now flush with cash and looking to lend, continue to make loans rather than to invest in low interest bonds.

Consequently a rush of new developments will continue to hit the market over the next two years that will substantially increase supply into a slackening demand. To avoid vacancies, owners of apartments will be forced to lower rentals reducing income and ultimately deterring investors from adding yet more supply into the pipeline according to John P. Kyle, SVP for Cresa in Washington, D.C.

Where are first-time homebuyers

First time buyers have been decreasing, putting more renters in the market which means a higher likelihood of return in investing in rental property. The latest census data on Woodland, Calif., agrees with this trend. Nearly half of Woodland is renter-occupied. Of these occupied units, 28 percent are 2+ unit structures. This shows that multifamily dwellings still play a significant role in housing, which could increase rental prices in 2015 with more people opting to rent instead of own.

There seems to be an upward trend in renters, which in theory will correlate with more occupation of multifamily housing. This should maintain or even increase occupancy levels barring any unforeseen changes in the market according to Dan Sokolow, senior planner for the City of Woodland in Calif.