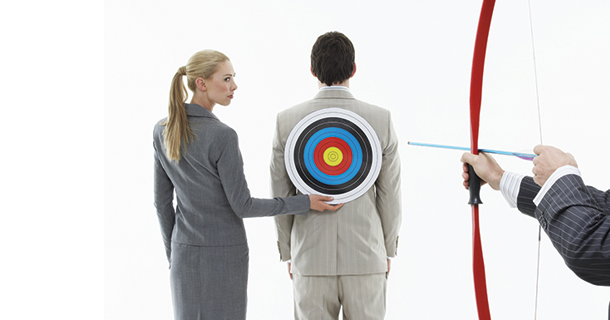 Or maybe you take a slightly less offensive view of office politics and see it as controlling agendas, building covert alliances, protecting access to key leaders, and holding “meetings before the meeting.” No matter what your take, it’s not surprising that honest people don’t want to get involved.

But are politics at work inherently dirty?

The truth is that just being a member of an organization is a political act. And in fact, we must influence people at work all the time. It’s how we get things done. And to influence, we must have power, the real currency in workplaces. Most people want it. All of us need it. In healthy organizations, we “get” power, or are granted power, by virtue of our ability to inspire and provide vision.

We also get power as a result of what we can do for people. In companies that value people and results, we are granted power because we help to create a vibrant climate and a resonant culture that is ripe with hope, enthusiasm, and a can-do spirit. In such companies power is used well—for the good of people and the enterprise.

Office politics is really just the art of influencing others so we can get stuff done at work. And, despite the bad rap that politics gets, successfully engaging in politics requires the development and use of good qualities. For example, Gerald Biberman’s research found that those who engage in office politics are more likely to have an internal locus of control—they believe they can influence people and outcomes, which motivates them to get into the mix and try to get things done through others.

At best, such confidence is grounded in self-awareness, self-management, and a desire to move people for the good of all. The combination of emotional intelligence and, what the late great David McClelland, called socialized power, can result in influence strategies that make people enjoy working together toward common goals.

Linda Hill and Kent Lineback, authors of Being the Boss argue that leaders should stop avoiding office politics. They note that people who actively steer clear of politics don’t do what the best leaders always do— build strong, positive relationships that serve a purpose beyond simple friendship (although that’s nice, too). My co-authors and I call these relationships “resonant.”

Resonant relationships are bonds we build as a result of truly seeing people and valuing them for who they are. These powerful relationships are grounded in empathy as well as authenticity and mutual respect. In such relationships, we come to know what drives people and what they value, and can hence inspire, motivate, and influence in a way that makes them feel valued. People who avoid office politics miss out on all of this, as well as on receiving help, benefiting from mutual support, and even having fun. Rob Ashgar, writing for Forbes, takes it step further, arguing that office politics is the art of getting along with others and of putting yourself in positions where your work will be noticed. That’s not bad. That’s simply a smart thing to do.

Politics, then, can be okay to engage in. Unless, of course, your organization is toxic (which too many are).

If the politicos in your organization are Machiavellian types you’ll notice lots of lying for personal gain, self-aggrandizement, clever flattery, and people taking delight in crushing weaker team members and enemies. Research suggests that Machiavellian individuals tend to have lower emotional intelligence—particularly when it comes to empathy and recognizing emotions.

These people—and there are a lot of them, to be sure—are destructive, self-centered horrors to work with. How can you protect yourself from these people? To start, engage your social awareness skills and ferret them out. Don’t be fooled by their flattery. Then, you’ve got to have clever strategies for avoiding them or beating them at their own game, without becoming manipulative yourself.

We can’t avoid politics and we should not, because if all of the good people stay out of the game, the Machiavellians and the narcissists win. Worst of all, if you choose to opt out, you may be putting your relationships—and your ability to influence others —at risk.

So, get in the game. Be authentic, and claim your right to guide and inspire others. Broaden your group of friends at work. Learn what it takes in your organization to influence individuals and groups. Do something for somebody else, every day, without thought of personal gain. Treat politics like the game it is, with all the seriousness and ethics it deserves.

Author: Annie McKee is a senior fellow at the University of Pennsylvania, director of the PennCLO Executive Doctoral Program and the founder of the Teleos Leadership Institute. She is the author of Primal Leadership with Daniel Goleman and Richard Boyatzis as well as Resonant Leadership and Becoming a Resonant Leader.