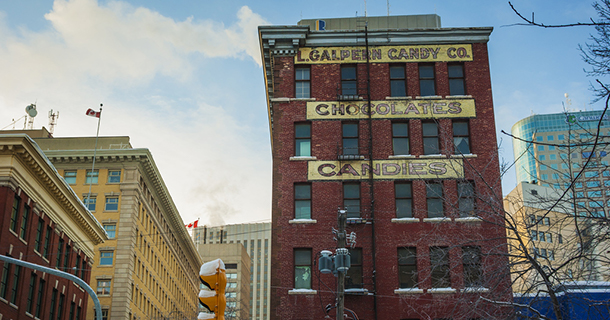 Alston Properties has already gutted the 109-year-old Galpern Building in Winnipeg, Canada, and is poised to begin converting the six-story heritage building into 30 one-bedroom rental apartments and four two-bedroom townhouses.

“Within a month, we hope to be full steam ahead on construction,” Bryce Alston said. The hope is to have the building ready for occupancy early next year.

The head of the city’s downtown development agency, CentreVenture Development Corp., said it’s good to see someone finally redeveloping the Galpern Building. “We are very excited about the prospects of this project—34 rental units in a grand heritage building that has been vacant for so many years,” Angela Mathieson said.

“This is the first rental residential project on the east side of Main Street in the heritage district, providing another choice for people looking to live downtown,” she added.

Alston, who moved to Winnipeg last year to manage the project, said their family-owned firm believes it can succeed where other developers have failed because it’s also the general contractor for the project. The cost savings from that, coupled with the tax relief it hopes to obtain under the new city-provincial Live Downtown—Residential Development Grant Program, will make it financially feasible, he added.

The program aims to stimulate the development of 750 to 900 new apartments downtown by offering property owners a rebate on property taxes.

The program will be managed by CentreVenture and Loretta Martin, the agency’s director of development.

It’s not a stretch for Alston Properties to be handling the general contracting duties for the project, because that’s what the 34-year-old company is—a general contractor. It’s only in recent years it has branched out into real estate development, with a focus on redeveloping downtown heritage buildings.

“We love doing these projects,” Alston said. “They’re tough and they’re dirty, but at the end of the day you have a building right downtown that can’t be replaced, really.”

The 24-year-old said the company, which is headed up by his father, Michael, likes Winnipeg’s Exchange District because of the abundance of older warehouses that have the potential to be redeveloped.

Buildings here are also more affordable than in downtown Victoria, Vancouver or Calgary—the three other cities where it has worked on these types of projects.

The conversion of the Galpern Building, which is also referred to as the Porter Building, is the first of several redevelopment projects the company hopes to tackle in downtown Winnipeg. “We’re actively looking at other buildings right now. We’re looking at all sorts of stuff. We’re not even opposed to doing a new building, as well,” Alston said.

An ambitious plan by a group of local developers to build a 24-story apartment/retail tower on top of the existing building failed to get off the ground.

“They decided not to proceed with it,” Martin said, but declined to say why.

Alston said it’s an intriguing property, “but there are so many different parameters you have to work with there. It’s not cut and dry. And that’s what gets scary—the unknowns of it.”

Their plan for the Galpern/Porter building involves converting the top five floors into 30 apartment-style units. They will all be one-bedroom units, roughly 500 sq. ft. in size. They’ll have an open-concept design, with exposed brick on the exterior wall and exposed wooden joists and beams. Monthly rent will start at $1,000.

The main floor and basement area on the Rory Street side of the building will be converted into four two-story townhouse units. Each will have its own entrance and will be 1,100 to 1,200 square feet in size. The rent will be $1,650 per month.

To accommodate the new apartments, Alston Properties will be adding a total of 50 new windows on the top five floors on the Rory Street side of the building. For the townhouse units, it will add two more big windows on the main floor to complement the two existing ones, as well as new doorways for each townhouse.