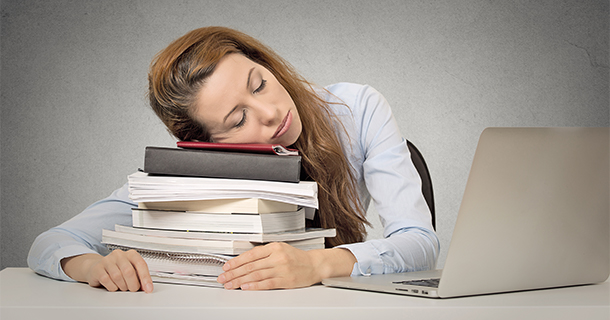 Globalization, flex hours and the work-at-home smartphone ever aglow are robbing many workers of sleep, and the consequences go beyond coming into the office with dark circles under the eyes. Several recent studies find that productivity, creativity and workplace morale are all taking a hit as a quickening capitalist society and the human need for getting to REM jostle for attention.

“The ability to access work-related tasks through digital streams makes it harder to maintain boundaries between work and the rest of life, and certainly sleep is an important part of life that everyone needs,” says Stewart D. Friedman, a Wharton practice professor of management and director of Wharton’s Work/Life Integration Project. “The counter-revolution that is emerging now is in essence a negotiation in terms of accessibility. It’s challenging for employees who want to be—and be seen as—committed.”

Corporate sleep consultant Nancy H. Rothstein says lack of sleep is nothing less than a public health epidemic. “We know that being a shift worker is very hard on the body, and it’s almost like everyone is a shift worker these days because we’re all doing these crazy things at all hours, and our body likes consistency.” And yet, few companies are doing anything about it. “I’d like to tell you this is the newest thing, but to me it’s the missing link that is really overlooked,” Rothstein adds. “Employers are becoming aware of it, but as far as taking action, that next step, it’s only starting to happen.”

Turning in early for productivity

Americans have a deeply uneasy relationship with sleep. Nearly two-thirds of Americans say their sleep needs are not being met during the week, according to a 2011 poll by the National Sleep Foundation. More than half say they experience a sleep problem every night or nearly every night. Among adults between the ages of 19 and 64, 15 percent in the poll said they slept less than six hours a night on weeknights. The Centers for Disease Control and Prevention puts the number much higher—30 percent, or more than 40 million American workers. Sleep needs vary, but in general a night of seven to nine hours—quality hours—is considered by experts to be ideal.

And little or a poor quality night’s sleep often sets the tone for rest of the day. Wharton management professor Nancy Rothbard has found that workers tend to keep the mood with which they come to work each morning. In a study of a Fortune 500 firm call-center, Rothbard and co-author Steffanie L. Wilk of Ohio State University detected both virtuous and vicious cycles emerging. “People who came to work in a more negative mood than normal were less productive,” says Rothbard of her research, titled “Waking Up On the Wrong Side of the Bed: Start-of-Workday Mood, Work Events, Employee Affect, and Performance.” “People who started the day negatively logged out of the system more, and they were less available to customers,” she notes. “Conversely, when they came to work more positive than normal, they were less likely to use verbal tics and jargon, so they sounded more professional when they were in a better mood.”

Indeed, a bad mood is just the tip of the iceberg of the consequences facing a sleep-deprived nation. The financial toll associated with loss of productivity from insomnia is steep—about $2,280 per worker, or $63.2 billion for the total U.S. workforce, according to the 2011 study, “Insomnia and the U.S. Workforce,” published in the journal, Sleep.

James B. Maas, a psychologist and pioneering sleep specialist, says corporations are increasingly folding sleep education into their wellness programs. Coiner of the expression “power nap,” Maas says he brings speeches and workshops to 50-70 groups a year, mostly corporations. “It’s the number-one complaint people have when they go to the doctor, and they are typically given sleeping pills or told to suck it up,” he notes. “That’s just due to ignorance, because where do you put sleep education in the medical school curriculum? Today, we have 89 different diagnosable sleep disorders, and most physicians can name five, so even if you go to the doctor, until fairly recently you weren’t able to get help.”

Years’ worth of studies show that real dangers come with one’s deficit in the amount or quality of sleep. Circadian, the Massachusetts firm specializing in staffing, scheduling, training and risk-management issues relating to worker fatigue, lists among them: slower response times, increased errors and mispronouncing or slurring words; driving impairments; an increase in risky behavior, and an inability to develop new strategies based on incoming information. These kinds of concerns have long been known to employers like trucking firms, train operators and medical institutions, with long shifts and lives hanging in the balance. But worry has now spread into the white-collar realm.

“Employers with factory workers have always been concerned with this, because there has always been a sense of fatigue leading to accidents and OSHA-like concerns,” says Rothbard. “But I think it’s a slightly different phenomenon we’re talking about with cell phones never being off, where boundaries between work and non-work are being eroded.”

Binge-viewing on Netflix may be keeping some people from their sleep, but for most adults, it’s work. In December’s American Time Use Survey of nearly 125,000 respondents age 15 and older, “short-sleepers” (those sleeping fewer than six hours a night) did in fact list TV, homework, commuting and socializing as activities they were doing instead of sleeping. But far and away, work was cited as the greatest culprit.

“The evidence that time spent working was the most prominent sleep thief was overwhelming,” said Mathias Basner, assistant professor of sleep and chronobiology in psychiatry at Penn’s Perelman School of Medicine, who co-authored the study along with Andrea M. Spaeth and David F. Dinges. Technology deserves the blame—or at least, our inability to regulate it does.

Friedman sees an emerging awareness about the relationship between sleep and the workplace as part of a continuum. “It’s a great movement forward, building on the human potential movement of the 1960s and 1970s into a concern for well-being,” he notes. “And it’s largely because of the economics of healthcare and the mounting body of evidence that productivity and attraction and retention of talent are dependent on the whole person being cared for in a way that is good for the business as well as family and community.” Friedman himself is an “avid napper,” grabbing 40 winks two or three times a day. “I find very interesting places to nap,” he says.

Encouraging naps in the workplace is one innovation, sometimes through the introduction of nap-pods. Other methods being tried include melatonin-regulating lighting, and offering stipends to take courses on healthy sleeping strategies. But Rothstein, who is director of Circadian’s Corporate Sleep Programs, says that although naps may be helpful to some, employees who need naps in the workplace should ask whether there is a more serious underlying cause of fatigue.

“Naps are not a substitute for a good night’s sleep,” she says. “Naps can be a great boost, and napping rooms are cute and trendy. But why are you taking naps at the office? It could be a Band-Aid.” Rather, the question of whether employees are getting enough sleep needs to be considered as part of a comprehensive program, and requires a cultural change—away from the thinking that sacrificing sleep for the good of the company is a macho virtue. “The company cannot control how employees sleep, but if they can have respect for it in the culture, that puts more merits on sleep,” Rothstein adds. “So it’s no longer that you are bragging that you get little sleep.”

Rothstein, who has consulted with Procter & Gamble and Hyatt on sleep education, says a comprehensive sleep program can sort employees into categories—from those who need nothing more than a few tips for sleep hygiene, to referrals to doctors for help with more serious problems like obstructive sleep apnea. For employees who have relatively minor troubles with sleep, Rothstein recommends shutting off technology at least one hour before bed, thereby eliminating interference with melatonin production; avoiding wine before turning in, since wine can make people fall asleep faster but interferes with sleep cycles later in the night, and stopping caffeine consumption about six hours before bed.

“Once people understand what their problem is, the solutions emerge pretty quickly,” she says. “Unless you have a sleep disorder, it’s not rocket science. It’s what I call the disordered sleep that so many of us have.”

Beyond bonafide sleep maladies, Friedman notes that there is an addictive quality to technology that is making it hard for workers to resist sending just one more email before shut-eye. “We have these tools that we didn’t grow up with, and through human history, technological advancement has always preceded the social and cultural knowledge for how to harness the power of the new way of doing things,” he says. “It takes trial and error. It’s a universal problem of feeling like you must respond; there is something about these tools that taps into pleasure receptors that make us feel good about being connected.”

Sometimes, though, someone must be the adult. Some employers are shutting off email servers after a certain time to level the playing field among employees who have no impulse control and those who want a bolder line between work and home. Friedman suggests a middle ground strategy, where employees can request permission to be allowed after-hours access to email in special situations. “The companies that are serious, that are allowing and indeed encouraging and requiring people to have boundaries with their lives, especially with respect to sleep, are going to get the best deals,” he says, “and that ultimately is what will propel change.”

With no impetus coming from employees or labor unions, there is only one obvious catalyst for a new post-technology mindset. Maas finds that each time he gives a speech or workshop at IBM, Apple or Gap—or the New York Jets—word spreads. “Now that people are expected to work longer hours, that lack of interest on the part of corporations is changing,” Maas notes. “Corporations now, mainly at the urging of insurance companies and individuals, are putting in wellness programs, but the vast majority address only exercise and nutrition. Yet exercise and nutrition do nothing without a healthy night’s sleep, and now it’s hitting everybody.” Maas cites as particularly powerful a 2014 Penn Medicine study suggesting that contrary to popular belief, catching up on missed sleep might not be fully restorative, and may lead to irreversible physical damage such as the loss of neurons required for optimal cognition. Many say that studies showing a correlation between sleep deficits and conditions like heart disease, type two diabetes, cancer and early-onset Alzheimer’s are finally getting the attention of corporations.

“In the U.S., the business case drives it,” says Rothbard. “Certainly it’s evolving very piecemeal. If there is a sense that we are being less productive because of all this creep of work in the non-work space, or if it’s affecting the ability to retain top people, then that is a wake-up call.

Source: The Wharton School of the University of Pennsylvania