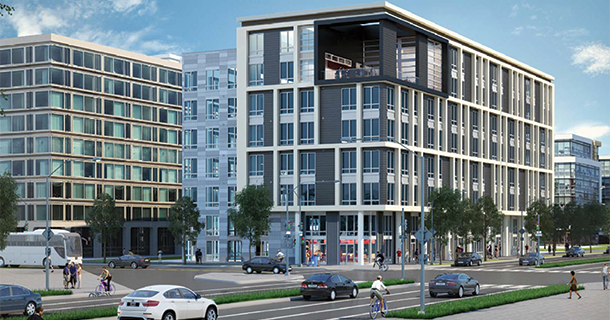 The code now permits light-framed buildings of wood or steel, which are often faster and less expensive to build than equivalent heavy-framed structures, to reach eight stories and up to 85-ft. high—just shy of the 90-ft. limit the Height Act imposes outside of downtown.

How much less expensive? The blocks (right) illustrate three potential scenarios for a light frame apartment building built with wood or steel studs, and sprinklers.

Last year, seven- and eight-story buildings had to be built from heavy-duty concrete or steel, welded or poured on-site, for fire reasons. This “Type I” construction process is time-consuming, material-intensive, and expensive.

Eight-story buildings made economic sense on 14th Street NW, where land values are high. But the high cost of construction stymied development in less pricey neighborhoods.

What the 2015 building code permits is a compromise, with a taller podium of concrete framing. That’s the middle example. This building has 23 percent more area than the building on the left, but costs only 26 percent more.

D.C. currently operates under the 2012 version of the IBC, but will soon start reviewing the 2015 code for formal adoption. D.C. law requires that the Council consider adopting the updated IBC by July. Maryland is on a faster track, having adopted the new code in January, and Virginia is about one year behind.

The new code in practice

One site where this compromise is being applied is adjacent to the Waterfront metro station. In 2007, a developer first proposed building apartments on two parking lots between Arena Stage and the Metro.

Since Southwest D.C. is considered part of downtown, it has a 130-ft. height limit, and the developer got zoning approval for a pair of 11-story, 112-ft. tall reinforced-concrete high-rises.

Under the new building code, the concrete podium can have multiple stories.

To take advantage of the change, the new plans for The View to include a two-story concrete podium with five and-a-half stories of wood frame above, according to drawings within the zoning filing. The podium will contain a retail space (probably a restaurant) facing Arena Stage, resident common areas, and apartments.

Builders have a new material at their disposal

Another building code change that took effect in 2015 officially allows cross-laminated timber (CLT), a mega-plywood that mimics the heavy timber beams of yesteryear. The code limits CLT buildings to the same heights as conventional, light frame buildings, even though some countries’ codes allow its use for taller buildings: 10-story buildings have been built from it in London and Melbourne.

For now, CLT may find a niche in commercial buildings due to its unique appearance, and ability to span wide-open spaces. The first mid-rise CLT building in the U.S., a seven-story office building, will break ground this summer in a Minneapolis neighborhood known for its brick lofts.

Bob Pfefferle from developer Hines (which also built CityCenterDC) told Kristen Leigh Painter of the Star-Tribune, “it provides an authentic building that is respectful of the neighborhood. This will have the ambience of the old warehouses with timber beams that everyone wants, but solves all the problems of energy efficiency and light.”

CLT could be an intriguing new technology to watch for in new commercial buildings in areas with an industrial heritage.