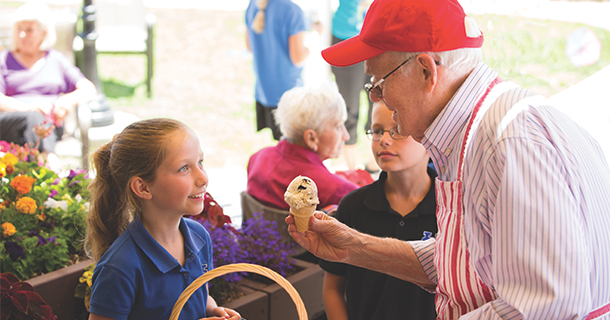 For some, the resident participation has helped with more authentic messaging, which has led to a boost in referrals and a competitive edge against other housing providers. At leas four senior living providers include residents in their marketing and sales processes through personalized collateral and ambassador programs. The positive reactions from prospective move-ins who interact with residents have helped bolster referral results, and providers say the effort of including current residents in sales and marketing more than compensates for certain challenges.

Gone are the days of corny stock photos that are a dime a dozen. These days, marketing teams are focusing on highly personal and creative depictions of real life in senior living communities.

Silverado, a California-based memory care provider with communities in six states in the West and Midwest that also offers home and hospice care, decided to rebrand and initiated the Silverado Photo Project two years ago to capture real residents in real settings for promotional materials.

So far, the project has been implemented across 16 Silverado communities, showcasing residents in their homes in the communities, doing their daily activities.

“They are the stars,” Silverado’s creative director Frederic Tiberghien says of the residents. “They are in the center of it.”

Since the project began, the photos have become a conversation starter for prospective residents and have boosted the referral program, says Beth Abbott, Silverado’s VP of marketing.

While the engagement has been positive, there are some added challenges to using memory care residents instead of traditional stock photographs or models.

“Working with the population that we do, with memory care, it’s important that we come in every day and meet them wherever they are,” says Abbott. “They may be having a great day or they may be having a day when they aren’t feeling as social, and that’s okay. A lot of times we have an idea of the shots we would like to capture, but it really ends up that we get what’s available that day.”

Abbott adds that being flexible in the project is key to capturing successful shots. Most residents are eager to get involved, she says, spending time beforehand at the community salon to prepare.

Other providers, like Avanti Senior Living, have also used photos, videos and testimonies of residents for promotional materials, but have taken the involvement a step further by changing community policy.

Avanti, an assisted living and memory care provider based in The Woodlands, Texas, that operates communities across that state and Louisiana, asked residents what they wanted from their community and turned those ideas into marketing strategies as well. Community engagement became a selling point.

Another marketing change the provider made was taking its own images to represent real moments happening in the communities.

“When we use stock photos, they wind up in other people’s marketing,” says Tiffany Nuche, a market analyst for Avanti Senior Living. “The benefit ­of using the resident’s photos is more personal.”

Nuche says the photos help families make decisions with their loved ones for senior housing solutions, and that the benefits of the personal branding touch outweigh any obstacles of getting the photos ready and involving residents.

“There are a lot of steps involved to make that decision to put a love one in a community,” says Nuche. “The residents like being helpful in that way. To be able to spread the word is why they want to be involved.”

Beyond photographs, videos and personal testimonies, providers are getting their residents involved on the sales end by giving tours, hosting lunches and volunteering to meet with prospective residents to answer questions and share personal experiences.

With 18 communities in 10 states that offer a full care continuum, Baltimore-based Erickson Living started including its own residents for marketing materials before adding an ambassador program over 10 years ago.

Getting residents involved has been an easy process, says Jodi Marsico, vice president of advertising with Erickson.

“A lot of residents volunteer,” says Marsico. “They are passionate about their experience of living in these residences and a lot of seniors are interested in volunteering in general. So, this is a way for them to give back to their community.”

There is some strategy to choosing the right residents to feature in marketing and to serve as ambassadors, and Erickson tries to include snapshots off all different kinds of people that live in the residences.

“Obviously we want to highlight people from diverse backgrounds,” says Marsico. “We’re not just looking for married couples. We’re looking for a mix of people at different stages in their lives to ensure they are relatable to who we are marketing to.”

“They really enjoy having the opportunity to sit and learn,” says Marsico. “It’s such a big decision and there are so many emotions going through the prospect’s head. Knowing that someone has gone through the process and seeing how they’ve made that transition is comforting.”

In Erickson’s Riderwood Community in Silver Spring, Maryland, 150 residents are ambassadors in the program. This participation has increased referral leads for the sales team, says Marsico.

“Feedback from the prospects that they meet with have told the sales office that the resident ambassadors are an invaluable part of the process,” says Marsico.

Another community that involves residents in an ambassador program is Friendship Village, a continuing care retirement community located outside of Chicago, where residents can participate at many levels, from giving tours to showing off their own apartments.

“Over the last eight years our residents have taken on a much larger role,” says Dean Dellaria, director of sales at Friendship Village. “We have the ambassadors to marketing, a group that is recognized by our resident council as an official association committee. They volunteer and assist our sales and marketing team by attending meetings and participating as requested.”

The ambassador program is so advanced that there are even different stages, ranging from referring friends to volunteering on a discussion panel that meets with prospectives on the road at events. Around 15 residents serve on this panel as ambassadors.

Dellaria, in the industry for 15 years, says that other senior living communities that aren’t utilizing their residents in marketing and sales are missing an opportunity.

“When residents engage with a prospect and discuss what it’s truly like from a first-hand point of view, it carries more credibility than our sales team can convey,” he says. “It means something completely different when it comes from a resident who is actively involved and lives here.”