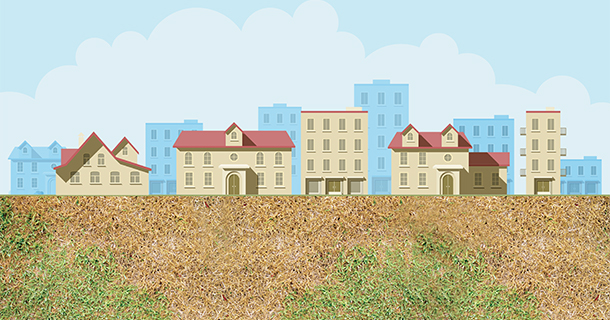 The result amounted to a savings in water use in June of 23 percent, just below the mandate required by the governor.

But while single-family homeowners sacrifice their lawns and are saving water, multifamily residents are lagging far behind.

A study from software provider WegoWise, a Boston-based company that helps large utility users track their energy and water usage, of 600 apartment buildings across the state showed only a 5 percent cut in water use since 2013, while apartment buildings showing savings decreased water usage by 12 percent on average—less than half of the governor’s mandate.

As the water police pick low-hanging fruit by curbing homeowners’ outdoor watering, cities and state agencies are now targeting renters and condominium owners who account for nearly 50 percent of the state’s population, but are less likely to save water because they don’t pay their own water bills and therefore have no incentives to conserve. This conservation disconnect between single-family and multifamily users has touched off a debate in Sacramento, with apartment owners pushing legislation requiring the installation of individual meters in new, multifamily developments. Some want renters to pay a share of the building’s water bill, saying the act of paying for water could spark conservation.

In another sign that indoor users are being tapped, the California Energy Commission recently required lower-flowing shower heads to be sold in stores by July, followed in July 2018 by ultra-low devices that limit spraying to 1.8 gallons a minute—the strictest standard in the nation.

Some existing multifamily units are converting to individual meters, but those are rare occurrences, experts say. Instead, water agencies offer rebates for low-water toilets and require stingy-spraying faucets and shower nozzles.

The city of Pasadena began a mandatory multifamily program by handing out low-flow shower heads and faucet aerators free-of-charge to apartment managers and condo boards, requiring installation of the simple devices via a signed receipt sent back to City Hall.

Cities such as Long Beach, where 80,000 out of 140,000 dwelling units are multifamily, are requiring scofflaws—individual single-family homes or aggregate multifamily communities—to install monitoring devices, like a person under house arrest wearing an ankle bracelet. Water data streams every five minutes and the city can react with a visit or a fine in hours for overwatering or watering more than the limited number of days as set by the city.

“For those customers we’ve had complaints about, we’ve imposed smart meters. It has a built-in cellphone that calls in data. If they are not complying, they get a warning, then a formal written citation,” explained Kevin Wattier, general manager of the Long Beach Water Department.

Know what you use

“There is nothing like data, whether it is for weight loss or your electric bill. That way we can see our performance as compared to our peers,” said Greg Gunther, president of the Granada Court Homeowners Association in Pasadena.

Gunther, aware of the blind spot of multifamily users, has repeatedly published total usage in gallons through emails and his association’s newsletter, and as a result, total consumption dropped, he said.

That may be the exception.

While overall, Pasadenans used 24 percent less water in June 2015 as compared with June 2013, single-family users were out in front of the pack at 25 percent, along with commercial/industrial. Multifamily residents were last, conserving 15 percent, said Eric Klinkner, interim general manager of Pasadena Water and Power.

“I wouldn’t say they (multifamily users) are doing badly. They are just not doing as well,” Klinkner responded during a Municipal Services Committee meeting at City Hall after Mayor Terry Tornek questioned him about multifamily residents “lagging a bit” behind.

Some agencies don’t separate out multifamily from single-family because there are no individual water meters, only master meters on apartments, condo and town-home complexes. The large Central Basin Municipal Water District in southeast Los Angeles County does not. Los Angeles Department of Water and Power also did not have separated data available.

The San Gabriel Valley Water Co., which serves 300,000 people, was praised by the state for saving 35 percent overall in June 2015, above its 16 percent target. However, multifamily residential sales lagged, dropping 25 percent or 10 percent less as compared with June 2013, said Robert Nicholson, the water company’s president.

Multifamily residents in Torrance saved 16 percent in June and July 2015 as compared with the same period in 2013, but that is far less than the 25 percent savings experienced by single-family customers, said Chuck Schaich, analyst with the Torrance Department of Public Works.

Nicholson said apartment and condo dwellers save less water because they don’t pay their own bills, so they can’t try to save money. Also, they don’t see water-use comparisons from prior years as do single-family residents. El Monte went above its 8 percent reduction target in June and some say it is because many residents live in apartments and trailer parks where water use is calculated by master meters and paid by an owner or landlord.

Schaich says it is harder for multifamily users to conserve because they can’t reduce outdoor watering as much as single-family homeowners.

San Gabriel Valley Water recently slapped a surcharge on water bills for residential customers who use more than 20 ccf (per hundred cubic feet) or about 14,960 gallons. Most multifamily residents will never see the surcharge. To try to squeeze savings out of non-single-family customers, the company applied a flat 10 percent surcharge above a certain amount, depending on the type of connection, Nicholson said.

While tiered pricing may be the most effective tool in getting single-family homeowners to conserve water, the popular mechanism doesn’t work for 46 percent of Californians who live in multifamily housing, of which 80 percent are never billed for water.

“In most cases, people who live in multifamily units don’t pay the water bill. It is difficult for managers to provide an incentive when there is no money at stake,” said Adan Ortega, a water consultant for mutual water companies.

“We have no way of monitoring residential water use,” said Earle Vaughn, past president of the Apartment Association of Greater Los Angeles and owner of apartments in Hollywood, Highland Park and Elysian Park. He’s been inside several apartments with leaky faucets and running toilets and no one ever called for repairs.

Vaughn wants the state to provide incentives for adding submeters to existing apartments, especially in Los Angeles where about 38 percent of the residents live in multifamily dwellings. “We give away lots of money for lawns; why isn’t there money to incentivize apartment owners to do submetering?” he asked.

The bill has run into roadblocks in rent-control cities such as Los Angeles over tenant rights. But many in the water industry say if there’s no strong El Niño and the drought lingers, more water conservation will be required from urban areas next year.

In Long Beach, for example, every new residential development being built today or planned is multifamily, Wattier said, making future water savings tougher to achieve. “It is for that reason we’ve been supporting legislation requiring submetering,” he added.

In Pasadena, hundreds of new apartment units are under construction and state law does not require submetering. None of them will have individual meters, said city officials.

“They can do so if they want,” said Wendy De Leon, Pasadena’s water customer relations manager.