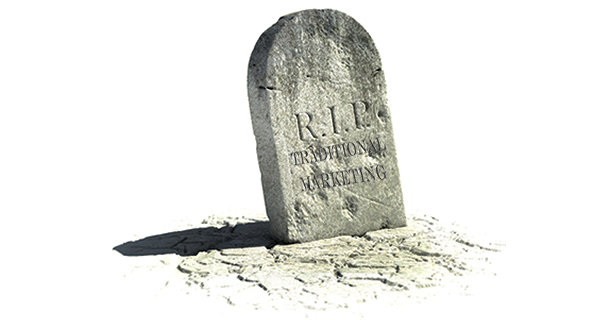 he redistribution of power from brands to individuals is the enduring legacy of social media. The recent rise of ad blocking represents a tectonic shift in the balance of power between marketers and consumers. This technology represents more than just a functional way to block digital ads: it represents the very end of marketing as we have known it.

Marketing is culture, and culture is marketing in America. The mass adoption of television, radio and the Internet required everyone to have a co-dependent relationship with marketing, which became ubiquitous, even celebrated.

In days gone by, ads interspersed the pages of LIFE Magazine, punctuated scenes of All in the Family and framed the webpages of Compuserve.com.

Yet, marketing stands at an existential crossroads.

For the first time we can read its epitaph: “Killed by Consumption, Eaten by Cannibals.” Marketing is slowly being ingested and eliminated by the very consumers it “targets” every day.

As consumers bypass media with greater ease, the social feed is the wormhole to the entire online experience.

The form and formats of marketing are expiring amid a failure to compete for attention with media, influencers, friends and family. One might say that the seeds of marketing’s demise reside within the 50 billion messages sent by individuals each day on What’s App alone.

The culprit behind this “dysadvertopian” future is, of course, technology.

Within technology overall, social media is the fox in the hen house for the acceleration of change.

Social media is far more than a set of networks. It is a behavior, one in which people act on a biological imperative to share and socialize; an organizing principle by which people self-organize by increasingly diverse affinities; and an operating system by which middlemen (such as marketers) are universally disintermediated.

This social behavior is the dark matter that connects all communication, word-of-mouth spelled in 1s and 0s through billions of texts and posts each day. Social media reflects humanity, and as such, it is contradictory: it simultaneously reaffirms what people already believe, while exposing them also to more diverse opinions. It is the friction between more media and fixed time.

So with apologies to John Lennon, I ask you to Imagine.

“Imagine all the people”

Consumers are simply outcompeting marketers for each other’s attention. Seventy percent of consumers trust brand recommendations from friends, but only 10 percent trust advertising, according to Forrester Research.

Everyone understands the power of word-of-mouth to drive purchase decisions. People simply don’t like or trust marketing, an impossible long-term commercial position in the private sector.

The personal brand of the individual sharer commands significantly greater influence than the published brand today.

Given this redistribution of power, brand content is relatively impotent. Corporate brands mean increasingly less as personal brands have come to mean more. Dove Beauty is brilliant marketing, but the campaign pales next to the authenticity of media from Michelle Phan, the self-described “vibe master” and make-up maven.

Set against such trends as these, “marketing”—a term of art—will become an anachronism that follows “new media” (and soon, “social media”) into linguistic extinction.

According to a recent Reuters study, 47 percent of Internet users in the U.S. already use ad blocking technology, and the percentage is higher among younger users. Marketing is increasingly ephemeral against the backdrop of busier, more impatient lives.

FiOS customers watch new releases from their giant home theaters robbing theaters of overpriced popcorn sales and in-theater advertising. Forums such as Reddit are downright hostile to advertising, and 160 million consumers visit its dark recesses for respite from marketers. Instagram’s massive success has stemmed, in part, from its lack of advertising, which only introduced clickable ads in March.

The most frequent form of communication in the entire world is text, which marketers have not effectively penetrated at the same scale.

With each encroachment of marketing into social feeds, consumers move to darker (more private) channels with different permissions and languages. It is a cat and mouse game in which the winner is bound to be the individual. Features such as Facebook’s auto-play violate the basic tenet of consumerism today: The user is in control, and his attention is his own.

“Above us only sky”

Everything arrives and then commingles in feeds and streams, where the flora (media) and fauna (people) of social media reside.

Despite being organized chronologically, the feed is fundamentally non-linear and unpredictable.

The success of marketing depends on reaching people when they are emotionally engaged.

Despite the promise of social advertising and programmatic media buying, these emotional moments are largely unknowable to either marketers or even to individuals themselves. Creative cannot keep up with data, because marketers create advertising rather than narratives.

Every feed in social media represents a mega Walmart, or rather 7,000,000,000 superstores, designed by the individual himself or herself. E-commerce is recast as “everywhere-commerce.”

The right message at the right time on the right channel is a chimera. Human actions and human self-knowledge simply don’t align sufficiently to reach the goal of marketers. What humans want and what they do are simply not (always) the same.

Ad-tech is ultimately a tool of users to filter out marketing, which cannot truly understand the complexities of consumer intent, which is by its very nature mercurial.

“I hope one day you’ll join us”

Every emerging marketplace matures quickly today. Brands are proliferating at an exponential rate, because social media drives everything toward narrower affinities and presents more open access to choice. PepsiCo, for instance, markets more than 25 brands of Mountain Dew alone.

In addition, the Internet and social media have proved wildly efficient at disseminating information. Ideas surface quickly with few barriers to entry and facile access to capital. Choice is only ever a click or a gesture away. Consideration is won and lost in the exchange of a link in a text between friends. Loyalty, one of the primary attributes of a brand, fades in the face of this digital proximity to other choices.

Marketers are quickly eating all the whitespace in the current technological and visual paradigms.

Consumers cannot handle all of this choice, but they do not have to, because technology is empowering them to filter marketing out of their existence.

Ironically, this death of marketing at the hands of its customers is great for business. Each of these trends maps to a point in the future in which marketing loses mindshare.

As consumers bypass media with greater ease, the social feed is the wormhole to the entire online experience.

There is only one channel: you. Your feed is your persona, your intent, your avatar. Personal and professional, commercial and social, all blend in the feed.

The individual accesses these experiences visually like the paragon of a Visual RSS Reader. This feed understands what the individual wants, because the individual instructs it, and the feed learns to differentiate between intent and marketing. It maps intent to location, affinity and authenticity. And as ad-tech becomes a tool of the user, not the advertiser, the feed turns endless choice into actionable choice based on the individual’s intent.

2. Imagine all the people (all online)

As consumers outcompete marketers for each other’s attention, every piece of media contained in the feed is not only shareable, but shoppable.

The functionality resides within the media itself to buy all of the products and services featured in the video, photo or post. The consumer bypasses the unwanted border fences of YouTube hotspots and Zappo’s site with ease. E-commerce loses the requirement to uproot the buyer from their media and direct them to a sterile form in an altogether different digital location to purchase.

Every feed in social media represents a mega Walmart, or rather 7,000,000,000 superstores, designed by the individual himself or herself. E-commerce is recast as “everywhere-commerce.”

3. Above us only sky (not networks)

As the individual controls the marketing experience, communication shifts from public to semi-private.

In the social media 1.0 world of Twitter and Facebook 2015, the excitement of being able to share with everyone resulted in an initial urge to, well, share with everyone. This openness acted as an invitation, or permission, for marketing to participate in everyone’s social experiences.

This is the legacy of Snapchat, in which consumers find darker, more private places to elude the weird uncle that is marketing. Ephemerality of content actually increases its value today. Teens continue to create their own vernacular. It is tete-a-tete between consumers and brands, in which the more the brands infiltrate social experiences, the more the individual seeks darker, more personal channels.

Marketing itself is a product no one likes or trusts, but which consumers could not avoid. Consumer control is a tectonic shift, not a trend.

The era of social media (public) gives way to the era of experiential media (semi-private).

4. I hope one day you’ll join us (in the marketing free future)

As marketing matures toward extinction amid a maturing consumer landscape, two types of marketing survive like cockroaches after the apocalypse.

Any direct marketer can relate how “free” trumps other messages.

Second, sponsorships such as “Maxwell House Presents The Cavalcade of Starts,” in which the relationship between marketer and media is transparent, and the individual receives genuine value in return also persist. The digital Gazprom signs witnessed on television around the Women’s World Cup arena in Vancouver are here to stay.

Content marketing evolves into an exercise in commissioning rather than creating. Influencer marketing reigns, because it represents the midpoint between crappy brand content and user-generated media. Brands have largely failed at content marketing, and cannot compete with technology or creators in this future.

You may say I’m a dreamer, but I am not the only one

Of course, this article is not solely about the future. It strives to outline an emerging marketing cosmology about how marketers should behave today; the ways in which we can future-proof ourselves against these trends; and how we adapt in the short term to greater consumer control and more deeply immersive media. Too many marketing departments are operating business as usual when they should be fighting for survival.

The Internet of the future and the Internet of the past do not destroy markets outright. Death often arrives by a thousand (or in this case a billion) cuts. It is difficult for marketers to see the endgame, because the competition from consumers is fragmented into so many small acts.

Marketers’ false sense of confidence is logical in a way. The industry benefits from better data, a larger creative palette and more discerning customers. Today’s golden age seems incongruous with a gradual decline. So, marketers respond to their decreasing share of attention with what they know—even more marketing. But as supply grows, demand ultimately shrinks.

Ultimately, any path forward for marketers is based on capitulation to, not competition with, the consumers.

Marketing is at an inflection point in a battle it cannot win without joining the other side.

Marketing itself is a product no one likes or trusts, but which consumers could not avoid. Consumer control is a tectonic shift, not a trend. This balance of power has shifted, irrevocably. Technology and individuals represent an unbeatable team.

So. Imagine there’s no marketing.

It is easy if you try.