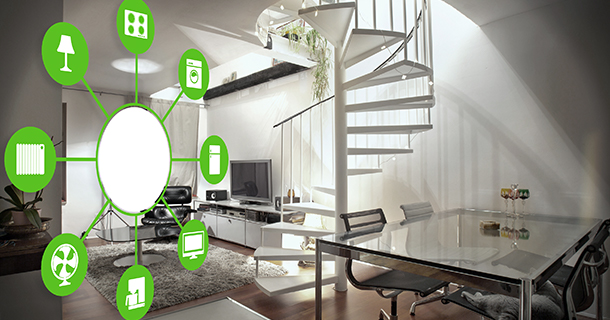 That’s the vision some technologists have for the future of domestic living, and a startup named Brain of Things says that it is developing what the company’s founder refers to as “robot homes” in three locations in California.

These apartments come with a stunning array of sensors and automated fixtures and appliances. They also have the ability to learn and adapt to residents’ habits and preferences to an almost creepy degree, thanks to computer servers that collect data and use it to build models of behavior using machine-learning algorithms.

“The house knows the context, whether its occupants are watching a movie or sleeping,” says Ashutosh Saxena, a research fellow at Stanford and founder of Brain of Things, based in Redwood City, California. “As they walk around, our apartment follows how they act, and it can know a lot.”

The blinds in the apartment will automatically lift when you rise for work in the morning, and lower mechanically at the right time in the evening. If the apartment senses that you just got up for a glass of water in the night, it will light the way without blinding you. It can even learn to keep the blinds lowered for longer on Sunday morning if you got in late or had friends over for a party.

Some might question whether their home really needs to take on a life of its own, but there is an undeniable trend toward adding more intelligence, connectivity, and communication ability to home fixtures.

The thermostats sold by Nest, now owned by Google, learn to recognize users’ heating preferences, and products from companies such as Smart Things make it possible to access existing devices over the Internet and program them to behave more intelligently.

Saxena’s academic research focuses on ways for robots to learn and share information. He says that while a great deal of attention has been paid recently to automating cars, automating the home may be even more important. “People spend 5.5 percent of their lives in cars,” he says. “We spend 68.7 percent of our time at home.”

The homes that Brain of Things is developing are fitted with around 20 motion sensors, and the lights, the appliances, the entertainment systems, the heating and air conditioning, and the plumbing are all connected and automated. There is also an automated monitoring and feeding system that will reveal what a pet is up to during the day.

A resident can operate devices using a manual switch, but it’s also possible to use voice commands or a smartphone app. Over time, the apartment will learn a person’s preference and try to preempt them, though its behavior can also be overridden at any time using a regular control.

The technology also helps with maintenance, Saxena says, by identifying problems early. Anticipating privacy concerns, he adds that there are no sensors in the bedrooms, and the data collected by each apartment doesn’t leave the building.

A few people are already living in apartments developed by Brain of Things in collaboration with a property development firm in Santa Rosa, Calif. The technology, which adds about $125 to the monthly rent, costs the property owner about $30 per month to install and maintain. It isn’t yet possible to retrofit an apartment with the technology, but Saxena says that’s something the company may offer in the future.

Author: Will Knight is senior editor for AI at MIT Technology Review.