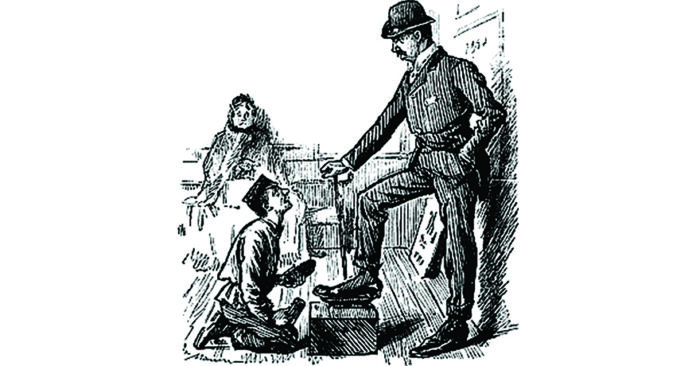 The New York Times recently ran a front-page exposé of segregation by wealth in the booming cruise business. The article, by Nelson Schwartz, was entitled “In an Age of Privilege, Not Everyone Is in the Same Boat.” The gist of the story is that Norwegian Cruise Line has constructed one of its newest vessels to provide separate luxurious quarters (the “Haven”) to some 275 elite guests out of the 4,200 total passengers the ship can carry. These guests pay a premium, which in addition to an upgraded cabin, grants them preferential access to the rest of the ship with a simple flash of a gold card.

Schwartz condemns the system as a return to the unfettered privilege of the Gilded Age—the kind of rigid class separation that held sway on the Titanic on its ill-fated maiden voyage more than a century ago. The indictment is not confined to luxury cruisers, but extends to any form of wealth-preference, including first-class fares on airlines or frequent flyer programs that allow those who pay to avoid the lines that everyone else faces. Perhaps the New York Times should take its own medicine and eliminate its tiered pricing, which currently ranges from $195 to $488 a year.

According to Schwartz, there is some disagreement over whether Norwegian Cruise Line has hit on the right strategy from a business perspective. Its competitor, Royal Caribbean International, gives deluxe passengers the same preferred treatment, without conscious physical separation within the ship. Schwartz regards all of these efforts to woo the wealthy as manifestations of the same unprincipled rejection of the norm of social equality. He quotes Thomas Sander, long time director of a Kennedy School program on civic engagement, with this jeremiad: “We are doing a much worse job of living out the egalitarian dream that has been our hallmark.” Schwartz thinks that the onset of the new “velvet rope” separating the haves from the have-nots represents a regrettable turn in American social life, one that mirrors rising income inequality.

Schwartz’s article is long on superiority, but short on analysis. His basic methodological problem is to put condemnation before understanding: he never asks the question of how these markets came to be organized as they are or what, beyond lamentation, should be done about the current state of affairs. The descriptive analysis has to start with the simple observation that tiers of service are fundamental in every area of social and economic life. It is obvious enough that people with greater levels of wealth tend to congregate together. The instinct toward separation applies at all levels of the income scale. Every collective social activity involves the use of common facilities, which are a form of limited-access public good that applies to all persons who purchase private accommodations in the common facilities—e.g., cabins or staterooms on cruise ships, seats on trains or airplanes, or tickets to theaters and sporting events.

Here’s why. Most people budget their funds to have a uniform level of quality across both the separate and common dimensions of the services they purchase. They do not want to pay for public accommodations that are markedly inferior—or superior—to their private accommodations. It follows therefore that the common elements of service diverge strongly for different classes of customers. This uniform set of individual preferences implies that any voluntary market will seek to satisfy all groups simultaneously by separating out the groups so that each can receive their preferred mix of services. The ensuing separating equilibrium condition does not hold only for the rich. It holds for any differences in income and wealth, which is why there are often more than just two tiers of service available for consumers to choose from.

As Schwartz acknowledges, private firms (even from egalitarian Norway) recognize the needed degree of differentiation. Yet they also recognize that there are gains from trade by having large facilities that can accommodate multiple tiers of service. There are major economies of scale from running large ships because it allows for improved levels of certain common services, e.g., the engines and navigation equipment that are desired by all regardless of the tier of services they purchase. Thus if Norwegian Cruise Line decided to move its luxury passengers to a separate ship, the quality of service received by all, rich or not, would be worse. The rich would be consigned to a smaller ship with fewer services than they desire, and the less affluent would also have to pay more for inferior services, since the more affluent passengers would not be contributing their funds to the common facilities. The usual conclusion then holds: forced integration of consumers into a single group would make everyone worse off.

This conclusion should come as no surprise. If the removal of the separate tiers of service allowed for better treatment for all passengers, cruise liners would adopt that approach voluntarily as a sure path to profit maximization. There is no conflict between Norwegian Cruise Line and the passengers who flock to its services. The only conflict is with indignant writers like Schwartz who see something vaguely insidious in relationships that they do not understand. But taking anger and offense into account does not improve the social calculus. The proper view of the problem of class differences is as follows: the greater the deviation between the established practices in voluntary markets and the proposed reforms, the higher the likelihood that forced changes will produce large social losses across the board.

And what’s true at sea is also true on land. Consider the provision of housing in a city. Independent of whether individuals prefer small or large housing units, they have preferences in the kinds of amenities and services that their building’s common facility supplies. People living in one-bedroom or studio apartments in expensive developments are willing to pay for 24-hour doormen, concierge services, and gyms just like those people who live in larger units within the same building. If they were not willing to pay for these services, they could move to other facilities that economize on these services, keeping size constant, in order to save on rent. A well-functioning voluntary market will thus have units of different sizes within the same development, occupied by persons with a roughly consistent demand for amenities.

The situation becomes more ominous with the provision of affordable housing units under a wide range of government mandates. These mandates arise because under modern constitutional law local governments are allowed to grant or withhold building permits, subject to conditions that they deem appropriate for their conception of the general welfare of the larger community. That broad mandate goes far beyond the simple and sensible requirements that new construction be safe for residents and passerbys alike, and it be constructed in ways that allow it to link up seamlessly with key roads, sewers, and utilities. Under modern law, a state or local government can deny a building permit to any developer that does not hold aside some fraction of its units for lower and middle housing, at mandated prices far lower than market rates.

A moment’s reflection will reveal the two major problems with these affordable housing mandates. The first is that the mandate comes as a command, which increases the cost of housing across the board. The government that imposes the mandate does not have to compensate the developer for the higher costs and lower revenues that come with it. Hence a contraction in the available supply of units will drive up prices across the board. Worse still, the mandate puts the developer in a position where it is no longer easy to supply the desired level of common services to residents who have radically different demands. One class of customers is willing to pay for doormen and service amenities that the other customers are not.

The usual response to this challenge was to introduce a costly form of separation inside the development by creating a so-called “poor door,” or separate entrance and lobby for the recipients of the affordable housing units. As noted earlier, these separate entrances will have a clear, if uneasy, level of market acceptance because they allow for improved services to all classes of tenants. But by the same token, the open and visible class differences pour hot oil onto the political debates over income inequality. In progressive bastions like New York City, the result is the passage of a new provision in the state’s already comprehensive rent-regulation bill that provides: “Affordable units shall share the same common entrances and common areas as market rate units.” Prospective tenants may choose to opt out of such schemes entirely, by renting from the existing housing stock, thus pushing high rents still higher.

This provision is the surest way to stop the construction of new rental units where they are most needed. The entire economy of affordable housing depends on the ability to use the gains on the market rate units to subsidize the lower rates on the affordable units. Poor doors are not needed in most buildings because the tenants have self-separated according to their level of demand for amenities. But these doors were introduced precisely because they are vital to maintaining sustainable affordable housing projects. Like it or not, the market-rate units will in many instances go for far less if the separate facilities are not maintained. In general, it is most unwise to have hidden cost subsidies to sustain housing, or indeed any other markets.

To people with a modicum of prudence, warning bells should go off when social planners dictate systems of social interaction that are nowhere found in voluntary markets. After all, if we should have common doors, why not mandate that all new apartment units or ship cabins be of the same level of quality to avoid the feared inequities of differential wealth? To anyone aware of basic commercial realities, this proposal marks the end of new construction and innovation in vital markets. But to the modern progressive mind, the greater the deviation from private market standards, the sounder the social program. Which is why New York City’s rental market is, and will remain, a disaster, in which very few new rental units will be added to the existing stock, while existing units will be gobbled up at ever higher rents.

Author: Richard A. Epstein, the Peter and Kirsten Bedford Senior Fellow at the Hoover Institution, is the Laurence A. Tisch Professor of Law, New York University Law School, and a senior lecturer at the University of Chicago.