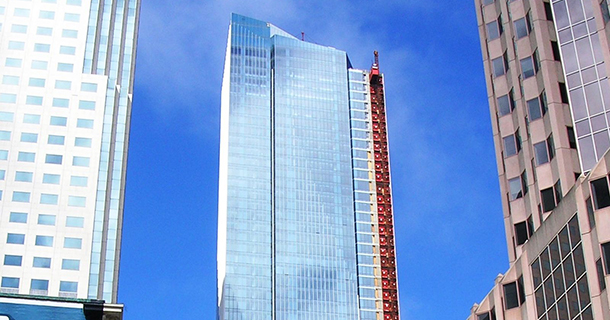 A luxury high-rise in the heart of San Francisco City has been dubbed the “leaning tower of San Francisco” after the building began to sink—and satellite images have now revealed just how bad the problem is.

Data from the Sentinel-1 satellites show that Millennium Tower is sinking by about 40 millimeters a year in the line of sight—the direction that the satellite is “looking” at the building. This translates into a vertical subsidence of almost 50 millimeters a year, assuming no tilting, researchers say.

Although the cause has not been pinpointed, it is believed that the movements are connected to the supporting piles not firmly resting on bedrock.

Pamela Buttery noticed something peculiar six years ago while practicing golf putting in her 57th-floor apartment at the luxurious building. The ball kept veering to the same corner of her living room. Those were the first signs for residents of the sleek, mirrored high-rise that something was wrong.

“What concerns me most is the tilting,” says Buttery, 76, a retired real estate developer. “Is it safe to stay here? For how long?”

The tower has sunk 16 inches into the soft soil and landfill of San Francisco’s crowded financial district. But it’s not sinking evenly, which has created a 2-inch tilt at the base—and a roughly 6-inch lean at the top.

By comparison, Italy’s famed Leaning Tower of Pisa is leaning more than 16 feet. But in a major earthquake fault zone, the Millennium Tower’s structural problems have raised alarm and become the focus of a public scandal.

“When is this building going to stop sinking?” asks Jerry Dodson, an attorney and engineer who paid $2.1 million in 2009 for his two-bedroom apartment on the 42nd floor. “That’s something that no one has been able to answer.”

On the sidewalks outside the Millennium Tower, engineers started working to figure out why the building keeps sinking and if there’s a way to fix it. But the process, which involves drilling deep holes and testing soil samples, is expected to take months. The geotechnical engineer leading the operation, Pat Shires, said existing data indicates the tower “might” sink between 24 to 31 inches in total, but nobody knows for sure.

When the Millennium Tower opened, it became a haven for the city’s well-heeled, and all 419 apartments quickly sold out.

Penthouses have sold for more than $10 million. The tower’s troubles are apparent in its five-floor underground garage, where Porsches and Lamborghinis sit near walls bearing floor-to-ceiling cracks, many bracketed by stress gauges to measure growth.

Meanwhile, accusations and lawsuits are piling up. Dodson and other residents blame developers for what they say is a flawed design. The tower’s foundation, for instance, uses piles driven 60 to 90 feet into landfill, rather than the pricier option of going down at least 240 feet to bedrock.

Millennium Partners maintains its design is safe and says many San Francisco high-rises have similar foundations.

“We did this building the right way,” Chris Jeffries, a founding partner at Millennium Partners, told a news conference. “The building is 100 percent safe.”

Jeffries blames the building’s problems on an adjacent construction site where a city rail terminal is being built. He says the Transbay Joint Powers Authority, the public agency building the $4.5 billion transit hub, dug a 60-ft. hole to create a dry construction site and pumped out millions of gallons of groundwater that wound up compressing and weakening the soil under the Millennium Tower.

Transbay says the tower’s “inadequate foundation is the sole cause of the excessive settlement and tilt.” It released a statement saying the building had sunk 10 inches and started to lean before the agency broke ground in 2010.