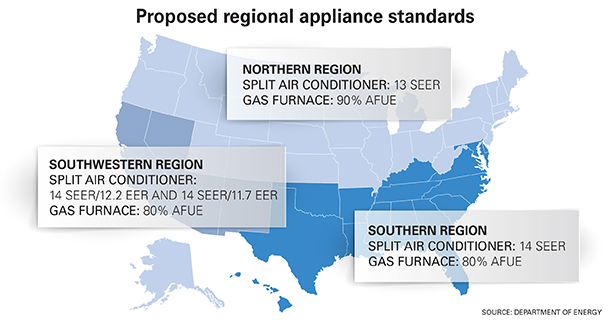 In 1987, the Montreal Protocol was introduced after finding that man-made chemicals, specifically chlorofluorocarbons (CFCs), were creating a hole in the ozone layer. This international treaty’s original intent was to phase out the use of CFCs. The protocol has since been amended four times and signed by 143 additional countries. A recent amendment includes regulated cuts in the production of hydrochlorofluorocarbons (HCFCs). While less damaging than CFCs, HCFCs (R-22) still contain chlorine that harms the ozone layer.

The bottom line for multihousing

The cost of R-22 and other HCFCs has increased with no sign of stopping, ever. While components for air-conditioners, heat pumps and chillers are still produced, the supply and production of HCFCs is diminishing and will soon be nonexistent.

What are the options for the multifamily industry? There is no exact drop-in replacement for R-22 although some hydrofluorocarbons (HFCs) come close. Many run at higher pressures which means replacing the compressor and major components for equipment to run effectively and efficiently.

The most common solution is new equipment that uses R-410A; a more efficient and energy-saving alternative to R-22.

There’s a catch. There are proposed amendments to the Montreal Protocol which address phasing out HFCs, not because of their ozone depletion potential (ODP), but due to their global warming potential (GWP). R-410A has a GWP of 1,890 when compared to carbon dioxide. This means HFCs retain more heat in the atmosphere and so, are on track to be banned by 2030. Another option is hydrofluoroolefins (HFOs). HFOs may be a short-term fix since they are made of different HFCs and are already used in some of today’s motor vehicles.

We’ve reached a tipping point where it is cheaper to replace than repair most cooling systems.

Another alternative being researched is ammonia for smaller applications. Ammonia has been used in refrigeration since the 1800s in large systems and has no ODP or GWP.

More regulations on the way

In April, 2015, the DOE changed the standards regulating Annual Fuel Utilization Efficiency (AFUE) in furnaces and Seasonal Energy Efficiency Ratio (SEER) of air-conditioners and heat pumps. Many contractors are unaware of and/or confused on how to determine what units are acceptable. Another issue is that the DOE decided to divide the country into regions based on heating degree days and have different standards for each region (see map). The good news is that the average home uses 48 percent of its power consumption for heating and cooling and the new standards will help save an estimated 3.7 BTU of energy by 2030. That’s about the current annual usage by Ga., Mass., Mich., Mo., N.C. and Va., combined.

The new retrofit standards raise the AFUE from 78 percent nationwide to 90 percent in the North region, and 80 percent in the South and Southwest, while also raising the bar on the SEER rating from 13 to 14 in almost all applications across the country. New construction standards are slightly higher. The North and Southwest AFUE standards will be 92 percent while the South will be 90 percent. SEER ratings also will climb to 15 in the majority of the country for new construction or significant upsizing.