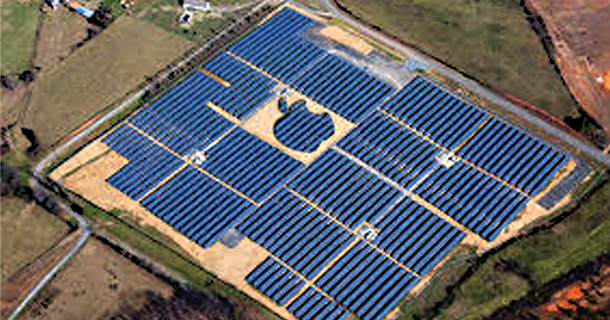 Your company may not be going as fully or directly into the business as Apple, but you may soon want to join the ranks of the energy “prosumers”—companies that both produce and consume energy. As the electric power industry shifts from a model where individual local utilities have a monopoly on electricity provision in a region to a much more dynamic market, these prosumers will be able to make and sell a variety of obscure new products and services like frequency regulation. These services are now lumped into basic electric service, but in the future prosumers will be able to produce them with their own equipment and sell them back into the power grid. Their monthly power bill will be the net of the energy and other services they produce and the energy they consume.

California, Texas, and most of the U.S. east and north of Chicago already have “bulk” power markets that trade early versions of these new products and services. The players in these markets, licensed and overseen by federal regulators, are almost all utilities and specialized energy producers and traders. However, the trend is to localize smaller versions of these markets, with much lighter licensing requirements intended to draw in a wide swath of business and even residential market participants.

Commercial and industrial firms are prime candidates to become prosumers due to the large size of their facilities, variations in power use, and ability to buy and sell electricity products at scale. The most common and fast-growing source of locally generated (or distributed) power is rooftop solar. Many commercial buildings have rooftops, parking structures, and unused land that can host systems that are significantly larger and cheaper than residential systems. A new study by the National Renewable Energy Laboratory estimates that business rooftops contain 3.2 billion sq. ft. of usable space for solar, enough to power 14 percent of U.S. electric demand. Solar energy can also be contracted, much more cheaply, from dedicated off-site facilities, with any surplus resold into the market.

But solar electricity is only the beginning of the future energy marketplace. Many companies are already in markets where “demand-response” contracts enable them to sell the right to manage a portion of their power use, allowing them to be paid for reducing their energy during hours when the spot price of power is high.

In the future, in addition to selling actual power reductions, companies will be able to sell other currently-hidden services produced by their buildings, solar systems, or vehicle fleets back into the grid. For example, a very small portion of the charge in an electric vehicle’s battery could be sold back to the power company when it needs an extra bit of power at the spot where the vehicle happens to be connected for charging.

Some of the energy saved and resold will come from traditional energy efficiency (EE) investments, which companies have been making for many years. Energy-efficient lighting, motors, and other hardware continue to make good sense for many firms, whether financed on the balance sheet or by third parties who provide the upfront capital and then share the savings on future power bills. However, the explosion of smart digital- and Internet-connected devices has created a new form of energy efficiency that adds immediate control over equipment as a new EE strategy. In traditional EE, one simply replaced device A with more-efficient device B. B operated the same way as A, with no special control. Now, device B can be controlled remotely using software that looks at the hour-by-hour price for electricity and decides whether it is cheaper to run the device now or wait until later. The same software and controls can often facilitate demand response, in which the customer is actually paid a small amount for shifting the time pattern of power use. One new technology, an easily-installed, IP-addressable air conditioner optimizer, could turn millions of AC units sitting atop strip malls and convenience stores into sources of demand response.

It is now increasingly common for leading firms to purchase large amounts of renewable power under contract from large providers as well as produce a portion of their own power. Fifty-three global firms have pledged to convert to 100 percent renewable power (though they have not set a target date). The 24 largest current buyers of renewable power—a group that includes Google, Amazon, Microsoft, Ikea, Equinix, Mars, Dow, Wal-Mart, and Facebook—have bought 3.6 GW of renewable energy since the beginning of 2015, enough to power about half the state of Connecticut.

What can today’s non-energy CEOs do to prepare their firms for a prosumer future? Apple’s huge size, power use, and balance sheet allow it to jump in faster than many other firms, but there is plenty of opportunity to lay the groundwork today, while saving money and helping sustain the environment. A comprehensive energy audit by a qualified energy services firm familiar with the latest smart control technologies, traditional EE measures such as efficient motors and lights, and demand response options is the way to start. This audit will almost certainly reveal opportunities to save money and sell (or at least conserve) some energy services right now. Several NGOs and business leaders, including the World Resources Institute and the World Wildlife Fund, also have coalitions that help firms purchase renewable energy using creative contracting solutions. The full prosumer future may be a decade or two away, but the dawn of the era is already here—just ask Apple.

Author: Peter Fox-Penner is the director of Boston University’s Institute for Sustainable Energy, and Professor of Practice, Questrom School of Business.