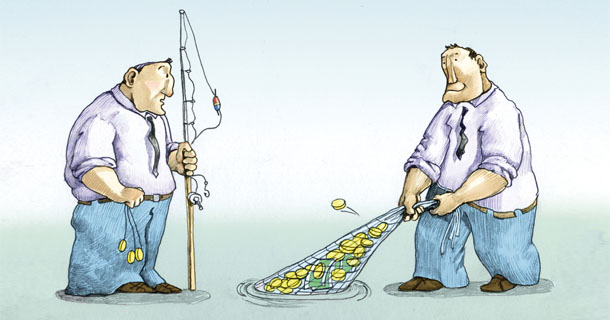 For those of you who’ve been in a cave recently (and one without internet access), United Airlines recently encountered a situation where they had too few people who were willing to give up their seats to a flight crew who needed to fly on the plane.

When you have a shortage of anything, you have several choices:

United cycled through all three: they initially made the mistake of only trying a half-hearted attempt at the first option, then progressed to the second, and finally resorted to the third (i.e. they “re-accommodated” an unwilling passenger). But if they’d really given the first option a fair chance, they could have avoided what’s now become a $3 billion loss in market capitalization.

They initially offered money to seatholders and then raised the price when there weren’t enough takers (#1). But they stopped at $800. Unfortunately, only two ticketholders took the bait at this price. In economic terms, “the market didn’t clear.” Had they gone just a bit higher ($1,000? $1,500), they’d have found takers. And if they’d let “the market” decide, they’d have bought the seats from the seatholders who valued them least, so they’d have had a transaction with happy customers. Instead, they picked randomly (#2), and eventually removed a passenger by force (#3).

In addition, they fell afoul of what’s known as the “endowment effect.” This means that individuals place a higher value on something (like an airline seat) once they own it than they did before. In other words, once they’ve been seated, the airline seat becomes more valuable than it was before they were seated. So United further shot themselves in the foot by negotiating with passengers after they’d boarded rather than before.

In the future, instead of being on the wrong side of the Internet (“United Fight Club” and other assorted memes, anyone?) they should use it to their advantage. They can take their existing mobile app and modify it so that their passengers can participate in what’s called a “Dutch Auction.” In this setup, the sellers (the passengers) privately post the price at which they’d be willing to surrender their seat. So when they’re overbooked, United simply looks at the schedule of prices, and choose sequentially from the lowest prices on up until they’ve acquired the seats they need. And like all free market transactions, it’s a win-win—they get the lowest possible price, and only make transactions with parties who think it’s in their best interest.

UPDATE: United has settled the passenger dragging incident. United Airlines is now offering passengers who volunteer to forfeit their seats on overbooked flights up to “$10,000 and limit the use of law enforcement to safety and security issues alone.” Read more.

United CEO Oscar Munoz has a reputation as one of the best communicators amid the ranks of the nation’s CEOs. Here’s his letter to the United patrons:

Dear (name):
Each flight you take with us represents an important promise we make to you, our customer. It’s not simply that we make sure you reach your destination safely and on time, but also that you will be treated with the highest level of service and the deepest sense of dignity and respect.

Earlier this month, we broke that trust when a passenger was forcibly removed from one of our planes. We can never say we are sorry enough for what occurred, but we also know meaningful actions will speak louder than words.

For the past several weeks, we have been urgently working to answer two questions: How did this happen, and how can we do our best to ensure this never happens again?

It happened because our corporate policies were placed ahead of our shared values. Our procedures got in the way of our employees doing what they know is right.

Fixing that problem starts now with changing how we fly, serve and respect our customers. This is a turning point for all of us here at United – and as CEO, it’s my responsibility to make sure that we learn from this experience and redouble our efforts to put our customers at the center of everything we do.

That’s why we announced that we will no longer ask law enforcement to remove customers from a flight and customers will not be required to give up their seat once on board – except in matters of safety or security.

We also know that despite our best efforts, when things don’t go the way they should, we need to be there for you to make things right. There are several new ways we’re going to do just that.

We will increase incentives for voluntary rebooking up to $10,000 and will be eliminating the red tape on permanently lost bags with a new “no-questions-asked” $1,500 reimbursement policy. We will also be rolling out a new app for our employees that will enable them to provide on-the-spot goodwill gestures in the form of miles, travel credit and other amenities when your experience with us misses the mark. You can learn more about these commitments and many other changes at hub.united.com.

While these actions are important, I have found myself reflecting more broadly on the role we play and the responsibilities we have to you and the communities we serve.

I believe we must go further in redefining what United’s corporate citizenship looks like in our society. You can and ought to expect more from us, and we intend to live up to those higher expectations in the way we embody social responsibility and civic leadership everywhere we operate. I hope you will see that pledge express itself in our actions going forward, of which these initial, though important, changes are merely a first step.

Our goal should be nothing less than to make you truly proud to say, “I fly United.”

Ultimately, the measure of our success is your satisfaction and the past several weeks have moved us to go further than ever before in elevating your experience with us. I know our 87,000 employees have taken this message to heart, and they are as energized as ever to fulfill our promise to serve you better with each flight and earn the trust you’ve given us.

We are working harder than ever for the privilege to serve you and I know we will be stronger, better and the customer-focused airline you expect and deserve.