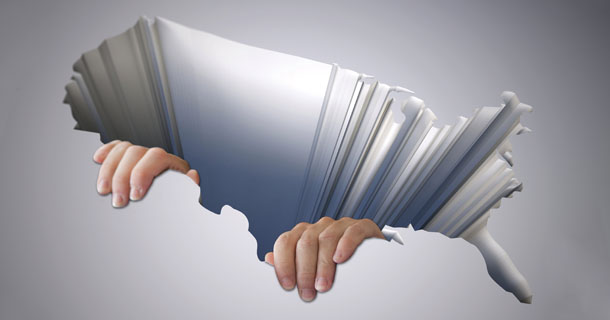 The reasons for the shift in housing patterns are numerous, ranging from the demographic (delayed marriage) to the financial (fast rising home prices). Of course, the intervening years included the foreclosure crisis which forced millions of owners to the sidelines and reminded Americans that home prices do not always go up.

Now what? One opinion: As homeownership goes, so goes the nation, meaning those with a horse in this race (basically everyone) must act. That’s the takeaway of a report out this week from the Rosen Consulting Group, which notes single-family housing construction is one of the only sectors that continues to lag the broader economy after seven years of recovery.

Since 1959, on average, housing-related spending—ranging from mortgage payments and rent to moving costs and furniture—has accounted for 18.9 percent of gross domestic product annually. That share has been declining since the mid-1980s, recently falling sharply. Last year housing expenditures hit a low of 15.6 percent of GDP. The report also estimates that rates of homebuilding in line with the long term average would have added $300 billion to the U.S. economy last year, or a 1.8 percent increase in gross domestic product. The Bureau of Economic Analysis estimates real GDP gained just 1.6 percent in 2016.

Meanwhile, the decline has not been evenly distributed. The likelihood that you own a home varies depending on your race, your age and where you live. The homeownership rate for African-Americans is down 7.6 percent from the previous peak and is currently 30 percentage points lower than white households’. Households aged 70 to 74 are most likely to own a home (81.7 percent). Ownership rates decreased the most in the west and south regions of the country. The drop in homeownership was also more pronounced among single-parent families and one person households.

A history of the homeownership

“The implications of this stunning decline in homeownership are far reaching. Ongoing weakness in the for-sale housing market not only undermines the ability of middle class households to accumulate wealth, but also represents a substantial hurdle for the recovering economy,” note the authors, led by Kenneth Rosen, head of RCG and the Fisher Center for Real Estate and Urban Economics at University of California, Berkeley. “Bolstering homeownership in a safe and sound way is therefore not just about helping households to secure greater financial stability, but may in fact be the most important key to returning the U.S to a path of robust economic growth.”

In mid-2016 the homeownership rate hit 62.9 percent the lowest level since 1965—the year the Census Bureau began measuring owner-occupied-housing as a share of households. Since then the average homeownership rate has been 65.3 percent, but the trend line has not been straight.

Rates increased from the late-1960s through 1980, but then declined in the wake of Federal Reserve interest rate hikes and the resulting jump in mortgage rates. Homeownership bottomed at 63.8 percent in 1986 and did not start rising meaningfully until 1994. In the subsequent decade, economic expansion, the dot-com boom, favorable lending policy and increasing home prices catapulted the rate to a high of 69.2 percent in 2004—approximately 11.3 million new owner households.

By late-2007, however, overly lax lending standards that had juiced the rate caught up with the market. According to CoreLogic and the Joint Center for Housing Studies, between 2007 and 2015, 9.4 million households lost homes. The foreclosure crisis and recession destabilized the home buying market, household finances and confidence in homeownership as an institution. The homeownership crossed below the 50-year average in 2013, hit a low in the second quarter and finished last year at 63.7 percent.

The growing popularity of renting has led some to argue that low homeownership is not the crisis some make it out to be. Their logic is that any household formation is good for the economy. However, there is also evidence that renters’ financial stability has been on the decline.

Income is not keeping pace with home prices. From 2012 to 2015 the median national home price increased by an average of 8.2 percent annually. Over the same period nominal median household income increased just 2.5 percent each year.

Life is expensive. Student loan debt totaled $1.3 trillion last year, more than four times the 2004 total. Both the percentage of young adults with student debt and the amount they owe has grown substantially. Meanwhile, the share of renters spending more than 30 percent of their income on housing—the top level considered sustainable—is at an all-time high and down payment requirements have increased. All of this makes it difficult to save enough to secure a mortgage.

Credit is hard to come by. According to the Federal Reserve Bank of New York, in 2006 the median credit score for conventional mortgages was 706. Today it’s 760. CoreLogic data shows that since 2010 applicants with credit scores below 620 have rarely qualified for mortgages.

Homes are hard to come by. Last year construction began on 830,000 new homes (seasonally adjusted). By comparison, housing starts have averaged 1 million annually from 1986 to 2016. In the five years following the recession, mobility—the share of the population that changes homes annually—declined from 6.3 percent to 4.1 percent. As a result, at the end of last year there was just a 3.6 month supply of homes for-sale, according to the National Association of Realtors. The long-term average is four-five months.

“Looking forward, RCG believe that many of the significant trends that contributed to the decline in homeownership during the past decade, will either stabilize or reverse in the coming years, supporting the for-sale housing market,” write the authors. However, they note “hurdles” exist, making action from politicians and other stakeholders necessary.

During the campaign, then candidate Donald Trump bemoaned the low level of homeownership. Tweeting, after the record low rate was announced: “WE will bring back the ‘American Dream!’” with a chart showing the historic path of the rate. As president, Trump’s rhetoric on the economy has not changed much. (He still thinks it’s hugely bad.) The actions his administration has taken and promoted since inauguration day, however, do not on the whole suggest a strong commitment to boosting ownership.

On day one of the new administration the U.S. Department of Housing And Urban Development announced it would not honor an Obama era decision to reduce fees on Federal Housing Administration mortgages. The cut, which was scheduled to go into effect a week later, would have saved a typical FHA borrower, often first-timers, about $500 a year.

Conversely, rolling back financial industry regulations put in place with the 2010 Dodd-Frank Act could make it easier for banks to lend to a wider range of applicants. Some experts question just how much this would loosen consumer credit, especially with mortgage rates on the rise, but an expansion of commercial real estate lending could also help with the supply problem.

Other measures, technically unrelated to housing, could ultimately have consequences for homeownership. For instance, money funneled into universal health savings accounts proposed in the (now defunct) Republican healthcare bill would not be going toward a home down payment. The president’s pledge to increase infrastructure spending would create jobs, a boon for the housing market, but it could also intensify the labor shortage homebuilders claim is preventing them from building now.

As RCG notes: “Ultimately, any serious efforts to revive the American Dream as a national priority will require a thorough understanding of these issues and the many other challenges currently facing the single family housing market, including the hurdles for both individual households and the homebuilder industry.”