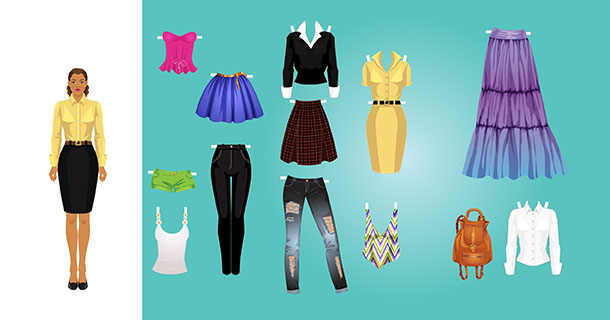 It would be nice if looks didn’t matter at all, but that’s rarely the case. “How we show up and deliver our work is as important as the content,” says Amy Jen Su, cofounder of Paravis Partners, an executive training and coaching firm, and author of Own the Room. “It can be heartbreaking to see a person who does good work not succeed because of how they appear.” But navigating this kind of conversation with your employee is tricky, says Joseph Grenny, coauthor of Crucial Conversations and cofounder of VitalSmarts, a corporate training company. “It’s uncomfortable and awkward,” he says, “and at the end of the day, a lot of it is subjective.” Here are several tips to follow the next time you need to address this delicate subject.

Before you do anything, reflect on what the real problem is. If the clothing is hindering your employee’s ability to be taken seriously, that’s one thing. If you simply don’t like the clothes, that’s another. “Don’t translate your personal preferences into business requirements,” warns Grenny. Maybe you’ve always thought that your male colleagues should wear a button-down shirt and slacks, if not a suit, to work. But is that really what’s best for the business? Be thoughtful about any bias you might be bringing to the situation. Su suggests you look for concrete evidence that the person’s appearance is affecting their success: Does it violate any explicit company dress code? Has it ever distracted people from focusing on the content the employee is delivering? Have you gotten negative feedback from important stakeholders, such as clients or senior management?

Get over your discomfort

If you decide that there’s a business impact that needs to be addressed, don’t assume that the conversation is going to be awkward. Sure, the “discomfort is very real,” says Su, but remember, this isn’t about you. “Make it about the person and your responsibility as a manager to help them succeed,” says Su. While you should be prepared for pushback, defensiveness, or hurt feelings, it’s possible none of that will happen. “I’ve been surprised by how many people want this kind of feedback and welcome it,” Su explains. “Dress and appearance is often this weird, unspoken thing.” Grenny agrees. “We sometimes assume that [advice on this topic] will feel intrusive, but some people just don’t care about these niceties, and for someone who’s thought zero about them, it may not be personal to them,” he says. The person may just be unaware of the team, organization, or industry norms around appearance.

Prepare for the conversation

“Preparation is really important,” says Grenny. Think through how you will frame the discussion. “Focus on your intention and communicate that you want them to be as successful as possible.” Construct a sound argument grounded in business reasons. “Don’t make this about right and wrong, good and bad, decent and indecent,” says Grenny. Instead, talk about how their appearance can help them improve internal and external relationships. It’s also a good idea to consult your HR department beforehand to avoid potential legal problems. “You want to make sure that all of those HR concerns are off the table and that you don’t say anything that would be considered discriminatory,” says Su.

During the conversation, “don’t understate or sugarcoat your message because you’re worried they’ll feel upset,” says Grenny. Come out and say what you need to. Su suggests something like, “I want to give you feedback on your overall presence and make sure that your appearance is aligned with the high-quality professional work that you do.” The goal is to “enhance their visibility, influence, and presence.” You might even share evidence that appearance matters, such as stats on how looks influence success at work or the proven link between personal grooming and income.

If you don’t have an explicit dress code, own your part in creating the situation. “If you haven’t communicated what you expect, then you have no right to hold someone accountable. You’re also going to set yourself up for legal issues,” says Grenny. You might say something like, “I realize that as a manager I’ve had some expectations and haven’t shared them. That’s my fault.”

Don’t just come out and say, “Your shirt is not appropriate.” That feels like an attack and doesn’t help them fix the problem. Su suggests calling someone’s appearance their “book cover” to keep the discussion less personal. Give them concrete advice by restating the norms you hope they’ll adhere to. For example, you might say, “More tailored is better than too short or too tight.”

It may be that a person’s appearance is a sign of other problems, particularly if it’s changed over time. Leave room in the discussion (by not doing all the talking) for the person to share what they might be going through. “If someone is particularly disheveled, check in on how things are going. Make it a two-way conversation. Be compassionate,” Su suggests. “There may be something going on that you don’t know about.”

Unless your company asks people to wear a uniform, make it clear that you want people to dress in a way that feels comfortable and authentic to them, while staying within the company’s norms. “You’re not asking them to conform 100 percent and give up who they are. You’re asking them to be aware of the dress code and decide for themselves what is the most authentic expression of that,” says Su.

Don’t make it bigger than it is

At the end of the discussion, it’s helpful to restate your intention. You might say, “This is about your professional dress, not about your value to the organization or my desire to work with you.” You don’t want to leave on an awkward note. Grenny adds, “Put this into the small box that it belongs in, and leave it there.” That doesn’t mean you shouldn’t discuss it again. In fact, it’s a good idea to follow up a few days later to see whether the person has any questions. When you notice change, compliment.

Make rules clearer for the next time

“An ounce of training prevents a pound of conversation,” says Grenny. If you find yourself having lots of these appearance-related feedback sessions, consider incorporating a discussion about appearance and dress into your employee orientation process. It doesn’t have to be long. Even five minutes of describing how people typically dress at your company can prevent future problems and make newcomers feel more at ease.

Back when Bryan Clayton, the CEO of GreenPal, a web and mobile app that helps people find lawn care services, was in the landscaping business, he managed Ross, an employee who had just been promoted to a supervisor position. Ross was excited about the new job but “continued to dress like he did when he was an hourly worker,” says Bryan. “He was wearing cutoffs and T-shirts without the sleeves. Often times, it looked like he came straight from the gym.”

As a supervisor, Ross had to interact with customers throughout the day and Bryan reflected on what Ross was conveying. “If I walked into an establishment other than a gym, and this was the image that greeted me, my first impression would be that the organization is extremely casual and laid back. It wouldn’t instill confidence,” he says. He recognized that they didn’t have rules about dress “clearly posted on a wall or in a handbook,” so it was his responsibility to explain them to Ross.

He set up a private meeting and started the conversation by complimenting Ross on his work: “I really appreciate the way you took charge and started making things happen. You’re definitely the right person for this job.” Then he owned the problem: “I just realized that I screwed up and failed to share with you the expectations around dress or appearance that go along with this position. That is my fault, and I am sorry.” He went on to explain why supervisors at their company dress differently than workers: “Take it from me, it is easier to lead if you look like a leader, so we must hold ourselves to a higher standard. If you look around at all of the other leaders in our office, you will notice that they are not wearing shorts and tank tops. If you look sharp, neat, and organized, people tend to take you more seriously.”

Ross reacted positively, Bryan says: “Because I addressed it as my fault and didn’t assign blame to him, he took it very well. I did everything possible not to embarrass him or cause him to feel like he let me down.” Bryan saw immediate changes. “The next day, Ross showed up in brand-new khaki pants and a Ralph Lauren polo shirt. I could tell he knew he looked good, and I, of course, told him so. Two weeks later he pulled me aside and sincerely thanked me for caring enough about him to bring this to his attention.”

Case study 2: Be an ally in solving the problem

Martha Shaughnessy, the founder of Key PR, a public relations firm based near San Francisco, was concerned that the dress of one of her employees, Beth (not her real name), was holding her back. “She was at the point in her career where she wanted to be a primary client contact,” Martha says, but she suspected that Beth wasn’t getting the respect she deserved because her clothes, while stylish, were often more appropriate for “evening than the office.”

Martha took Beth out to lunch and explained why appearance was important in their field: “As PR professionals, we are in a service position, often with older, male clients, and we need them to take us seriously.” She noted that male-dominated Silicon Valley was a particularly tough place for people in their field to make inroads, especially for women. Then she was very straightforward: “If you give a client or reporter any reason to think for a second about what bra you’re wearing, you’ve undermined yourself.”

Beth seemed embarrassed and a bit defensive at first, but she came around when Martha emphasized that her main goal as a boss was to help her employees succeed. “We were soon talking about affordable brands and trusted outfits for formal and more casual settings,” Martha recalls. “We even talked about how unfair it is to have to think about all of this, especially in the Valley, where jeans, T-shirts, and a hoodie are standard wear for even the top executives—the male ones, anyway.”

Beth took Martha’s advice to heart. “She’d even sometimes walk by my office’s glass wall to show off an outfit,” Martha says. Beth took on more responsibility at the firm, and Martha knew her feedback had resonated when, several years later, she heard Beth offer the same thoughts about appearance and dress in a subordinate’s review.

Author Amy Gallo is author of the HBR Guide to Dealing with Conflict at Work.