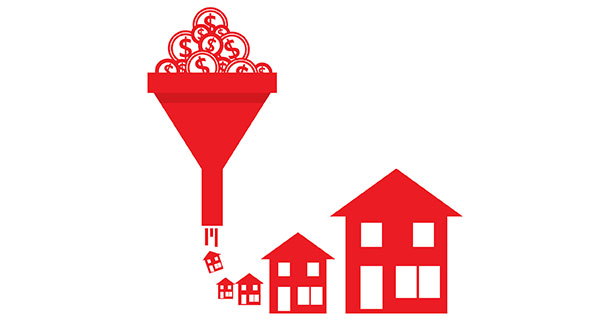 The returns that large-scale single-family rentals (SFR) are producing are now measuring up to institutional standards and the management is under control. It wasn’t pretty, but the naysayers who said it was impossible to operate massive national rental portfolios have been proven wrong. The results are in, and the institutional investment world loves SFR.

If history is our guide, SFR is going to take its place alongside the other real estate food groups, most notably multifamily housing, and become a largely institution-owned asset class. The stage is set and the path has been cleared, so what is happening now, and next?

Multifamily and SFR are sister asset classes. Two sides of the same coin: rental housing in America. They developed as asset classes on two completely different tracks. Multifamily got its legs in the 1990s.

When deregulation allowed small banks to make risky investments in real estate development in the 1980s, and a market crash caused those banks to fail on a grand scale the government stepped in and formed the Resolution Trust Corporation to clean it up. The ensuing fire sale of commercial assets attracted capital like a dinner bell, and the government stepped in again to facilitate by exempting REITs from federal corporate tax. That rule change in 1993 ushered in the modern era of REITs, and institutional capital flowed into commercial real estate at a feverish pace.

A couple of decades later, the $3.4 trillion asset class of multifamily housing is 55 percent institution-owned, according to the U.S. Census Bureau and Amherst InsightLabs. That’s almost $2 trillion in rental housing owned at the institutional level.

What kept single-family rental housing from following this path? For one thing, the market crash in single-family didn’t happen in the late 1980s, but 20 years later. The similarities are striking. Changes in government policy lead to risky lending practices, which leads to a bubble and a bust. Government and emergency managers take over to work out the mess. Investor capital comes flowing in.

Investors save the day

When the housing market was flat on its back in 2010 and the daily drumbeat on the news was about a housing collapse, homebuyers were hiding under their beds and demand was down. The negativity caused millions of people to forget what they knew intuitively—that the housing market’s health was tied to raw population growth, and a recovery was inevitable. Homebuyers could not see that the crisis was explainable, self-inflicted, and temporary. Millions of people literally walked away from houses they could afford, but believed the talk of meltdown and ran away. Seven years later, that home is worth more than they paid, but their credit still suffers.

The herd lost faith, but there was another category of demand that didn’t. People who maintained their belief that when it comes to housing in the U.S., after a crash comes a boom. You know the players: Invitation Homes, American Homes 4 Rent, Colony, American Residential Properties, Waypoint, Amherst, Progress Residential, Silver Bay, and the rest of the pioneers of institutional SFR.

The leaders of these companies deserve credit for betting the farm when the rest of the market was running scared. Their investment, along with tens of thousands of small- and mid-sized investors, gave the market a bottom in 2011. That was the year prices flattened and the recovery began. According to RealtyTrac, homebuyer demand fell 17 percent in 2011, while investor purchases soared more than 40 percent. Investors rarely get credit for it, but they were truly the heroes of the housing crisis.

The heroes of the housing crisis

The largest investors were confronted with a task many thought impossible. Prominent players in commercial real estate said that acquiring, renovating, leasing, and managing thousands of houses across the country could not be done. Literally, at a time in history when we are all carrying supercomputers in our pockets, some of the brightest minds in commercial real estate asserted that large-scale SFR was impossible.

Like pioneers settling a new land, the first major SFR investors were confronted with a dense forest they needed to cross. With the help of a new industry of innovators, they hacked their way through, got to the other side, and proved that SFR can generate a 60 percent net operating income or better when running at scale. Their successful IPOs, securitizations, and capital recycling is akin to widening the trail they blazed, paving it, and then creating a 10-lane highway upon which capital can flow (and tolls can be collected).

The government’s role in SFR

It is clear that the federal government was a great enabler in the recovery of commercial real estate in the 1990s, setting in motion the modern era of real estate investment trusts (REITs) by creating that unique tax exemption. The feds are poised to play a similar role today.

Earlier this year, Fannie Mae made an astounding announcement that they were backing Invitation Homes’ IPO to the tune of $1 billion (I consider the GSEs to be extensions of the federal government). The recognition of rental housing as a critical part of the overall housing market was a breakthrough that is now spreading to Freddie Mac and the Federal Housing Administration. These organizations, which focus on providing affordable housing by offering low-cost financing, have been unfriendly to investors (and their tenants) for decades.

FHA loans were available to investors from 1934 through 1989 when concerns over investor loan performance during the economic downturn caused HUD to take FHA loans away from investors. A HUD report from 2015 recommended that FHA lift the restrictions imposed in 1989 to help create more rental supply for low- and moderate-income families. The report cited the following motivation it suspected had compelled HUD to eliminate investors from FHA single-family loans:

“Although there were differences between investor and owner-occupant loan performance, the prevailing understanding among FHA staff and industry representatives interviewed is that investors were eliminated from the 203(b) program for philosophical reasons rather than solely because of performance. The primary driver reportedly was a political conviction that the government should not be supporting individual private investors (although it continues to support investors in multifamily housing).”

The proposal to lift the restriction on FHA lending to single-family investors failed in 2015, but now there is a new attitude in Washington about public-private partnership, and the idea is back. The key statement in the excerpt above is in parentheses. HUD does support real estate investors of rental property, but only when it’s a multifamily apartment building. It is easy to predict that in this political environment, where eliminating regulations to spur economic activity is the “in” thing to do, this regulation won’t last long.

I believe HUD, Fannie Mae, and Freddie Mac will all adapt their single-family loan programs to be friendlier to SFR investors. More importantly, HUD will adapt its very popular multifamily loan program to apply to single-family portfolios. That would be a massive tailwind and would speed the consolidation of the SFR asset class by spurring more transaction activity.

If the political conviction resurfaces that the government should not be supporting individual private investors, the point will be made that lower cost financing contributes to lower cost rents. If affordable housing is the objective, what’s good for the landlord is often good for the tenant.

One notable headwind to this momentum in government is the National Association of Realtors (NAR) and their very well-funded lobbying effort. NAR is really the trade association for the homeownership industry, and they’ve done a fantastic job in that role. Unfortunately, they view investors as competitors to first-time buyers, who are the “little guys” in their world. NAR President William Brown recently wrote that “investors drive up the price of rents and remove affordable inventory from the hands of American homeowners.”

NAR should get behind the SFR industry, and there are two good reasons why. First, tenants are people, too, and deserve to live in safe neighborhoods in good school districts. Secondly, according to NAR’s own report, more than 1,000,000 home sales every year are investor purchases. These are good customers to the NAR members, and they deserve consideration.

The REO industry can help

Valuation, preservation, title, legal, brokerage, technology, data, and logistics are essentially the same whether the asset is being disposed of or acquired. Many of the people and companies that played their role in REO are finding that same role is needed in SFR. If the distressed servicing industry were to expand the definition of its market space to include institutional SFR, the universe of possibilities for its participants would expand. A trillion dollars of consolidation lifts many boats.

Author Greg Rand is CEO of OwnAmerica, a marketplace for stabilized portfolio of SFR.