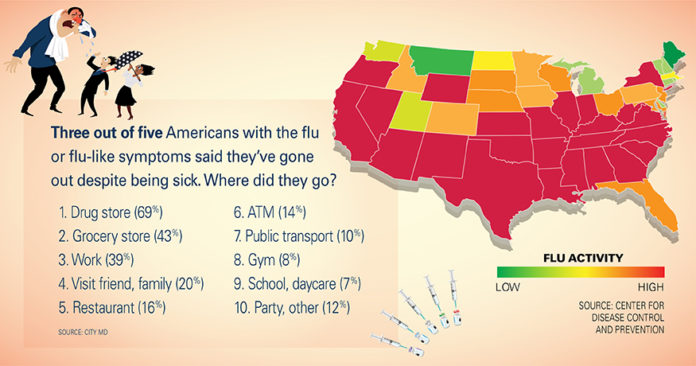 Church services across the country make regular announcements encouraging those not feeling well to stay home, and not shake hands when greeting each other.

Hundreds of school districts have officially closed due to widespread absences or the reported severity of cases in the community.

It’s estimated that over 11 million employed adults will call in sick this flu season, while as many as 39 percent of the workforce will come to work even when they’re feeling ill according to a survey by CityMD. Elevating the numbers, this year’s flu vaccine is only about 30 percent effective, and Tamiflu, which shortens the length of sickness, is in high demand across the nation. Flu is most contagious in the early stages of infection when symptoms may be just a runny nose and cough, rather than when most feel too sick to come into work or go out in public.

Why is this season so bad?

The dominant strain of flu circulating this year, H3N2, is a tougher type that resists vaccines. Many describe the onset of symptoms as being “hit by a freight train” because it’s so rapid and intense as the first signs of infection appear.

Even mild strains of the flu virus can result in serious complications. Contracting the flu can lead to a weakened immune system, which causes victims to become susceptible to potentially deadly bacterial infections, such as pneumonia. Influenza can further aggravate already existing chronic conditions, particularly among older adults, leading to death.

Catch it by breathing

Cover your mouth when you cough and wash your hands regularly. You’re covered against the flu, right? Wrong.

“People shed virus all the time, even when they don’t cough,” says Donald Milton, author of a recent University of Maryland School of Public Health study. The bottom line, he says, is to avoid others when you experience flu-like symptoms.

The study measured the droplets that people shed while simply breathing and talking, as well as while coughing and sneezing.

While the likelihood of airborne transmission is still debated in the medical world, the Maryland study suggests that even if the sick person is simply breathing your air, you are at risk of infection.

What can you do?

The best defense is to get a flu shot and wash your hands. Even at a 30 percent success rate against H3N2, the vaccine is helpful to high-risk groups including pregnant women, children, seniors and others with pre-existing illnesses such as diabetes or lung disease.

After getting vaccinated, hand washing is the next most important step to take to avoid any infectious disease including flu, colds, hepatitis A, meningitis, and infectious diarrhea, according to the CDC.

Finally, your last line of defense is maintaining your immune system. A healthy lifestyle—good nutrition, regular exercise, adequate sleep and more—determines how well your body will resist and fight exposure to infectious diseases. Unfortunately, the expensive surgical masks sold in pharmacies aren’t the solution. They are simply unhelpful in crowded places if you’re sitting next to someone with the flu.

Communication is key. As apartment owners and operators, we have an opportunity to encourage personal prevention habits—staying home when sick, practicing proper hand washing and covering your mouth when coughing or sneezing. Such informational campaigns proved beneficial in reducing transmission in previous national flu outbreaks.

Apartment communities should have flu preparedness and emergency response plans. Such programs communicate to residents essential refreshers on those actions that reduce the spread of the flu, offer referrals to local vaccine providers, medical help and where to buy antiviral drugs (Tamiflu, Relenza), and include a system to perform discrete well checks on the communities’ high-risk population.

Operationally, apartment managers can also devise staff schedules that maintain essential services in the face of absenteeism and allow team members to step in to help others as needed.

In addition to responding to the current flu outbreak, preparedness benefits your community in the face of any other potential biological, chemical or radiological emergency or natural disaster.

The 1918 flu pandemic (H1N1) infected 500 million people around the world and resulted in as many as 100 million deaths. Researchers recovered the 1918 virus and concluded that transfection in animals contributed to rapid respiratory failure in those infected, often exacerbated by malnourishment, overcrowded medical facilities and poor hygiene.

Today’s population is 4 times larger and exponentially more connected through air travel than during that earlier pandemic. Sadly however, current vaccines are still based on 1940s research. We must continue research toward a universal flu vaccine, but that remains years away and H3N2 is here and now.

Until a universal vaccine is available, apartment businesses can guide residents to find assistance and provide knowledge that encourages those human behaviors that slow the spread of such viruses. 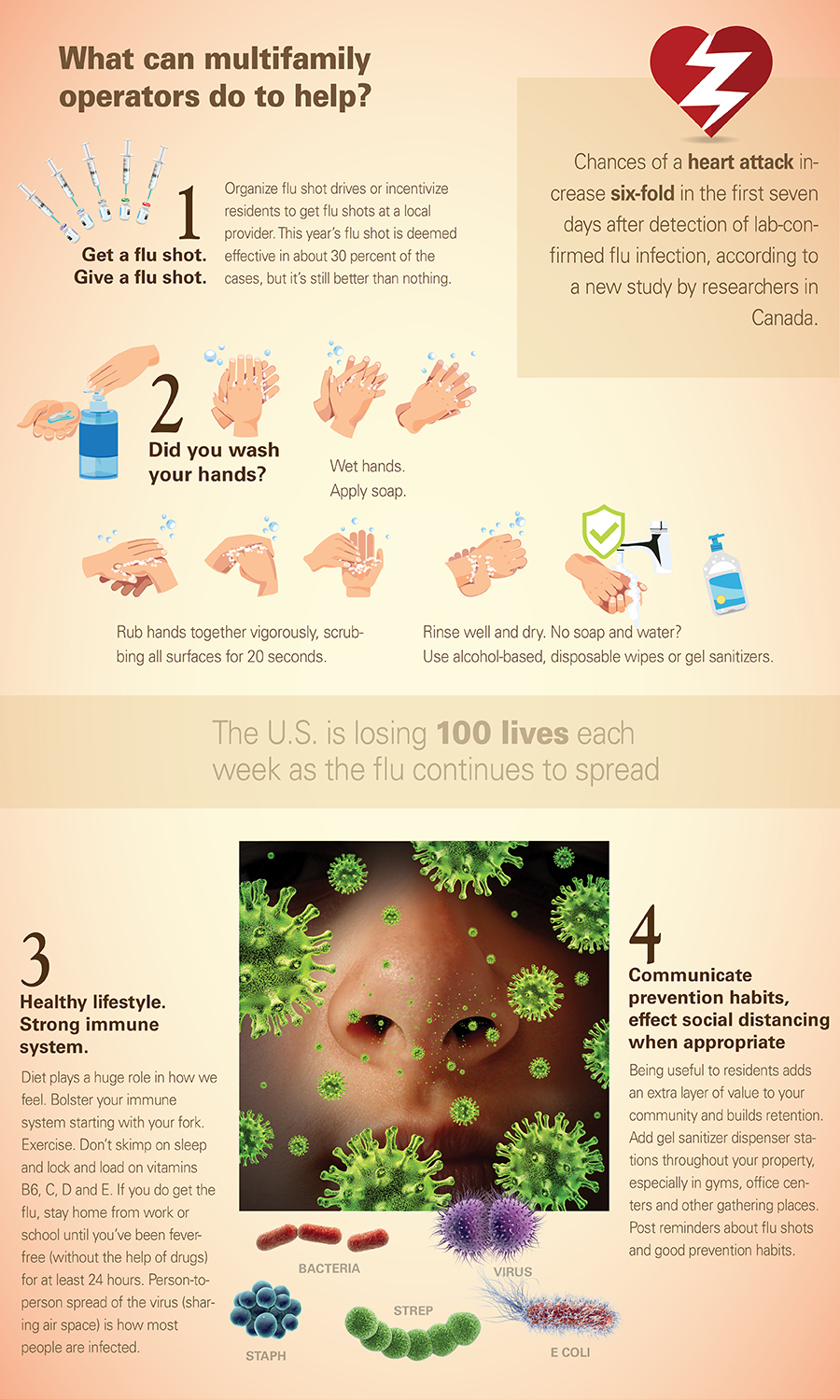