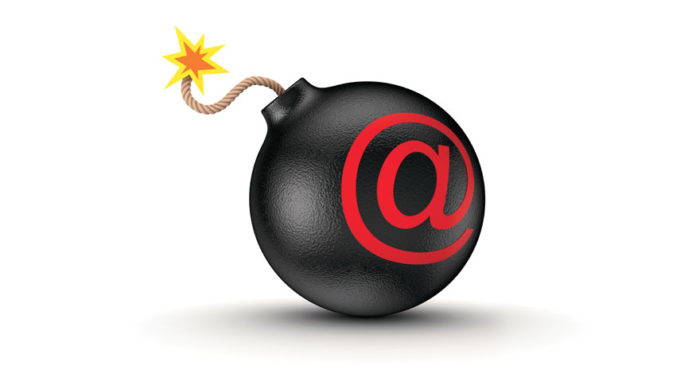 Lee had spent the entire weekend preparing for the presentation. Not only did he know the numbers inside and out, he was also excited to get some face time with the board. Performing well would be a good move for his career. So, no, Lee wasn’t really “good with this.” He was crushed, defeated, and felt betrayed. But could he really say that in an email? And if he did, would anything change?

We’ve all had surprises like this show up in our email. I call them “email landmines.” Hidden among most of the safe emails we receive each day are a handful of digital doozies that quickly turn conversation into conflict.

Below are six categories of email landmines you’ve likely seen before. These seemingly innocent communications signal that an otherwise routine exchange is about to escalate.

Drive by: When someone uses email to make a demand or announce a controversial decision and hopes nobody responds. While it may be an honest mistake when there is ambiguity over who owns decision rights, it feels like the sender is intruding on your turf.

Drama dodging: When someone uses email to avoid the “people side” of a conflict. They’d rather interact with the keyboard than with a coworker. Again, many of us get so caught up in our tasks that we forget we’re dealing with people. But the end result of these emails is that the recipient often feels ignored or disrespected.

Wearing a wire: Using email as an underhanded way to get everything in writing, perhaps to create a sharable paper trail. This landmine may also include the naïve sharing of sensitive information that has no place in a written exchange.

Pontificate on a position: When someone lays out their arguments in excruciating detail so as to not have to deal with questions, disagreements, or interruptions. There’s a time and place to flesh out your logic in writing. But typically, email is not it. It can be infuriating to open an email to find a five-paragraph treatise.

Convenience mail: Using email because the alternatives would require scheduling a meeting, making a call, or simply getting up from the chair. We all make this error from time to time. After all, one of email’s most winning virtues is convenience. However, when you’re on the receiving end, these emails feel inconsiderate, unnecessary, and self-important.

Typed tirade: When someone launches an attack from the safety of their cubicle, saying things they’d never dare say in person. We’re all familiar with these because most of us have been guilty of doing it.

We can understand these landmines better if we look at them as dialogue disrupters. Successful email exchanges involve dialogue. We use the exchange to add to a pool of shared meaning. The more information we have in the pool, the better prepared we are to make decisions and get results.

Mutual purpose is the entry condition for a meaningful exchange of ideas. If you can’t align around what you’re trying to achieve, then you’re likely to end up with competition and strife. These email landmines signal a selfish focus, at the expense of common goals, that often shut down dialogue.

Mutual respect is the continuance condition for dialogue. Constructive conversation will cease if you show disrespect, disgust, or contempt for others. These landmines all signal some level of disrespect, and will prevent an honest exchange.

When mutual purpose or mutual respect is violated, people feel defensive, unsafe, or hurt. The temptation is to respond in kind, with an attack of your own. That’s how email exchanges escalate into unhealthy conflict. Luckily, there are strategies to handle these landmines.

Schedule a call. Don’t respond to the content of the email. Instead, reply and ask to schedule a call. Use a text message, if the issue is time-sensitive. “Got your email, let’s talk. Would 2 PM work for you?”

Meet face-to-face. An in-person meeting is the gold standard. Seeing each other’s faces while you talk is far more important than people realize. It helps you understand what others are thinking and feeling, as well as what they are saying. If that’s not possible, then use a video conferencing app.

Demonstrate respect. You’ve already seen signals of disrespect. Counter them by declaring your respect. “I care about your concerns and I value your opinion.”

Focus on facts. As you begin to discuss the content, avoid making judgments or stating conclusions. Instead, stick closely to the facts: details and data. Focus on any gaps between what you expected and what you observed.

Quickly check for understanding and agreement. We call the beginning of any conversation “the hazardous half-minute,” because you’ve got only 30 seconds to state your case before asking for the other person’s point of view. If you talk any longer, the other person will feel lectured to.

Email can be an efficient and convenient way to communicate. But when digital communication leads to conflict and slow decision making, it’s time to get out from behind the screen and have a dialogue.