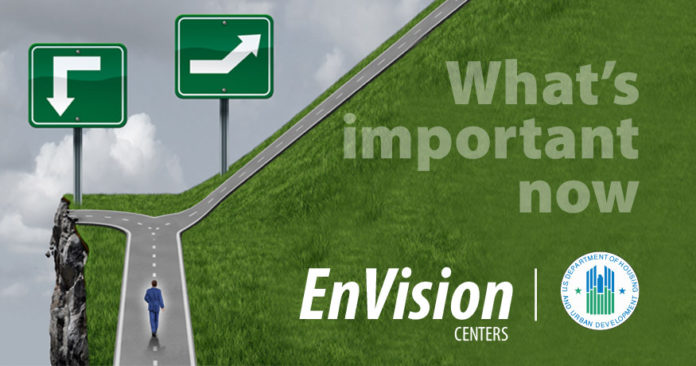 The HUD budget is out. Self-actualization is in. The $41.24 billion spending plan focuses on housing three vulnerable populations: the homeless, the elderly, and the disabled. HUD is zeroing in on these groups with the intention of stabilizing or expanding their rental subsidies, while transferring other programs to the state level. The budget focus:

The flagship of the budget and Carson’s primary focus are the HUD EnVision Centers—the agency’s one-stop shops for those seeking federal services. The centers are a key device for breaking down multiple silos of government and for co-locating services to the benefit of those needing them.

The first of ten pilot centers opened in Detroit a couple of months ago and will serve as a catalyst for public-private partnerships within the respective communities. In addition to centralizing governmental agencies, HUD EnVision Centers will house community-, non-profit, mission-, faith-based services and more. The other 9 pilot locations are expected to be announced in the next weeks.

Sec. Carson has made it clear that financial support for the poor is not enough. HUD’s focus will now shift into providing vulnerable families and individuals the services to empower them toward self-sufficiency, and eventually into the private market.

While it’s unknown whether Eugene, Ore. will land a pilot HUD EnVision Center, its local news group recently launched a fascinating study on homelessness and its many causes. The city has been focused on the local homelessness crisis, as well as scrutinizing the local efforts that have proven helpful in relieving this growing concern.

“The variety of separate problems contributing to homelessness is as broad as the Mississippi, with tributaries flowing from the economy, prisons, hospitals, addictions, the housing market, abusive relationships and more. Seen this way, addressing homelessness involves paddling upstream to improve job skills, create paths for re-entry to society after a period of incarceration, treat mental and physical illnesses, provide opportunities for recovery from addiction, build affordable housing, protect vulnerable women and children and, essentially, correct every deficiency or dysfunction in American society,” said Tim Brinton in his article, “Complex, but not impossible.”

The ”housing first” concept, a foundation of the HUD EnVision Centers, says that once a person has a home, other problems—from mental illness to a lack of job skills—can be more successfully addressed. In other words, homelessness is rarely a single-pronged issue and alleviating the “homelessness crisis” does little for the systemic problem.

HUD EnVision Centers focus on the whole human being. The program seeks to build four key pillars thought to lie at the heart of independence: character/leadership, educational advancement, economic empowerment and health/wellness. In building awareness around this approach, Sec. Carson is bringing in a number of community icons to help with messaging. Think football.

Coach Lou Holtz is one of the most successful college coaches ever—a true legend and inspirer of greatness having led over six different organizations to bowl games. Holtz retired in 2004 to become a motivational speaker, author and commentator. Who could forget the memorable one-liners in his 2015 commencement address at the Franciscan University of Steubenville, Ohio, which went on to garner over 1.5 million views on YouTube.

Coach Holtz is partnering with Sec. Carson on the HUD EnVision Centers.

“We’re talking about getting people to make good choices,” said Holtz. He’s aligning his What’s Important Now (WIN) strategy with Sec. Carson’s program. WIN is an acronym used by Holtz with his players at Notre Dame to help them focus on the choices at hand that will have the greatest and most lasting impact on health, relationships, careers and finances, in order to elevate their lives.

Things are beginning to look very different at HUD.