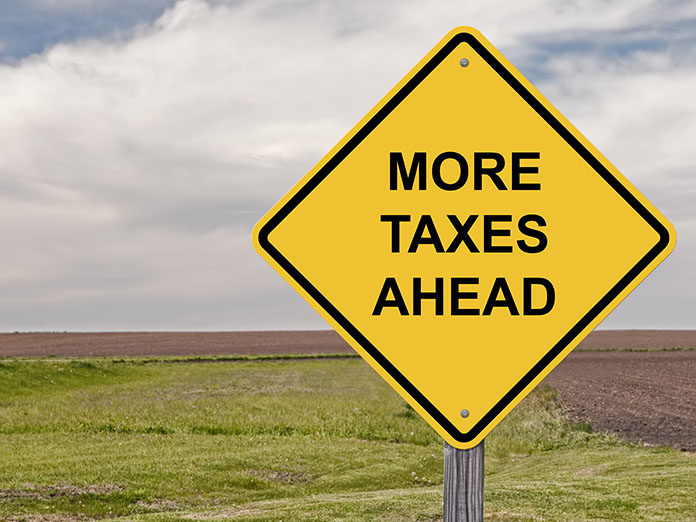 The American Hotel and Lodging Association (AHLA) called on state and local government leaders on National Tax Day, to start taxing Airbnb and other short-term rental sites with the same oversight and transparency as hotels, especially in light of Airbnb’s recent announcement that it will start including hotels as part of its listings and the continued growth of commercial Airbnb operators.

AHLA also called on state and local government leaders to reject Airbnb’s pursuit of voluntary collection agreements (VCAs) unless it includes transparency with taxpayers and the oversight to ensure Airbnb is paying its fair share. VCAs are deals Airbnb has been making with jurisdictions where the company agrees to collect and remit certain predetermined state and/or local taxes on behalf of the property owners, subject to certain stipulations, which are often strict and atypical for tax matters. AHLA says Airbnb is negotiating these deals behind closed doors and the agreements are crafted without public input and don’t include adequate oversight or auditing measures to ensure Airbnb is paying the proper amount of taxes.

“Airbnb has been making back-room deals and strong-arming state and local jurisdictions into ‘voluntary’ tax deals with no transparency, oversight or auditing capability to ensure the company pays its proper share of taxes,” stated Troy Flanagan, vice president of government affairs and industry relations at AHLA.  “It’s like putting an empty jar at the counter of a retail store and asking customers to voluntarily pay sales taxes. There’s no accountability.”

Existing VCAs negotiated by Airbnb include special treatment not afforded to other taxpayers under ordinary tax law. The table below illustrates the special tax treatment and unprecedented limitations on oversight that Airbnb has negotiated with its voluntary tax agreements with hundreds of state and local jurisdictions across the country. 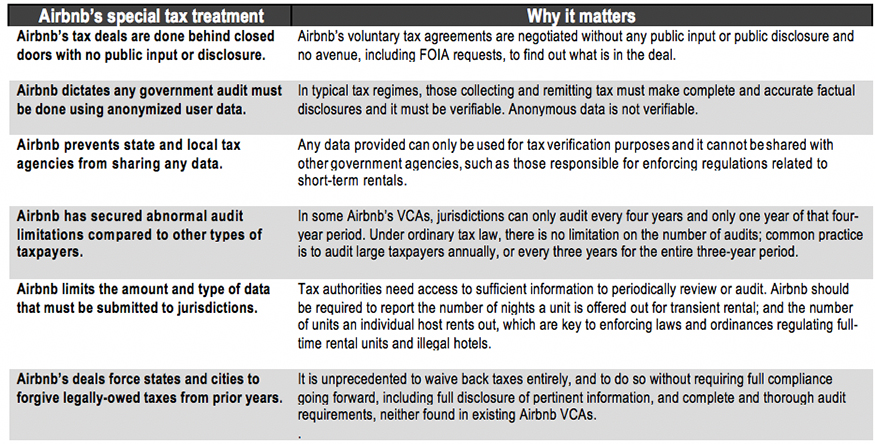 While some jurisdictions have accepted Airbnb’s voluntary tax agreements, many current and former government officials have caught on to Airbnb’s secret tax deals and have rejected them because of the lack of transparency and oversight.

AHLA urges more state and local government leaders to reject Airbnb’s voluntary tax deals and instead institute a tax policy that will collect taxes from Airbnb and its operators just like hotels to ensure an even playing field and transparency for taxpayers. In San Francisco, home of Airbnb’s corporate headquarters, the company agreed to pay back taxes and collect city taxes from its hosts.

In addition to changing the way state and local governments tax Airbnb, Flanagan says government leaders need to hold Airbnb accountable to the same regulations that hotels must follow.

“If Airbnb wants to enter the hotel business, then it needs to be regulated, taxed and subject to the same safety compliances and oversight that law-abiding hotel companies adhere to each and every day,” stated Flanagan. “San Francisco is the model for how local jurisdictions should tax and regulate short-term rentals and its working to not only ensure Airbnb is paying their fair share of taxes but also protect affordable housing and neighborhoods across the city.”

According to a 2016 analysis by Oxford Economics, hotels generated $167.2 billion in federal, state, and local taxes in 2016. Since Airbnb’s inception in 2008, the hotel industry has contributed more than $1 trillion in taxes and supported nearly $10 trillion to the U.S. economy and currently supports more than eight million jobs across the country.

Flanagan points out that Airbnb, on the other hand, still doesn’t pay taxes in many jurisdictions across the country and even in the ones it does with a voluntary collection agreement, there is no guarantee or oversight to ensure they are paying the correct amount or fair share.

“Communities across America, including their roads, schools, first responders and other public services, are getting shortchanged by Airbnb,” stated Flanagan. “Because Airbnb’s tax agreements are secret with no real oversight or public input, taxpayers will never find out by how much.”

About American Hotel and Lodging Association

The American Hotel and Lodging Association (AHLA) is the singular voice representing every segment of the hotel industry including major chains, independent hotels, management companies, REIT’s, bed and breakfasts, industry partners and more.