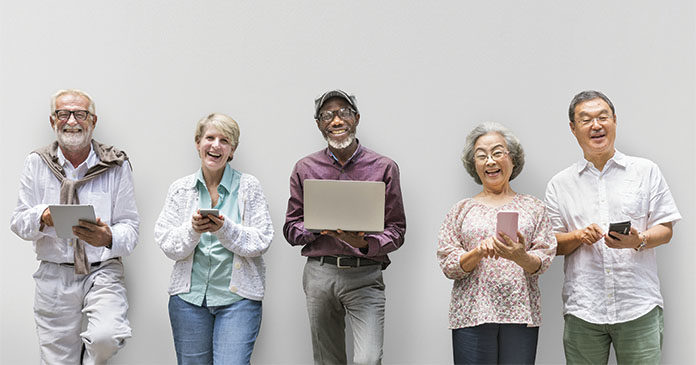 Trend forecasters rightfully focus on the housing needs of millennials when predicting the future of the U.S. real estate market. But the rising senior population, sometimes referred to as a “silver tsunami,” suggests baby boomers shouldn’t be written out of the story just yet.

“Between 2010 and 2040, we predict the nation’s 65-plus population will grow by roughly 90 percent,” says Hamilton Lombard, a demographics researcher for the University of Virginia. “In some areas of the country, most of the population growth will come from retirees.”

This ballooning number of seniors will impact industries as diverse as health care, technology, and, especially, real estate, as changing expectations around retirement mean new challenges and opportunities for developers.

Here are some of the trends—many overlapping, some contradictory—shaping how this generation will spend its golden years, demonstrating that older Americans, like millennials, are far from homogenous.

It’s easy to chuckle at news that a Margaritaville retirement community is coming to Florida (what better age for Parrotheads to pursue their day-drinking dreams?). But the billion-dollar community offers more of what today’s and tomorrow’s seniors really want: active, engaging, and walkable neighborhoods.

Seniors simply don’t want to be placed on what one developer called “islands of old age.” Urbanized developments offer seniors health and social benefits, a greater sense of independence, and more of the intergenerational connectedness they crave.

In Orange County, Calif., developers designed the new $100 million-plus Rancho Mission Viejo project as an upscale mixed-generation development, with housing catering to older adults integrated into clusters of neighborhoods. Developments like New York’s new community center for the Morningside Retirement & Health Services  showcase a renewed focus on active, communal space. A cohousing development for seniors on Oakland’s waterfront called Phoenix Commons has been compared to a “dorm for grownups.”

This lifestyle push also taps into the huge need for housing with better accessibility. According to a 2016 Harvard report on senior housing, only one percent of the country’s current housing stock includes features like zero-step home entrances, single-level floorplans, and wide hallways and doorways that are wheelchair accessible. With a greater number of seniors seeking to age in place, housing that follows universal design principles and allows for in-home health care is in high demand. 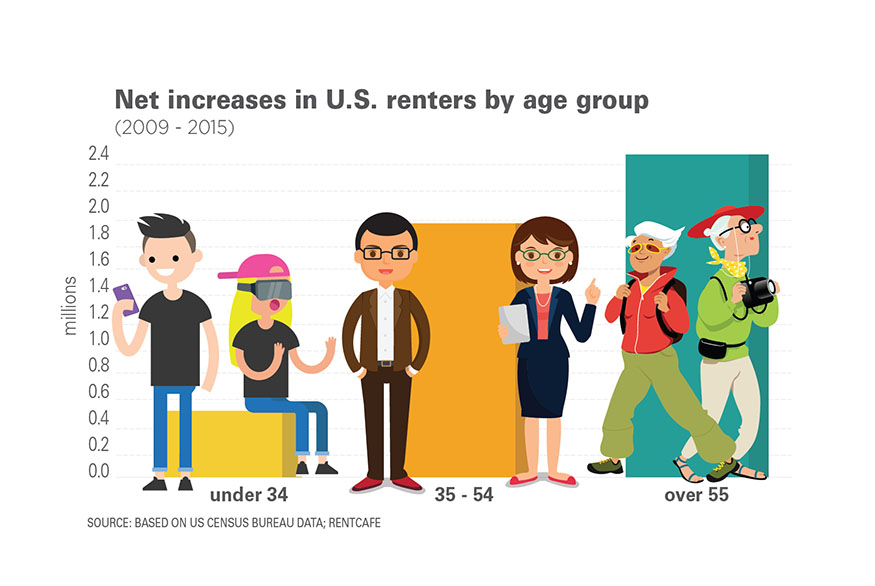 The rise of rural retirement

One of the biggest shifts Lombard has seen in senior demographics is the Halfback phenomenon. The term “halfbacks” refers to retirees from the east moving “halfway back” from Florida to the Mid-Atlantic and Appalachia.

According to data Lombard provided to the Wall Street Journal, net migration to retirement-destination counties in Appalachian regions of Georgia, North Carolina, and Tennessee increased 169 percent between 2010 and 2017, a growth rate equivalent to traditional retirement destinations in Florida.

It’s the senior equivalent of Californians leaving the Golden State for cheaper cities nearby, says Lombard. Many of Florida’s traditional retirement communities have become increasingly expensive, and communities in western North Carolina, Virginia, and Appalachia offer a lower cost of living as well as tax breaks for seniors.

It’s part of a larger growth in rural retirement. Lombard says more retirees are finding that the countryside, with its excellent views, decent hospitals, and interstates, offers a more affordable, and convenient, place to settle and downsize.

Many older Americans want to be downtown as much as their children and grandchildren, leading them to downsize and focus increasingly on urban living.

The senior rental market is booming. Between 2009 and 2015, the number of renters over 55 increased by 28 percent, compared to a 3 percent increase in renters 34 years or younger, according to a 2017 analysis of U.S. Census Bureau data by RENTCafe. And the percentage of senior renters making $60,000 a year or more rose from 11 to 15 percent between 2006 and 2016, according to Harvard data.

This has created an opening for luxury urban living for seniors. An industry report by JLL, a global real estate firm, noted that more developers are focusing on urban infill projects to take advantage of this demand.

This is, of course, only a small slice of the senior market. There is also a sizable population struggling to pay rent: The U.S. serves only about a third of adults age 62 or older who qualify for housing and rental assistance. By 2035, there may be nearly 5 million eligible seniors who aren’t receiving aid, according to Jennifer Molinsky, a senior research assistant at the Harvard Joint Center for Housing Studies.

“They are the new homeless if we don’t start thinking about the building and expansion of affordable housing options in metro areas and in rural communities,” says Robyn Stone, senior vice president of research at LeadingAge Center for Applied Research, a national association of aging services and housing providers.

In many ways, the senior market is a microcosm of the housing market as a whole. While many developers rightly see potential in new high-end construction, there’s a huge demand for more affordable units that just isn’t being met yet.