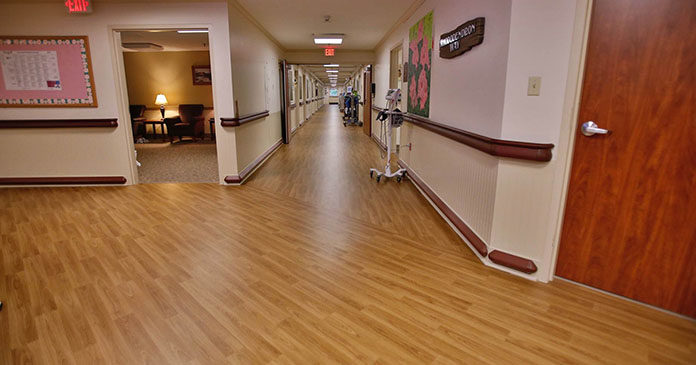 Lisa Leatherwood, MSN, RN and administrator of Silver Bluff Village, sought to refresh the design of the corridors and nurses’ station in the main skilled nursing building, a long term care facility serving more than 120 patients. Her design challenges: replace the carpet without creating a louder environment, and specify a surface that was easier for the staff to clean and maintain.

“Our main building was built in 1984, and it originally featured luxury vinyl tiles (LVT) throughout,” said Leatherwood, a third-generation family owner of Silver Bluff. “Nurses, staff, patients and families all use the halls, and noise was a major issue.”

In the first renovation, Leatherwood chose to replace the LVT with carpeting.

“It didn’t take long for the carpeting to get dirty,” said Leatherwood. “It ended up looking terrible and was difficult to clean.”

For the next major remodeling, in 2009, Leatherwood considered re-installing a hard flooring surface in the halls, but was met with opposition.

“Everyone said if I had never had carpet before, installing a hard surface would be fine; but, now that I had it, I would probably receive mutiny from the residents because the increase in noise would be terrible,” said Leatherwood.

According to Leatherwood, acoustics is a major issue in senior living communities.

“We have staff rolling patients, linen carts, food carts and refuse barrels up and down the halls continuously 24 hours a day, and that can create a lot of noise,” said Leatherwood.

In response to the feedback, Leatherwood decided to forgo installing a hard surface and instead opted for a high-end carpeting product that was 40 percent more expensive than regular carpeting.

“We were told the higher end carpet would clean up fine, that we wouldn’t have any issues and that it would last for a long time,” said Leatherwood. “That turned out to be completely wrong.”

As a result, Leatherwood began searching for an alternative to carpet. She learned about Ecore flooring after attending a skilled nursing convention.

“I was immediately interested in Ecore’s rubber-backed resilient flooring products, specifically the Rx line,” she said. “We also researched a less costly LVT brand engineered for sound control from a different manufacturer. However, when we followed up with that company, they couldn’t provide us with any resources or a customer referral to discuss noise levels. At that point, I just wasn’t convinced that LVT would be as effective as Ecore’s Rx line in sound absorption.”

Leatherwood made the decision to install Ecore’s Forest Rx surface in European Oak in the hallways of all four resident wings, a business office area and in a short wing that leads to the assisted living building attached to the long term care building.

Forest Rx features 5 millimeters of Ecore’s composition rubber fusion-bonded to the back of a heterogeneous vinyl layer. This combination creates a surface that may possibly reduce the risk of injury associated with falls while offering sound control and comfort underfoot.

“We installed the Ecore flooring in one wing at a time – starting with our most alert residents – so we could determine right away if noise would be an issue and if we received any resident complaints,” said Leatherwood.

It didn’t take long for Silver Bluff residents and staff to realize the positive results of the flooring installation.

“No one noticed a difference in noise between the carpet and the Ecore flooring, and we didn’t receive a single complaint,” said Leatherwood.

According to Leatherwood, staff also noted that it was easier to roll their carts and move residents around, as well as clean the surface.

“A damp mop and you’re done cleaning the floor,” said Leatherwood. “It’s really easy to clean and it looks great.”

The flooring installation was completed in late 2017.

“We are extremely satisfied with the Ecore floors,” added Leatherwood. “They are beautiful, they really are as quiet as carpet, and everyone is enjoying them so much. We could not be happier.”