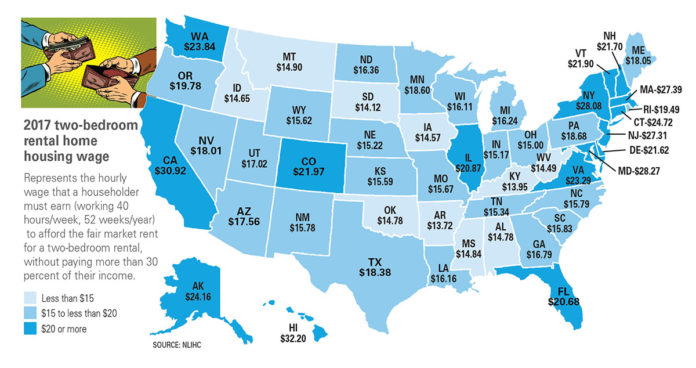 Homelessness is rising, 40 percent of Americans can’t afford basic necessities, and 38 percent of renters spend more than one-third of their income on housing. Two senators have proposed legislation to address the national housing crisis.

On August 1, Senator Cory Booker introduced the Housing, Opportunity, Mobility, and Equity (HOME) Act of 2018, a proposal to alleviate the affordable housing crisis through tax credits for renters, zoning policies to increase the affordable housing stock, and savings incentives. It comes on the heels of Senator Kamala Harris’s Rent Relief Act, proposed on July 19, the first federal response to the growing housing crisis.

While neither bill is likely to advance in the Republican-controlled Congress, together they illustrate new momentum toward national affordability legislation.

The rental tax credit in Sen. Booker’s HOME act applies to renters earning 80 percent of the area median income and who spend more than 30 percent of their income on housing, which includes rent and utilities. Eligible renters can receive the difference between their rental payment—capped at 100 percent of fair-market rent—and 30 percent of their monthly adjusted gross income. The tax credit would be paid annually after filing income taxes.

Booker’s proposal also includes an option for renters to defer 20 percent of their tax credit to a “rainy day savings program,” which could help families cover unexpected expenses that could lead to missing rental payments and, ultimately, to an eviction.

Sen. Harris’s bill proposed a credit to all taxpayers earning less than $100,000 annually. In high-rent areas, like San Francisco, the income restriction is $125,000. Like Booker’s bill, Harris’s covers the difference in rental payments between 30 percent of the taxpayer’s income and rent, capped at 150 percent of fair-market rent, at various percentages based on income brackets.

In both bills, Sen. Harris and Sen. Booker—who earned his early political stripes as a tenant advocate—propose rental assistance to those who are most burdened. Sen. Booker’s pitch takes Harris’s bill one step further by tackling the low supply of affordable units. Harris received criticism for not including this in her relief act.

Booker’s bill is more of a laundry list of progressive urbanism practices rather than actionable law, especially considering that rezoning and density are highly controversial for both NIMBYs and anti-gentrification advocates.

The country’s affordability crisis is a national issue that affects every single state and county in the U.S. It isn’t just a problem in competitive real estate markets, like New York City, the San Francisco Bay Area, Los Angeles, and Seattle.

According to the NLIHC’s 2018 Out of Reach report, a family earning minimum wage can’t afford a two-bedroom apartment anywhere in the country. There’s a shortage of 7.2 million affordable units for low-income households.

For every 100 renters in need, there are only 35 homes available. Meanwhile, existing federal assistance programs are ineffective: 76 percent of people eligible for housing assistance don’t receive it.

The effects of the housing market failure are widespread: In 2016, over one million households were evicted, with the highest concentrations of evictions happening in the southeast.

Rent burdens also aren’t solely a low-income issue; rent is becoming increasingly out of reach for the middle class everywhere. Moreover, there are more cities with larger renter than homeowner populations. Federal policy needs to catch up to demographic realities.

Addressing rent burden through tax credits receives criticism for a single lump-sum payment when it’s a month-to-month issue. Some may balk at the idea of federal tax dollars paying for someone else’s rent. But consider this: Most federal housing subsidies go to homeowners, who are typically the most wealthy.

To address the severe lack of affordable housing in America, the NLIHC generally advocates for increased rental assistance, which could take the form of a new tax credit, expanding Section 8 vouchers, or another policy change; deepening the supply of targeted affordable housing units; and cash assistance to absorb a financial shock. Expanding renter protections is another important part of the equation, according to Yentel.

“There’s no silver bullet solution to the affordable housing crisis,” Yentel says. “It looks different in every community and needs to be responded to differently by community.”

While Yentel says it’s unlikely that either of these bills will pass, she’s optimistic about positive change in the future since the affordability crisis is becoming more urgent and widespread. Yentel speculates that politicians don’t typically focus on housing, rentals particularly, since more homeowners than renters vote and there’s more turnout from high-income voters. However, as more people feel the burden of rising housing costs and stagnating wages, that might shift.

More mayors are identifying housing as their number-one problem, ahead of the more commonly prioritized issues of crime and transportation. With congressional leaders, particularly those rumored to be presidential candidates, prioritizing affordable housing, it could change the national conversation.

“It may be in the 2020 election that the housing crisis and needed solutions actually become campaign issues,” Yentel says, adding that advocates have been trying to make affordable housing a national priority for decades.

“It’s a reflection of the growing need and increasing advocacy to put pressure on members of Congress to propose solutions. It bodes well for housing insecurity to be part of the conversation.”