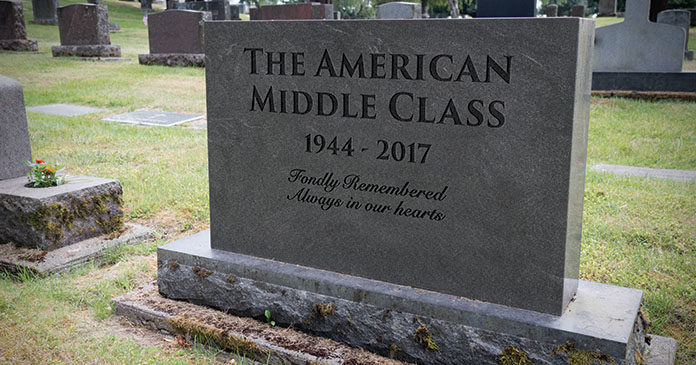 The state remains one of the most unequal in the nation—one that has both billions of dollars in Silicon Valley and rampant homelessness. The Golden State’s efforts to eliminate poverty instead accentuates it, and its tax system inadvertently aids those who are already wealthy. With the middle class leaving in droves, California’s society represents a neo-feudal mix of robber barons and poor. It’s an unsustainable mixture.

California represented the world’s fifth largest economy before the recession, falling to 10th largest in 2012 while growing at an anemic 0.1 percent per year. The state has been fortunate to be the center of the tech and internet sectors, which represent almost 10 percent of the total. Part of the growth was due to a rapidly expanding real estate sector, which heavily benefits wealthy residents.

With the mega-rich and upper class driving the state’s economy, California is unique in its ability to leave the rest of the population behind. After factoring for costs of living, California is the poorest state in the union. An average of 13.9 percent of Americans were below the poverty line in the Census Bureau’s Supplemental Poverty Measure—California was at 19 percent, well over Alabama’s 14 percent. The supplemental measure not only factors in housing costs but families’ well-being after programs like food stamps and housing assistance. Altogether, the state government has made life for poor and middle class Californians nearly unbearable.

How? California renters pay an average of $1,447 per month, compared to the $1,012 national average. In 2015 more than 40 percent of Californians spent over 30 percent of their income on housing. Today, 29 percent of them spend over half their earnings on housing. The median home value, at $529,000, is more than double the national median of $239,800. Residents who can afford rent or a mortgage are on the hook for electricity rates—burdened by green initiatives and over-regulation—that grew 500 percent faster than the national average from 2011 to 2017.

NIMBY, or “Not in My Backyard,” development and construction restrictions mean that California cities are much more expensive for the poor, with Los Angeles having the highest proportion of income going toward rent in the nation. The state and its cities use environmental and zoning laws to restrict housing, which often disallows large-scale development of apartments. The result? Less access for middle class residents.

Fewer than 40 percent of nonwhite and non-Asian students meet the state’s educational standards with a staggering percentage of education spending going toward administration instead of the classroom. From 2011-2016 the state increased spending on administration over double what it spent on teacher pay.

The state’s employee system disincentivizes government thrift and saddles taxpayers with debt that outstrips the national average. A private sector employee would have to save $2.6 million to receive the same retirement as a California Highway Patrol officer. In addition to California’s burdensome income tax, the state is home to the highest sales tax in the nation and property tax rates that disproportionately punish the poor.

Traditional left-wing prescriptions simply haven’t worked in the state, which the Los Angeles Times dubbed the “poverty capital” of the country. Housing vouchers increase the cost of living. The number of uninsured in California fell by more than half after the state expanded Medicaid, yet poverty remains near historic highs. California spends the third most per capita on welfare programs, yet the state’s economy fails for poor and working class people.

Despite having just 12 percent of the country’s population, the state represents nearly a third of the population on welfare. Federal taxpayers shell out over half of the $6.7 billion in the CalWorks welfare-to-work program. In Texas, 6 percent of families under the poverty line receive welfare—in California the figure is 66 percent. Texas’s supplemental poverty rate is a quarter less than California’s.

The combination of government overreach and ineffective program creates a brutal dichotomy of very rich and often very poor. California is the 4th most unequal state in the union, and is home to astonishing homelessness that includes diseases at camps like typhus and hepatitis. The number of homeless people in the state increased nearly 14 percent from 2016 to 2017 to over 130,000. Silicon Valley, the playground for the ultra-rich, also saw 132 homeless deaths on the street in 2016.

In many ways, California has long been an example for the rest of the nation. But the middle-class conservatism that propelled national figures like former Presidents Nixon and Reagan is gone. It’s been replaced with virtue signaling and policies by the rich that hurt struggling families. And both sides of the coin—from technology executives to families unable to pay rent—vote for Democrats that only make the problem worse.

Excerpt: Kristin Tate is author of How Do I Tax Thee? A Field Guide to the Great American Rip-Off.