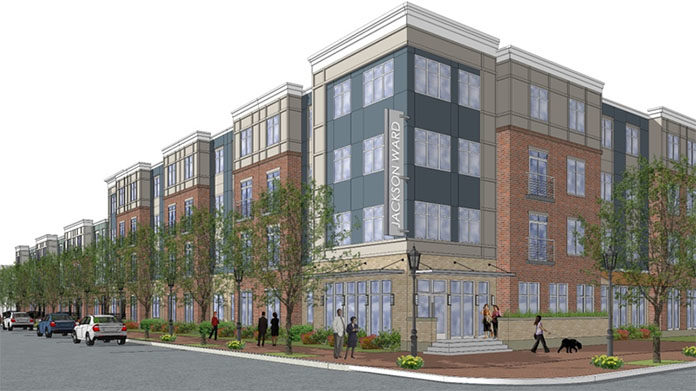 “We are looking forward to starting the lease-up of these two properties in the very near future. One will be an 82-unit (46 at market-rate) community that includes 6,000 square feet of retail space. The other will be a 72-unit affordable community for seniors moving in from the aging Fay Towers. S.L. Nusbaum Realty Co. has been selected to lease and manage all three components of the development,” said Boyce.

“The retail space will be attractive to restaurateurs or others seeking a prime location in this emerging historic section of downtown,” says Nusbaum’s Nathan Shor, who will represent the landlord in leasing the retail space.

“The apartments will meet what we believe to be a pent-up demand for brand new, quality apartment living in Jackson Ward. This historic neighborhood is the next big thing in Richmond,” says Boyce.

Community amenities will include off street parking, a dog-grooming room, media room, a fitness center, an outdoor patio and grill area, on-site management and walkable access to local restaurants. Leasing is expected to begin in October 2019 and rents in the 82-unit building will range from $900 for a studio apartment to $1,600 for a two-bedroom unit.

With over 112 years of expertise in the real estate industry, S.L. Nusbaum Realty Co. manages a portfolio of more than 24,000 apartment homes throughout the Mid-Atlantic and Southeast.