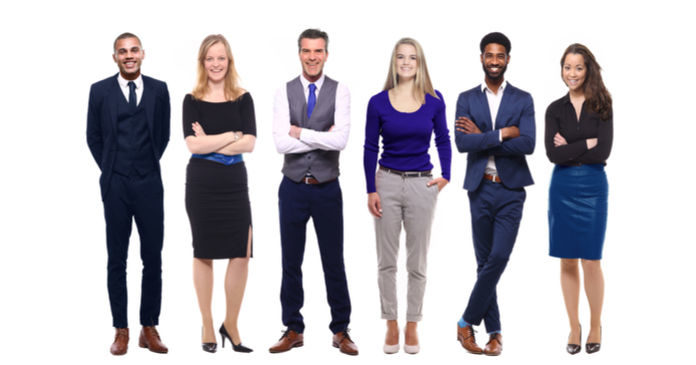 The Job Openings and Labor Turnover (JOLT) report for September was released by the Bureau of Labor Statistics (BLS) Tuesday. Its data on the parts of the job market of interest to the multifamily industry, real estate management and construction, show that employment in both sectors increased.

For the entire jobs market, the BLS reported that there were 7.0 million job openings at the end of September, down slightly from the August figure, which was adjusted upward from the original report. Hires and separations were balanced for September at 5.7 million people each, so that total employment held steady for the month.

The jobs opening rate, 4.5 percent, was higher than the unemployment rate, 3.7 percent, indicating that there are more jobs available now than there are people to fill them. This situation has been in place for several months now indicating a continuing very tight labor market.

Multifamily job growth is tracked in a part of the jobs market the BLS calls “real estate and rental and leasing” (RERL), which also includes similar businesses in other industries. The jobs data for this segment showed an increase in employment in September for the first time since May. While the number of hires in September was in line with its recent levels, separations were down significantly, largely due to a decrease in the number of people quitting their jobs. The net result was that employment in this sector increased by 12,000 jobs in September. 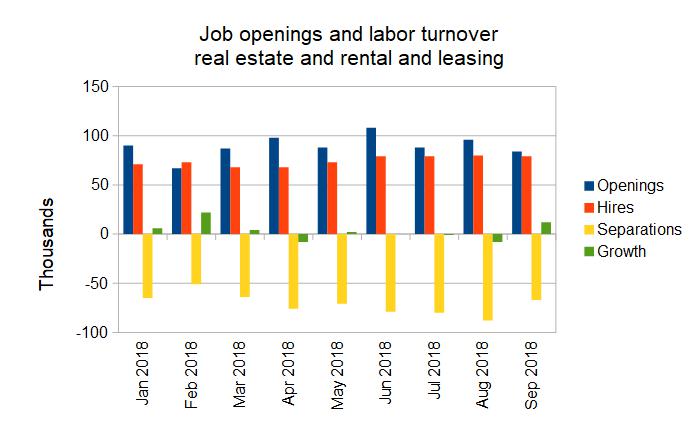 The next chart shows the turnover in the construction jobs market. In September, the number of job openings was down from the level reported for August, although the August number was revised upward in this report. Both hires and separations were up slightly from their August levels, but employment in construction still managed an increase for the month in line with the monthly increases seen since June.

Once again, the number of hires and separations in construction easily exceeded the number of job openings. This is a pattern typical of a high-turnover jobs market.

The chart below illustrates these recent trends in the construction jobs market. 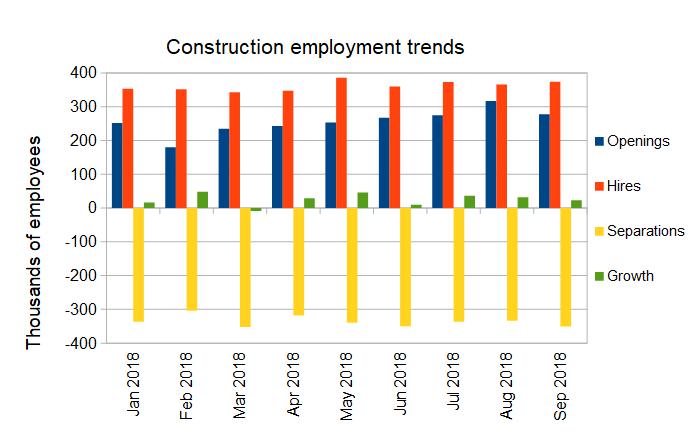 The final chart, below, shows long-term trends in the construction job market based on three month moving averages of the figures tracked by the BLS. It shows hiring has been steady recently even though openings are up. It also shows that quits have become a bigger factor in the loss of workers than layoffs, indicating that workers are more confident about leaving their jobs and the employers are more likely to try to hang on to the workers they have. 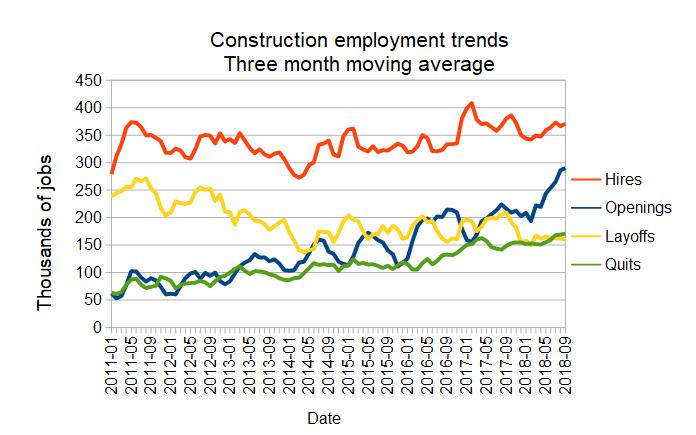